I was a very young girl when that infamous day, December 7, 1941, changed the world. The Japanese had attacked Pearl Harbor and soon after, President Franklin Roosevelt led America into World War II.

These events changed life in Little Falls also. Little Falls, a small community in upstate New York where the beautiful countryside was once dotted with many small farms, began to prepare for war. Farms, worked by many boys and men, lost their manpower as the farmhands went off to fight for their country. The line at the enlistment center in Little Falls was long and over 1,600 brave locals enlisted to go to war

I remember my dad, Anthony Pellerito, went to enlist but he was deferred or 4-F as it was designated, unfit for military service. “I broke my arm and it never healed right,” he told me. But my dad had an important job right here at home. He was an inspector at Remington Arms in Ilion which manufactured the most needed military rifles.

My mother did her part also, she was employed by National Automotive Fibers, a company that made car doors and was located at one time at the far end of West Main Street in Little Falls. The facility converted over to making parachutes during World War II. I vividly remember my mother bringing home an end roll of the thread used to sew parachutes to show me how strong it was. You could not break it if you tried.

A number of factories in Little Falls converted to wartime production. The Felt Shoe Company made combat boots, Melrose, Cherry-Burrell, and Allegro all converted to help out the cause. The epitome of the assembly line was alive and well in our fair city. Rosie the Riveter would have been proud!

All finished products from the local factories were put on flatbed railroad cars to go to New York City for shipment overseas. It was nothing to see miles of flatbed cars go by carrying war supplies. What a magnificent sight that was!

Those who did not work in the factories did their part at home. There was not a family in Little Falls that did not have a Victory Garden. Food was rationed, so you grew your own. I remember asking my mother, “what does rationing mean?” Her answer was simple, “we must do without some products so our boys will have plenty to stay strong and win the war.” Sugar, meat, coffee, gas, butter, and nylon stockings were just some of the many products that were rationed. Do you remember oleomargarine? Oleo came in a small package containing a white substance and a yellow ball that you squeezed to make the white turn yellow. Voila, fake butter!

Little Falls children joined the war effort too. They saved war stamps. We purchased stamps in school and placed them in a book and when the book was full, you turned it in for a war bond. Bonds were plentiful and helped finance those four bitter years of war.

There were also collection bins throughout the city where residents would place tin cans to be recycled to help the war effort.

And speaking of the children, let’s not forget those morale-boosting war movies at the Rialto theater on Ann Street. Every kid in town went to the movies on Saturday afternoons. Talk about exciting! Kids would scream and yell as our American heroes would down Japanese planes. Best fifteen cents ever spent!

The movies were the biggest form of entertainment in Little Falls. On Wednesday nights you could even see a vaudeville show in between movies. It did not get any better than that. And Little Falls even had two theaters. Along with the Rialto, the Hippodrome was located across from the fire station on William Street. With gas rationed, people could not go very far. They worked overtime in the factories and had extra money. That is probably why so many bars opened. At one time, someone counted around fifty bars in Little Falls, just about one on every corner!

And those great band concerts in Eastern Park (Ward Square) and Western (Burke) Park on alternating Wednesday evenings. The patriotic music of Salvi Ferraro’s orchestra is still one of my great memories. When Salvi would play a patriotic song, the cars bordering the park would all toot their horns to no end.

Yes, those were tough times and sad times too. I remember walking to Pete Lamanna’s grocery store on West Main Street to buy some cold cuts and fresh Italian bread for our Sunday supper. I would pass so many homes with small flags in the windows with stars on them to signify a member of the family who went to war. It was not uncommon to see some flags in the windows with multiple stars on them. The blue stars were for the family members in the service and the gold stars for the deceased. Sadly, way too many Gold Star Mothers were in Little Falls, forty-three men and one woman died in the service in World War II.

I think one of my saddest memories was when I went to visit my grandmother in Dolgeville. I would take a bus on Main Street, fare being a few pennies, and go by myself to visit her. She would sit with her ear to the radio to listen for news of Poland. When her homeland fell to the Nazis, she turned to me and said with tears in her eyes and said, “I will never see my family again.”

Yes, it was truly a sad time. There was not a Sunday mass at St. Joseph’s in Little Falls that Father Connelly would not turn to the parishioners and say “now let’s pray for our boys overseas.”

My most vivid memory of the war years was the endless convoys of truckloads of soldiers going off to Pine Camp (later Fort Drum). From my porch on the hill of West Lansing Street, I could see the convoys coming up Ann Street and I would race down the hill to wave to the soldiers. Hundreds and hundreds of trucks would pass by and I would shout,” good luck soldier, God bless!” Other children would join me and we would have our own rooting section! 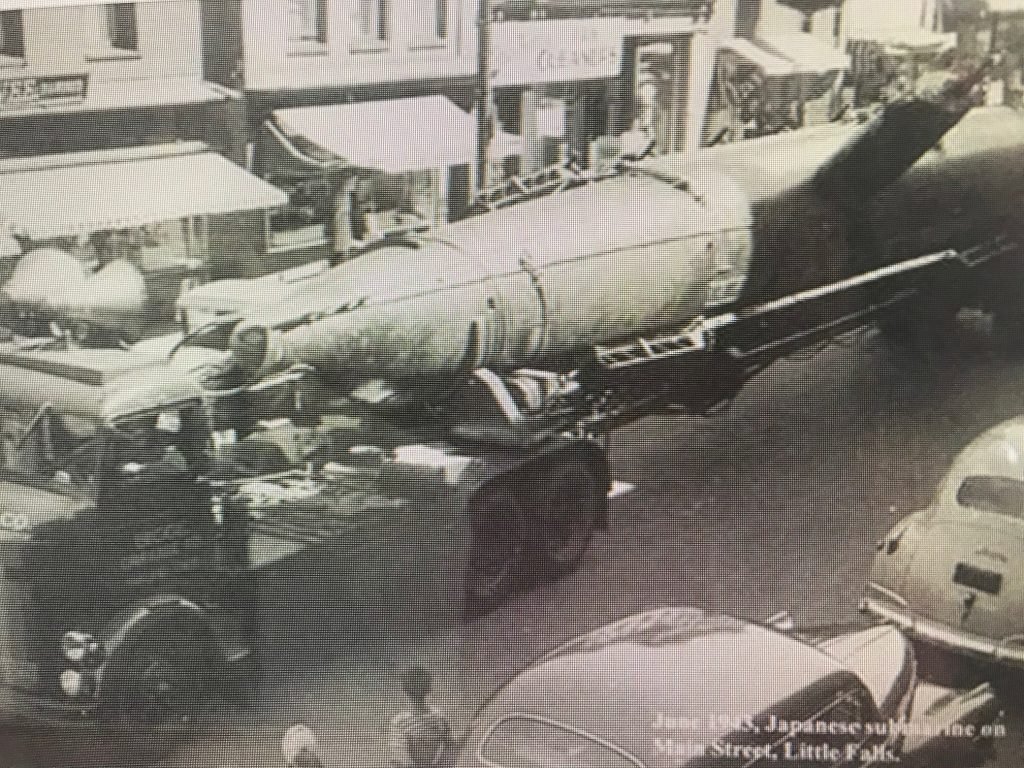 But after four long years, World War II ended in 1945. The boys were coming home and the celebrations started! Little Falls celebrated like there was no tomorrow. Parades down Main Street, cars going up and down the hills hooting their horns, church bells rang incessantly! Even the five o’clock whistle joined the commotion.

I remember Western Park having a B-17 on the grass and all kinds of war vehicles along the roads. Jeeps, ambulances, and Red Cross trucks. You could go and sit in a jeep and even get behind a machine gun in the B-17. It was time to rejoice in Little Falls and be happy once again.

For many of our elderly, this article will bring back vivid memories and for our young generation, it will be a history lesson about our great city during wartime. It has been seventy-five years since the guns were silenced, but the memories will live forever.