It’s been months since ground was broken on the two-story Rock City Centre construction project across from City Hall, but now that the COVID-19 construction ban has been lifted, the building at 690 Main Street is really starting to take shape.

The project is the vision of local entrepreneur and venture catalyst, Martin Babinec. Born and raised in Little Falls, Babinec returned from Silicon Valley to live, work, and invest in projects that are located in Upstate New York.

Rock City Centre will be the hub of businesses that he runs, as well as a location for non-profits. The name was chosen as both a tribute to local heritage, as well as a desire for the building to become a hub for local commerce and community social enterprise.

The building is an Italianate architectural design consistent with the look of many of the historic buildings along Main Street.

Babinec said that the project has been unbelievably agonizing for him in how long it has dragged out. “What started this project was me realizing that I needed to have a place to put some of the entities that I have affiliations with into one space.”

He says that it began as a small project, but that it grew. “The intent was to always have a workspace that would be useful for both commercial purposes and social enterprises or non-profits,” he stated.

He said that from the beginning, they were looking at the one-story structure at that location to figure out how to expand it to two floors so that it would have room for future growth.

”What really helped to build out the plan that we finally arrived at was getting the firm of Nelson Associates as the design and engineering firm. They put together a vision that incorporated the things that were important to me,” stated Babinec.

Some of those features were keeping the historic look of Main Street while adding some modern twists. He said, “We wanted a good blend of historic and new.”

When completed, the building will be two floors but has been expanded to include a rooftop deck. Babinec said that as they get comfortable with the space, they’ll be bringing on some additional tenants.

Right now, the expected completion date, baring any problems is mid-December. “We’re still trying to push it along. There’s no question that COVID pushed us back at least three months off the original timeline,” he said.

This is the first commercial building that Babinec has built, and his biggest surprise? “The complexity of a building of this size and our desire to keep some of the original building. This was not a bulldoze from scratch project.” 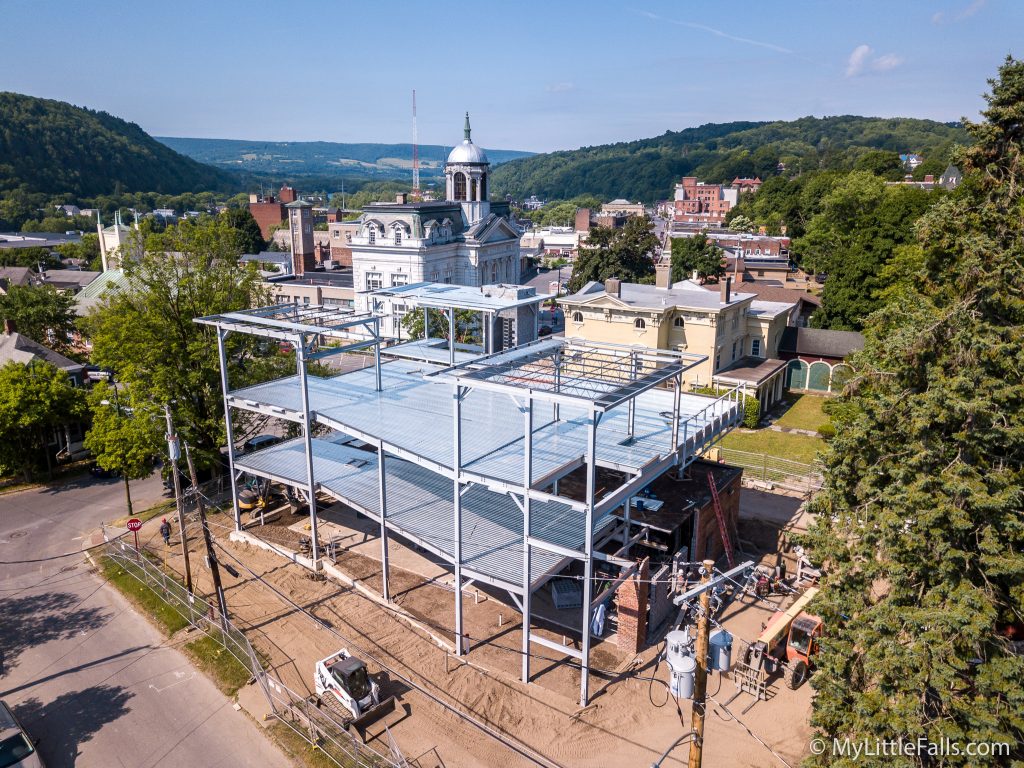 Photo by Dave Warner – Rock City Centre building and the view of downtown.

They’ve kept some of the original walls and some of the structural steel that was in the original building. “To achieve the final design that we have has been complicated and certainly a surprise,” he stated.

Babinec said that a lot of the design decisions had to be made step-by-step. “From a design perspective, this will be a Class A office space. Not anything like this will be found in the local area.”

He said that the amenities that they will have inside will be very leading edge and incorporate how offices are used in many of the leading tech hubs.

”It will be a combination of open areas that are configurable and very tech equipped conference rooms, and even private booths for one to three people,” Babinec said.

He also said that the goal is to prepare for what they believe will be an increasing number of people coming to Little Falls who have the potential to work geographically independent from their employers.

“I anticipate that we’ll have both small office settings within the building for some companies, but probably some co-working opportunities for remote professionals,” he stated.

He believes that the growth and success of Little Falls over the last decade and the number of real estate transactions that continue to trend upward with people from out of the area moving here means there will be more people needing the kind of space that they are going to provide.

COVID had them make a few tweaks to their furniture layout and selection, “but I wouldn’t say that it made us go back to the drawing board for the building,” he said.

As a result of some of the future tenants that they expect to attract, they are hoping that it encourages the growth of other technology opportunities for the community, such as high-speed fiber.

”There are elements of this design that are very eco-friendly, which will make it desirable from a tenant standpoint,” stated Babinec.

Babinec said that the City of Little Falls has been very supportive. “They’ve worked with us throughout the permitting process and have been very helpful in advancing what is a complex project.”

He said that he regrets the inconvenience of the construction, noise, and appearance that it has right now, but they’re trying to wrap the project up as quickly as possible.

“When this is done, we hope it will become an iconic building that will stand out for Little Falls,” Babinec stated.