Another company setting up shop in Little Falls

Luminati VTOL and owner Daniel Preston are already here and have been quietly working away at PEMS Tool and Machine on Southern Avenue. However, this week, they’ll be stepping up their footprint in Little Falls with the pending purchase of the former Redco Foods facility on Hansen Island, which according to Preston, should close before the 1st of June.

Luminati VTOL was formed with the acquisition of a number of rotorcraft companies, designs, and manufacturing rights. Their focus was on acquiring advanced coaxial and compound helicopter capabilities. According to its website, Luminati VTOL is designing manned and unmanned vehicles for commercial and defense applications.

A verbal agreement for early possession has been reached to allow the company to move equipment into the Redco facility before the purchase closes, but not begin operations. In order to do that, Luminati VTOL has to have insurance. According to Preston, “that policy is being put into place.”

Custom LIBA Max 3 and LIBA 150 Machines will be trucked up from Long Island into the facility on Hansen Island this week as part of that early possession agreement and the video below shows them in operation. They are robotic textile-like machines that make woven composite fabric. “We can produce anything from hard armor to soft armor to ballistic composite structures, to airframes,” stated Preston. “We can do various specialized armor on those machines.”

“What we’re going for is applications that couldn’t exist unless it was better than spec. So, we’re trying to go for enabling applications and that’s a little bit of a slower pipeline,” he said. “They end up being really good programs for the company and the community if you get them.”

Preston purchased the former Masonic Lodge on Prospect Street in July of 2017 and then followed that up with the purchase of the Vincent Manufacturing building on Mill Street in November of 2017.

Who is Daniel Preston? He stated “I’m an engineer, inventor, and entrepreneur. I just like to be productive and creative.”

He is moving the company to Little Falls from Long Island, so it begs the question as to why here? “I fell in Love with Little Falls. A very good friend of mine based in Rosendale New York sent me a picture of a property for sale here (the Masonic Lodge) and I was just enchanted by the photograph of it and I came up here the next day.”

According to Preston, he felt that Little Falls would be a wonderful place for his son to grow up. “I kind of felt like the City was a little time capsule where time stood still in a good way and I love it. Being somewhat of an industrialist I connect to that part of the history and there’s no reason that legacy shouldn’t continue here.”

Preston started envisioning what could be done here with the talent pool that was available. “There are hard-working honest people here and there’s a proximity to the defense community at the Rome airport (the former Griffis AFB) and everything just seemed like it fit,” he said.

He acquired a number of smaller rotorcraft companies and designs “and it was my intention just to move something up here small. But, as things started jelling, and the partnership with Peter and Isabella (Stone – owners of PEMS), I just kind of made the decision that this is where I want to be and live and I’ll move everything up here,” stated Preston.

The first time Preston met with the Mayor, he said that he was going to bring the rotor manufacturing business up here and that if things went well, they’d start making rotor hubs and start branching out to make other parts as it made sense.

Preston said “I was going to leave the composite work back in Long Island, but since then, I just made the complete decision that my life is really here, not there.  I’m going to be a landowner and investor on that property (in Long Island), but I’m two feet out the door and I don’t really enjoy being there. I enjoy being here.”

In order to speed things up, all parties involved are working to clear those issues up so that the sale can be completed.

Preston is also aware that the remaining bridge is a source of concern for the City. “I said to them – We’re metal guys and I don’t want to take on an expense that I don’t have to, but I’m also not going to make you put in a brand new one. We’ll just make sure no one gets hurt. It doesn’t have to be two-lane, one lane is fine.”

“It seems like it just needs a little TLC and that seems like a small price to pay to offset for the possibility of having jobs and more industry coming here. Just patch it and that’s fine,” stated Preston. “With that, I don’t see why it can’t go another decade.” 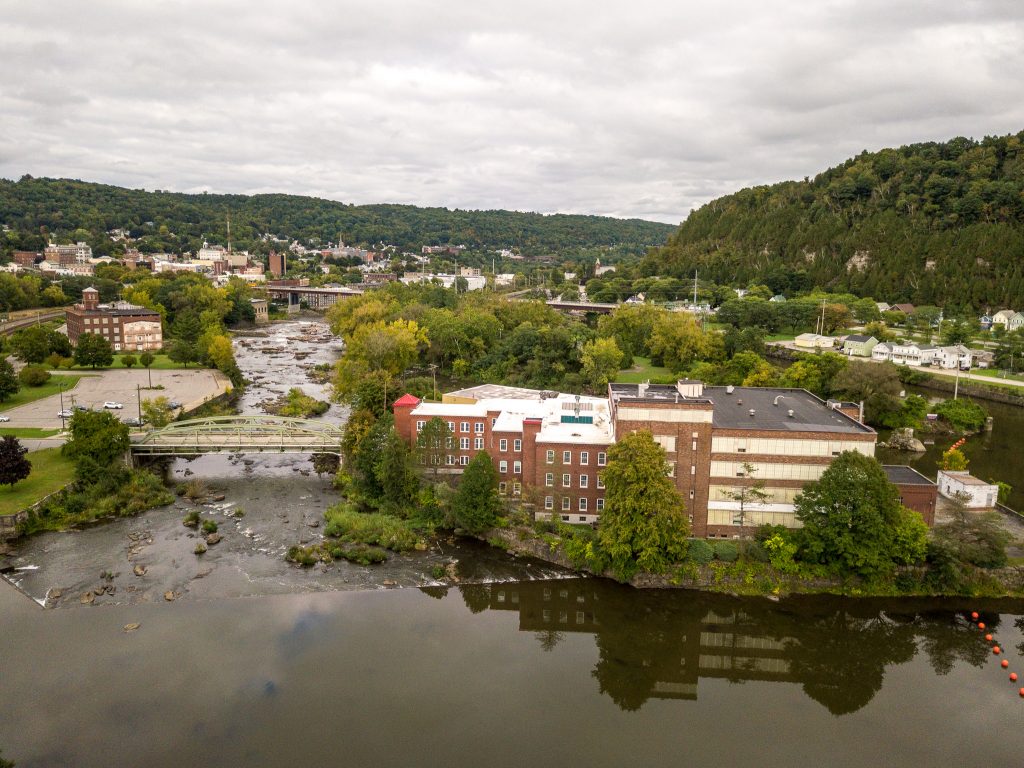 Once the equipment is delivered to the facility, the bridge will see much less use with only small vehicles delivering lightweight parts or small aircraft back and forth.

As far as the number of jobs involved, Preston doesn’t want to overpromise and under deliver. According to Peter Stone owner of PEMS, “I’ve hired three people since I’ve met Daniel. I guess you can’t get caught up in the numbers right away.”

Preston stated “We’re talking to Rensselaer Polytechnic Institute. I’m looking to hire a few of the students from Rensselaer because the real gap that we have right now is for what we call solid works engineers or draftsmen…specialized draftsmen. The engineering is taken care of, the machinery is taken care of, but we need that interface and that’s the CAD engineers.”

He said that they weren’t able to attract any people from Long Island to come up here, but they were blown away by the programs and synergy with Rensselaer with some of the things that they are going to make here in Little Falls.

“It also didn’t hurt that the department head at Rensselaer was the Ph.D. student of a cofounder in the Luminati team for Facebook. They were coinventors on a key technology Luminati was founded on called synthetic jets. We were kind of linked and I knew his work very well,” stated Preston.

Sooner or later, the company will have to build what is called a spin rig, which is a wind tunnel for helicopter blades. Rensselaer got excited about the project and asked if it could be built in Troy. “We told them – why not build it here and you guys can run the facility?” stated Preston.

After those initial hires, it will depend on how fast production grows as to how many jobs the company will be able to create here. “For the composites work, I pretty much have to train two people as soon as the machines are set up,” he said.

Preston thinks that total job numbers initially will be in the five-seven range, but over a five year period “I think it could be significant. Each company of mine kind of follows the same formula. You don’t entirely know the perfect path it’s going to take, but you try to set things up so that you have a number of paths to success.”

“What’s worked really well for me in the past on the aerospace side is that we take high-visibility projects, like the solar electric flyer. That’s a very high visibility project. It would be foolish to make a business bank on that one product and that you would get enough market share to be successful.”

“You push the state of the art for all the sub-components, get a lot of visibility from that and then either competitors or other companies see those components, they could use them and we say that we play well with others and we’d be glad to make all your parts,” said Preston.

Preston feels that that approach creates the most number of jobs and stability. “It’s about making widgets…period,” he said. 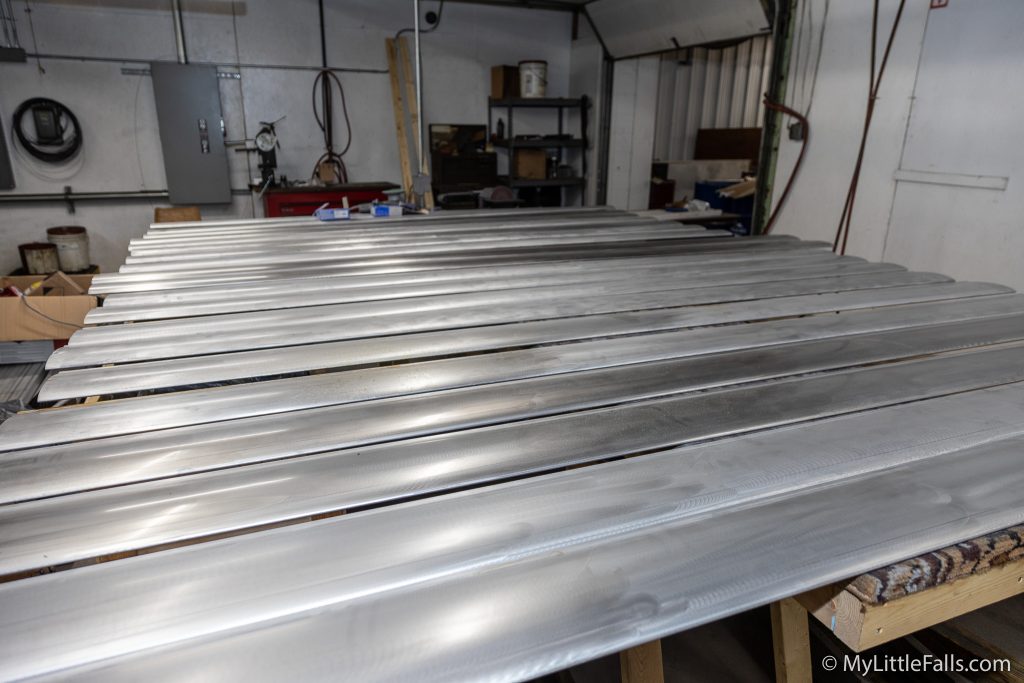 Photo by Dave Warner – Some of the new blades that are coming off the production line at PEMS Tool & Machine Inc for Luminati VTOL.

Stone said that Preston left, went back to his life, but then a week later “He called and said the tooling is on its way, it will be there Wednesday. I was like wow because I’ve heard a lot of things throughout my life.”

After PEMS got all of the tooling set up, the individuals who used to have the company came up and trained people at PEMS on how to operate the equipment. “Now, these helicopter blades that we’re making are being put onto the Gyrodyne. These blades are different than the old blades that were on it. We’re doing some work with the (new) tip brakes that are on them,” stated Stone. “So far, everything is moving forward.”

Stone thinks that all of the stuff that Preston is bringing into the business is “Neat stuff,” and it’s brought him back into the machine shop from his construction work. “I’m having fun with it,” said Stone.

“Peter has produced a lot of parts for helicopters (in the past). He does ultra-high precision parts for defense contractors. There’s so much of a value-add to the local economy and to his business if we start producing products or assemblies instead of discrete parts. It changes the whole game,” said Preston. 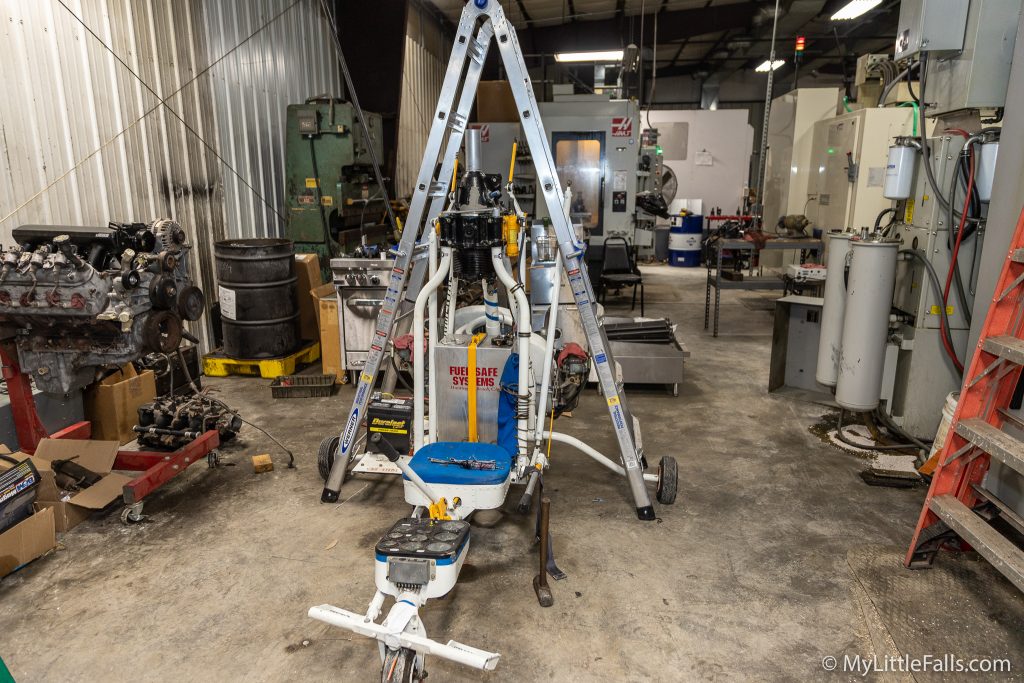 Photo by Dave Warner – A Gyrodyne helicopter sites partially disassembled at PEMS Tool & Machine Inc., while the parts are being tested.

Preston said that the experience in Little Falls has been extremely positive. “I’ve started small here and I’ve always run the ideas past City Hall and everyone has been nothing but encouraging and helpful and I think everyone’s head is in the right place here. I’m very very impressed with the town and I’m trying to be a positive member of the community,” said Preston.

Since Preston is purchasing the Redco facility, what is going to happen to the Vincent Manufacturing building? “The downtown square (Canal Place) is such a beautiful developing retail area I may want to put in some type of an atelier. During a non-compete period following the sale of a defense company I founded Cacao Prieto (an artisan chocolate factory in Brooklyn) & Widow Jane (a bourbon distillery). Next door to those companies I operated an experimental space called the Apothecary to formulate and test products, mostly soaps, and natural cosmetics. I am flirting with the idea of setting up a soap factory and retail store in the Vincent building,” stated Preston.