Photo submitted – Ashley Miller and some of her supporters during her fall walk at the Herkimer Home.

Ashley Miller is a Little Falls native who graduated in 2013 from Little Falls High School, and if you talk with her for just a few minutes, you quickly find out she is a woman on a mission.

In November, she held a Walk & Talk with Me event about eating disorders at the General Herkimer Home.

Miller is currently a dietetics and nutrition major at Mohawk Valley Community College, and she works in Utica at the Center for Family Life and Recovery. The facility provides a range of prevention activities.

Her personal focus is on eating disorders because of her experience in 2019. “I decided to take charge of my own health, so I searched the internet on how to lose weight,” she stated.

Miller said she was successful and lost 115 pounds. However, “this caused me to develop an eating disorder because I was severely under-eating and the body does not like to be hungry,” said Miller.

“When the diet ends is when the struggle begins. No one wants to gain back the weight that they struggled so hard to lose, and it developed into an eating disorder,” she said. 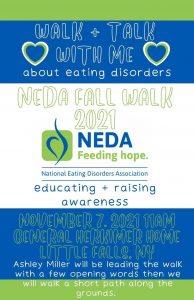 Now she is focused on letting people know about eating disorders by having public events to bring attention to the problem. Her most recent one was at the Herkimer Home where her family, friends and co-workers showed up to support her.

“I have a really small social media circle so it was nice that those people showed up, even though we couldn’t have an inside walk this year,” she stated.

With so many things going on in the world, it seems like eating disorders would be way down the list when it comes to attention, but Miller says, “Eating disorders are extremely stigmatized and glamorized and I don’t think that people know the depths to which they go.”

“You can ask people what they envision when they hear the term ‘eating disorder’ and they’re going to think of the skinny model who has the almond for lunch. That’s not an accurate portrayal. Eating disorders come in so many different forms,” stated Miller.

She said that there are a lot of misconceptions about what it is. “My goal is for people not to just look for the telltale signs. There are so many people that struggle with this and when you bring it into the light, it helps.”

Miller said when you look at the statistics, some of the numbers are staggering. “Eating disorders are the second most deadly mental health disorder after opioid addiction.”

“You would think it might be depression or something like that, but no, it’s eating disorders. That’s a humbling statistic to read and it makes me very fortunate that I was able to get through it,” she said.

Miller is hoping to bring attention to the problem by holding another walk this year, hopefully, one where Covid doesn’t limit participation. “I might even look for a better location where I can get more people involved. I know this will strike a chord with more people than just me.”

“Every time I talk about this stuff I think people feel more comfortable talking to me about what they’ve gone through or what a family member has. There’s power in education and I’d love to keep educating people. Eventually, I would like to become an eating disorder peer advocate,” she stated.

Miller said that typically, there is no one in the trenches with you when you are fighting this. “Someone who could go grocery shopping with you, or someone you can text when you’re in a crisis. I would love to be part of that support network for people in the future. People think this is just a girl’s issue, but it’s really not.”

The Center for Family Life and Recovery supports individuals struggling with addiction, mental health, and behavioral issues by inspiring hope, providing help, promoting wellness, and transforming lives. You can find out more by visiting www.whenthereshelpthereshope.com