Be ready to head ‘Into the Woods’ Friday and Saturday night

The hit Broadway musical “Into the Woods” will be onstage at the Little Falls High School this Friday and Saturday nights at 7 pm. What happens after Happily Ever After, after all? 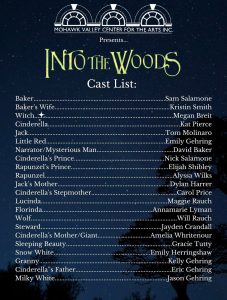 Into the Woods is a story that follows a Baker and his wife, who wish to have a child; Cinderella, who wishes to attend the King’s Festival; and Jack, who wishes his cow would give milk. When the Baker and his wife learn that they cannot have a child because of a Witch’s curse, the two set off on a journey to break the curse. Everyone’s wish is granted, but the consequences of their actions return to haunt them later with disastrous results.

Eddie Rose is directing the musical, and he said, “The Mohawk Valley Center for the Arts usually does a show each summer, but Covid put a little damper on that, so there hasn’t been a show since the summer of 2019.”

Auditions were held the week of Memorial Day, and they started rehearsing the second week of June.

Rose had previously done two shows with the arts center, both directed by Jean Smith. “This summer, when they decided they wanted to bring it back, Jean wasn’t available, so I was upstate anyway for a judicial internship, and so I volunteered to direct it.”

He said that he had previously directed two shows in college, so that role is not new to him.

“This musical is a play off a bunch of fairytales, and it follows a baker and his wife who have a curse on their house that stops them from having a child,” he said.

The quest for the couple is to find a bunch of objects that relate to the different fairytales. “Act One is very whimsical and Act Two is a dark comedy about the consequences surrounding the couple’s wish being granted.”

Rose said that they had open auditions for anyone in the Valley ages 14 and up, and everyone is local, with the youngest being 15.

“We have people from Dolgeville, Herkimer, Mohawk, Little Falls, and in between,” Rose stated.

Tickets will be sold at the door and can also be purchased from any cast member. Prices are $10 for adults, $9 for students, and $5 for children ten and under.

Sam Salamone, who plays the role of The Baker in the production, has done podcast interviews with some of the cast. Here are the links for those interviews: