‘Can You See Music’ opening at MVCA

I’ve no doubt that had my preteen self lived in Little Falls, NY, back in 97’and came across the work of artist John van Orsouw, it would have fashioned itself the forerunner in my mind’s category of “cool.” That was the year MVCA hosted Orsouw’s first big show, and that was just the beginning of his sojourn into the art world.

On August 13, MVCA is once again honored to present the work of the self-taught painter and native of Southern Netherlands. Less than a fraction of Orsouw’s wall-to-wall, current work will fill the gallery, transforming the MVCA into a night out on the town and transporting attendees to an older era, one reminiscent of 125th St. in NY or the French Quarter of the “Big Easy,” in New Orleans, LA. The show titled “Can you see the music?”, is a collection of wildly electrifying paintings and sculptures that will show you everything you or your Gen-X kids missed out on. If Orsouw’s art wasn’t such a party, it might run the risk of invoking that old-time film nostalgia. 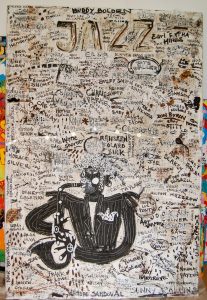 Like any good artist, Orsouw draws his influences from the world around him and his own life experiences rich in culture, scattered with colorful characters, creatures, objects, and places. His hometown is ‘s-Hertogenbosch in Holland, but Orsouw has lived in both NYC and New Orleans. He offered up, “I don’t have the patience for oils,” reasoning his use of acrylics only. Orsouw’s work is uninhibited and often a tribute to the Jazz Age, a reflection of his love of the music that came out of that era. Whether it’s a lyric, a recipe, a tune, or a band, this work is for the living, those that choose to celebrate life and capture that roaring feeling of an endless night. If you were one of many a kid who had to hide your 1960’s B.B. King’s “Live & Well” or Rolling Stones’s “Let It Bleed” record from your parents, those folks convinced rock & roll was the devil’s music, Orsouw’s outright fun, and most unflinching art could very well activate that sneaky thrill of youth.

In the early eighties, Orsouw took over an existing bar restaurant in Canajoharie, NY, called Ernie’s. After meeting John, I wasn’t the least bit surprised to learn from some old-time locals that Ernie’s was a melting pot of people, a “go-to” place for all kinds of folks. Orsouw confessed, “I loved to cook, and at the time, I couldn’t afford to buy nice art to put on the walls. So I painted a nice scene or two to hang up, to give the place some color.” Setting the trajectory for days and nights spent in his studio, month after month of loading his van flush with paintings, John would hit the road for show after show, staking his claim in the art world here in America as well as in Europe. Orsouw uses cardboard, old wood, tin, and just about anything he can get his hands on that he deems fit for a canvas.

Orsouw has been creating and selling his art for 25 years. His more recent exhibitions are the Outsider Art Fair in New York and Paris, the 6th Annual Outsider Art Exhibition at Galerie Belage in West Hampton Beach, New York, Musee de la Creation France, and van der Plas Gallery in New York City. Hardworking and humble, Orsouw is more comfortable referring to himself as a doodler than an artist. To me, Orsouw is the purest kind of artist, one of those rare art world gems. Unapologetic, spontaneous, imaginative, and in that twinkle-eyed child-like way, Orsouw is still discovering, still marveling at the world.

In Nov. 2019, he was the featured artist in Outside Art Magazine. Outsider Art, a term created in the 40s, coined in the 70s, but not yet celebrated until the 90s, is used to describe art made by self-taught artists, typically with little to no contact with the conventional art world. Orsouw derives a lot of his inspiration from children’s toys, folk & indigenous art forms, and the European avant-garde movement known as CoBrA (an acronym for Copenhagen, Brussels, and Amsterdam). His art is song and dance, its syncopated rhythms, its history, its story-telling, its poetry, and it’s wildly energetic. Orsouw’s paintings are always ready to sing if your eyes are willing to listen.

Step into a mini-color emporium, both smooth and raucous, mellow and ear-splitting, and let the music take you. The more you look, the louder it gets until the line between the art forms of music and painting are entirely blurred. From a statement in the spring of 97’ entitled “A Considered Response to a Spontaneous Art” by the late local artist Forbes Whiteside and friend of Orsouw, “Ask yourself, after absorbing and processing the visual cues, “What do I make of it?”