Working in the foodservice industry is hard work.  Some days are tough and thankless.

It can also be a fun career because you meet wonderful people, regulars-even fellow workers that over time become lifelong friends. 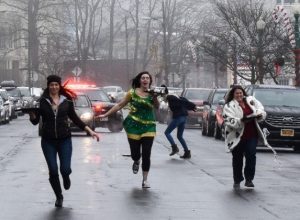 In 1998, I was hired for my very first food service job as a waitress at Friendly’s in the Sangertown Mall- (back when they still had a smoking section).  You know who managed that Friendlys?  Bonita, who now owns and operates The Sandwich Chef.  When I worked at the Overlook Mansion in 2000 as a waitress and bartender, I fondly think of my close friend Michelle Hanson who was the sue chef there and now owns and operates the Ann Street Deli.  20 years later, we’re still close friends.  And the Renaissance…  Sue, Jamie, Chris… It’s literally the reason I got to meet and get to know so many great people in Little Falls.

I haven’t picked up a tray in years but always tip to the point of pain, as I respect the hell out of everyone in the industry.

Since 2011, there’s been a Little Falls tradition where we celebrate the bartenders and servers from the fine bars and restaurants in Little Falls, formerly known as the Bartenders Race.

It’s now rebranded with a more inclusive title: “Tipsy Server Race” and takes place during Christmas in Little Falls.  It will be held this year on Saturday, December 11th at 11 am on Main Street from Mary Street to Second Street.

What is the Tipsy Server Race you ask?   Well, servers and bartenders compete to win a 100 yard(ish) dash down Main Street carrying a tray with a beer bottle and a glass (without spilling anything off the tray).  It’s not as easy as you would think.  In addition to the bragging rights earned by winning, it’s a fun event for many great causes.

Each server or bartender competing, raises money for the charity of their choice, and regardless of the winner, each charity will receive the proceeds.  So, in addition to celebrating our fine food industry folks, there is much good done along the way!

Prizes are awarded for the 1st, 2nd, and 3rd place finishers in the race and prize for the person who raises the most money for the charity of their choice.

Katrina Talbot has been helping to keep this tradition alive for the past few years.  She said, “We are hoping for the biggest turnout we have ever had. It would be so cool to see each business have a representative!”

Any servers or bartenders wishing to compete should contact Katrina Talbot at 315-717-1920 or katdoxtader@gmail.com  so she can get you a pledge form to start raising money for your charity. 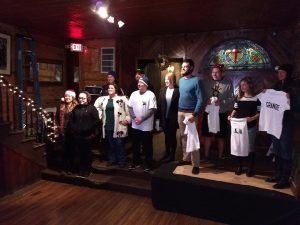 Racers should meet at Ruggerio’s Trattoria at 10:30 on Saturday, December 10th.  The first heat begins at 11 am sharp on Main St. in between Mary St. and 2nd St.   Prizes to follow the race at Ruggiero’s Trattoria.  Racers should bring their pledge form, monies raised, and a tray.  Oh, and feel free to look festive!

So, please sign up.  And if you aren’t a bartender or server, next time you are at your favorite Little Falls establishment, ask who’s racing and if you can donate to the charity they have chosen to raise money for this holiday season.

And as always, and especially during the holiday season, be kind and tip your local servers and bartenders well, its hard work and they deserve it!