Sam Campione has the new water meter ready to go while Josh Lindsay checks the house off their list.

The City of Little Falls water department has begun replacing water meters as part of an upgrade to the more than 20-year old aging water meter reading system. The new meters will provide more accurate, hourly reads to better help detect leaks and excess usage before it becomes a problem.

City Engineer Chester P. Szymanski III stated, “We’re getting a couple of the existing water meters that are failing every week and we needed to come up with a plan for replacement of the meters. Their failing is a generational failing at this point. Everything is coming to the end of its lifespan.”

As the system has aged, the City has tried to keep up by using replacement meters, except that now, the company that manufactures them is going to sunset that model. “We needed a wholesale replacement strategy,” said Szymanski.

Initially, they looked at the three largest manufactures of water meters to see what kind of technology currently exists. “There are still the drive-by systems that are out there, the next step up is cellular systems where every meter talks to existing cell repeaters, and that sends the data back to a collector at City Hall,” he said.

“In going through a six-month process or more of figuring out what would work best for the City, we kind of came to the realization that there are pluses and minus to each of these things,” Szymanski stated.

The big negative on the drive-by systems is the number of people required to do it and the fact that the data is not real-time. “With newer technology, it makes sense to go to a system that is sending you the information instead of having to send people out to get it.”

The cellular option was not that expensive upfront, but after the initial five-year contract, there was no way to predict what cellular rates would be. “There was a little bit of an unknown there and when you’re dealing with municipal finance, an unknown is not the greatest thing to have,” stated Szymanski.

This left the net metering system as the best and most cost-effective choice. “It will be all City-owned infrastructure and the meters will work without any outside contracts.”

Photo by Dave Warner – One of the repeater station antennas for the new water meter system.

The City has already installed the four required repeater stations in order for the meters to work, and they’ve begun installing some of the meters to test out the system. “They have been placed in the City based on a propagation study that the company did for us,” he said.

“There are a couple of great things that come with this system, and there are also things that we can do to expand the system when we’re ready. Right now, the data comes back in 15-minute packets and with that data, you can get super granular to see if there are water leaks in a house,” stated Szymanski.

He said that if they further improve the system, homeowners and businesses would even be able to pay their bill online and to set notifications that would let them know if there was a problem, even while on vacation.

When selling a house, or having different renters move in, the City will be able to read meters remotely, saving time and money. “In this case, we can log in right from City Hall and see the last information and that’s it. Down the line, if we wanted to, where it might make sense, we can actually turn off service. We don’t have that ability right now, but that’s something we’ll look into for the future.”

Two weeks ago, the collector sites were installed around the City. “At the beginning of last week, we started installing meters on kind of a trial basis to see how many we could get done in a day so we could plan the rest of the installation project,” Szymanski said. 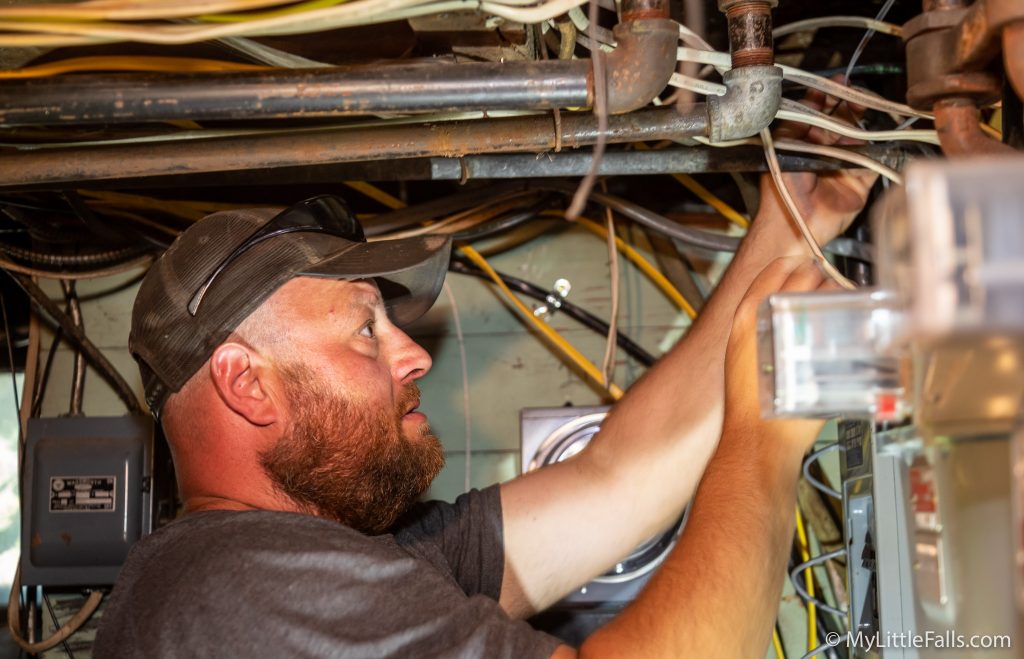 Photo by Dave Warner – Sam Campione finishes up the installation of one of the new water meters on Loomis Street.

The City plans on having 2-3 people working on the installation at a time, approximately three days a week. “This gives us time to deal with other City issues on the other two days with things that come up like water leaks, and service issues.”

Szymanski believes they can install about 15 meters per day. “If we can get that many done in one day, we’re in good shape. That puts us out at about 30 weeks or so to finish the metering project.”

The project is being done in-house in order to save the City money. “We could have contracted out the installation of the new meters, but that would have cost at least another $100-$150,000 dollars to have someone do that for us.”

Szymanski says the water department will need your cooperation in order to gain access to your water meter. If you are not at home when they come to your house, they will leave a door hanger with a number for you to call. If you prefer to schedule an appointment, please call or text 315-868-7789.

If the City has to estimate your bill because they were unable to replace the meter, you will be assessed a $25 fine on each bill until the meter is replaced.

Szymanski said, “It’s a huge step up for us in capability. It’s frankly more accurate metering and that will be a benefit for residents to know if they have any issue within their house that they need to repair, which will save them money in the long run.”

“It really makes our job easier when they get up and operational. It’s going to give us more time with the small crew that we have to take care of other issues in the City,” he stated.