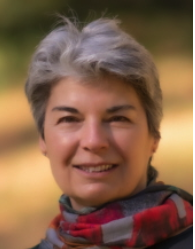 Claudette was raised in upstate New York and, although she graduated high school in Florida, she always identified as being from Little Falls, NY. She lived in many areas of the country but settled in the Pacific Northwest in WA’s Puget Sound region in the 1980s. During that time she lived in Poulsbo, Olympia, Seattle, Bainbridge Island, and Port Townsend.

After getting her Bachelor’s degree, Claudette served in the Army for two years (’76-’78) and used the GI Bill to complete her Masters’s in Human Resources and Organizational Development from the University of San Francisco. She later added a second Masters in Psychology from Antioch University in Seattle. Her career was primarily in Human Relations in state and local government, and she retired in 2017 from Seattle Public Utilities.

After retirement, Claudette trained to become a life coach in The Three Principles community. “The Three Ps” dealing with Mind, Consciousness, and Thought had a huge impact on Claudette and her understanding of people and their lives (including her own). Her desire was to share her understanding with people to enable them to see their own potential and the possibilities we each have in life.

Claudette loved folk music (especially Irish and Scottish), folk dancing, gardening, walking and hiking, and cooking. She journaled extensively, typically writing for over an hour after rising very early each morning – every morning for years. She filled notebooks by the boxes. She enjoyed learning new things. In retirement, she took a woodworking class from The Barn on Bainbridge Island just for the joy of discovering something new and gaining some understanding of how woodworking is done.

Most of all, Claudette loved being with family and friends. Claudette’s generous, kind, compassionate nature and interest in others had a strong impact on many people from the moment they met her. She had a warm personality that radiated love and concern.

Claudette treasured her close relationship with her only sibling, JoAnn Harrington of Cary, NC, and with JoAnn’s beloved daughters (Bridgette and Jill) and their families. In 2015, Claudette reconnected with Allan J. Jones whom she’d long known as a friend. A lasting, deep love developed between them, and they married in June 2020 at their home in Port Townsend.

She was taken from us too quickly and too soon. She will be dearly missed.

A celebration of life will be held in the fall of 2021 at a time and place to be determined.

Photos of Claudette can be found here.

Please share memories and photos of your own on this site.