Photo by Deborah Kaufman – The City Clerk reads the oath of office for the swearing-in ceremony.

The City of Little Falls Common Council held its first regular session of the new year on Tuesday night. The first order of business was the swearing-in of the new City Treasurer, Anthony T. Federico, and then the swearing-in for the remainder of the council and mayor.

There were eleven resolutions on the agenda. Resolution #1 was for a new Common Council President and Justin Welyczko was nominated and voted on in a unanimous vote.

Resolution #3 was for the payment schedule, which passed unanimously.

Resolution #4 was for a Special Prosecutor for traffic violations that occur within the City. Jennifer Chrisman was appointed to serve for one year with a fixed salary of $4,000, expiring December 331, 2022. The resolution passed unanimously.

Resolution #5 designated the Holy Family Parish Gymnasium on John Street as the fixed polling place for Election Districts in the City of Little Falls. The resolution passed unanimously.

Resolution #6 appointed Larry Ortlieb as the Dog Control Officer for one year for compensation for 2022 of $3,000. The resolution passed unanimously.

Resolution #7 was authorization for the Mayor and City Clerk to draw warrants on the City Treasurer for bonds and notes, as and when they become due to payable for the year 2022. The resolution passed unanimously.

Resolution #8 was for the re-appointment of Patty Sklarz to the position of Deputy Registrar of Vital Statistics for a four-year period expiring December 31, 2025. The resolution passed unanimously.

Resolution #9 was the appointment of Jennifer L. Chrisman, Esq, as City Attorney at a rate of $38,000 per year, for a term of three years, expiring on December 31, 2024. The resolution passed unanimously.

Resolution #10 was the City Engineer Contract between the City of Little Falls and Chester P. Szymanski, III, P.E. The term was for three years at a rate of $93,300.00 per year with an annual raise of 1.5 percent starting on January 1, 2023. The resolution passed unanimously.

Mayor Mark Blask stated, “If you’ll recall, we did something similar down on West Main when we had the Valentine’s Day explosion. Those were two separate lots. We ended up taking one in similar circumstances. There was no money to be had. We came in, we cleaned it up, and ended up taking that lot. We didn’t end up taking the other just because circumstances were different.”

Blask said the City is still working with the attorney out of Syracuse that is representing the property owner on the second lot. “We did attach a lien,” he stated.

On the other three lots of Furnace Street, the City is still working with the owners and insurance companies to recover the remaining portion of the demolition and cleanup costs.

In the Mayor’s final comments, he once again welcomed Anthony T. Federico as City Treasurer and stated that he and everyone else would provide him with the support he needed to be successful.

Blask also brought up the Downtown Revitalization Grant award to the City, which had happened after the last common council meeting. “We’ll keep everybody apprised as to how that’s going. We’re thinking spring, early summer, as far as coming up with a list of projects. There’s a lot of work to be done there,” he stated. 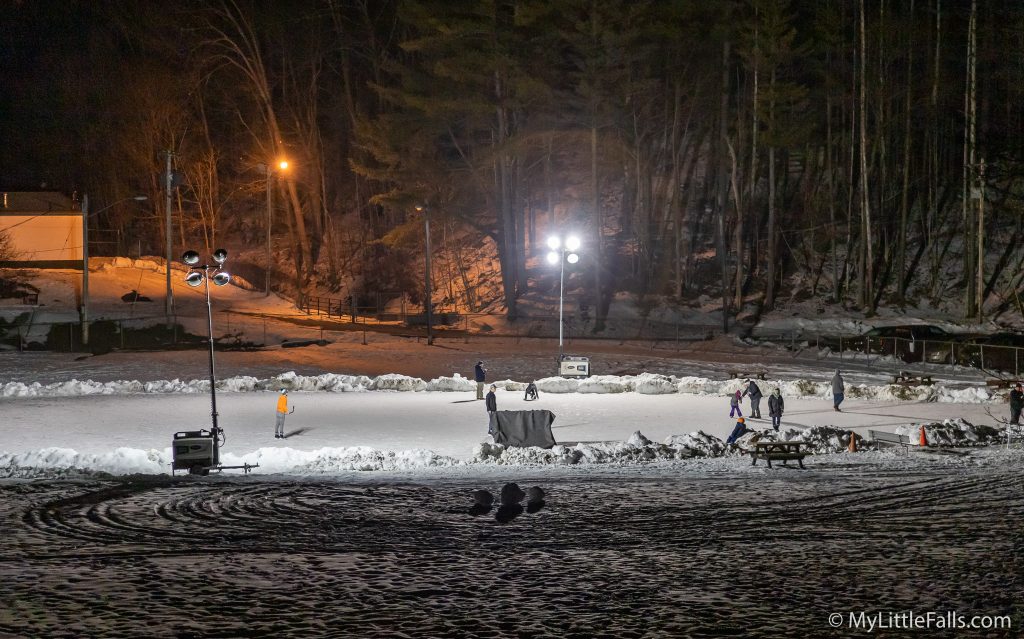 He also talked about the Monroe Street Skating Rink, hoping that the weather would cooperate so that it could open. “We got the ice skates in last week through grants, the lights, and Apple Music is coming down to set up the sound system, which was through a grant as well. We had a lot of helpers on this project.”

“If it stays cold, it’s going to be a great winter up there,” he said.