Construction equipment is lined up after clearing an area where construction trailers and storage containers will be located just south of the Middle/High School building.

Construction has begun on the Little Falls City School District’s capital project, with the clearing of land just south of the Middle/High School complex to make way for construction trailers and storage containers.

The capital project has an emphasis on STEAM education, which will include a new two-story addition that will be built at Benton Hall Academy, along with security enhancements at the middle and high school, a STEAM shop, art labs, and more.

According to Ashraf Allam, Director of Business Operations/Technology, “The ground that they’re scrapping up there next to the buses, is the set down area. They’ll put their trailers and some of our storage containers there. Right now we’re in the process of running electrical and Internet service to that set down yard.”

Allam said that April 1st is when you’ll start seeing activity inside the buildings. “The high school is where they’ll start first, followed by the middle school. Teachers have been great about vacating the rooms that are being impacted by the work and a lot of them elected to do it over the February break, so things are moving faster than we anticipated.”

Most of the work right now is contractors coming in and taking measurements and getting specifications for the work that will follow.

“The first thing they have to do is segregate any active instructional space from any construction space because you can’t co-mingle construction workers and students, so the first thing you’ll see is the building of walls halfway down halls,” he said.

Once they have that complete isolation that is required, they start taking out an outside wall, which will become common use space. “That’s the first visible thing you’ll see from the outside,” Allam stated. 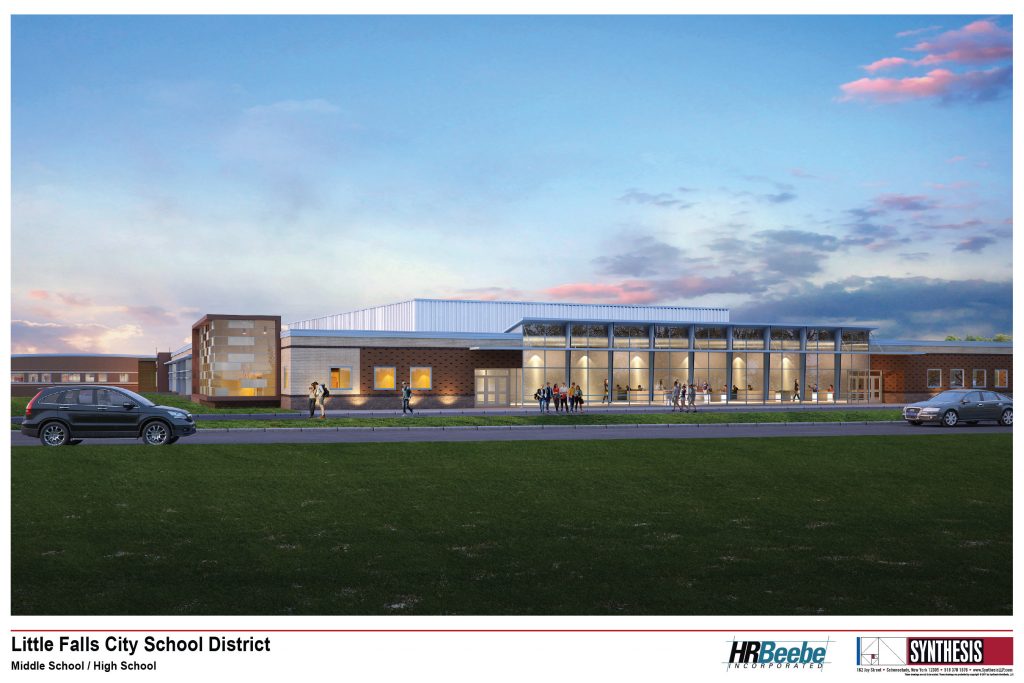 At the middle school, they’ll be starting work on May 1st. “It’s all about conforming the rooms for the STEAM approach philosophy. The other part that is important are the entrances to both the middle and high school. The top three priorities were STEAM, infrastructure, and security,” said Dr. Keith Levatino, District Superintendent. “You will not have access to the school except through one of the offices.”

“Different layers and levels of security,” he said. “The concept is to just have a single point of entry. That’s what we want.”

Inside, the classroom spaces are going to be more interconnected. “Right now everything is a discreet unit and you have an entry door and the teacher walks in and that’s their domain. We’re linking spaces that make sense conceptually. Art and business, for instance, are in close proximity to each other and have connecting spaces,” said Allam.

The idea is to foster collaboration between the groups and allow them to comingle to come up with solutions. “You can have a student flow without having everyone walk out and then walk back in again,” Allam stated.

If it sounds strange to have art and business working together, maybe not. Allam said, “Branding, sales, logos, marketing, there are all sorts of ways where they are already trying to work together now but they are still physically separated in traditional classrooms.”

Levatino stated, “You go from a business class learning how to build a business then to the next room to build the product, brainstorming and creating the product. That’s the wave of the future. That’s what businesses and companies are looking for. Not just the background knowledge, which is key, but the practical knowledge to build it.”

He says that they’ve seen how this works in other schools where they have implemented these kinds of interactions. “We already have the program, Engineering by Design, but we didn’t have the spaces. We have learned that you develop the curriculum before you pour the cement, which we’ve done.”

District officials have also visited locations like Union College to make sure that their curriculum lines up with what they are looking for. 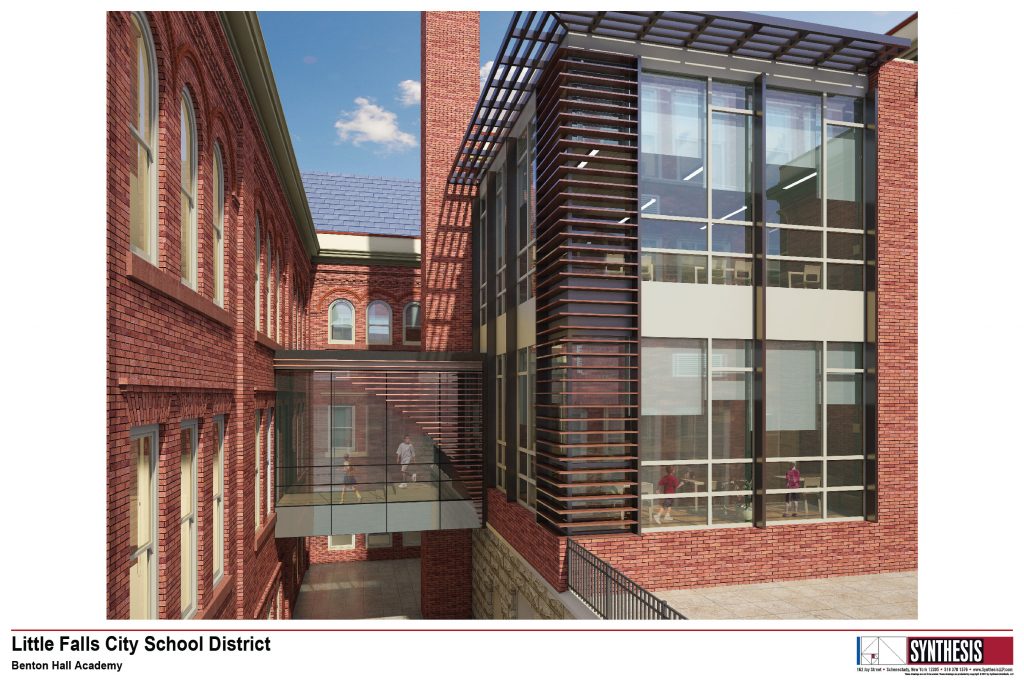 “I’ve seen the ‘Maker Space’ as we’re calling it in action over at Burnt Hills. A key component was Internet availability and electric sockets because we want the kids to go to these spaces together or in groups so that they can work together on what they learned in the art or business classes and work on their own. It teaches them to build collaborative relationships because they need to do that in the workforce,” said Levatino.

“It’s not just instruction, practicum, and hands-on experience, it’s independence and collaboration with themselves working together in this space that’s architecturally enticing,” he said.

From the inception, up until this point, there haven’t been any major changes to the STEAM space designs other than qualitative changes. “We started off with a project where when we got the first run on costs we ended up around $44 million and our bonding limit was $29. So we had to make changes. The neo-industrial look is fine, but it costs a lot more than a real ceiling,” said Allam.

“We went from what looked pretty and gave you the sense of looking modern to spaces that actually did what we needed and were in our budget,” he stated.

Allam said that the spaces they are starting to work on in March and April will be finished by the time students return to school in the fall according to the current time-line. “At the heart of this, it was an infrastructure project and about $12 million of it is still infrastructure. Our heating and cooling units are ancient, so those really have to be replaced,” stated Allam. 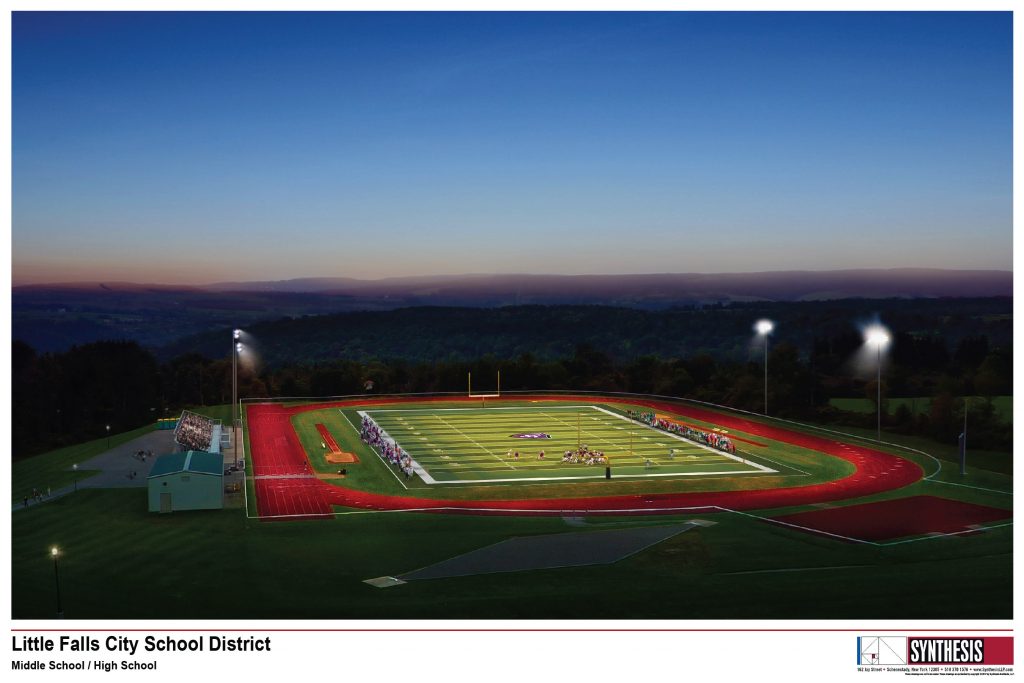 Levatino said, “Another thing community members might like to hear is that the lights should be up and running for football in the evenings this September. People wanted lights, so they’re coming. We were conservative there…we didn’t go for the turf, but maybe next time.”

The project consists of three phases, with completion of Phase I just before school starts back in the fall, and Phase II in the spring of 2021. Phase III will finish sometime in the fall of 2021.