Creative Designs by Tiffany has new location in Dolgeville

Creative Designs by Tiffany has relocated to a new location in Dolgeville.

Creative Designs by Tiffany has moved into a new location in Dolgeville, now located at 78 S Main Street.

Tiffany Rutkowski, owner of the store said, “We were located at 51 North Main Street in Dolgeville and it was the typical storefront with a window. It had been a couple of different stores in the past.”

She said that through circumstances beyond her control, she ended up not being able to stay there, so she had to decide if she wanted to continue the flower shop, or did she want to quit and do something ‘normal’ again.

“These people at Dunkin Donuts are getting $16 an hour just to make coffee and I thought, maybe I’ll just do that.”

She told her husband that it felt like a little bit of a mid-life crisis because of all the things you have to think of being a business owner.

“When you just make coffee and go home at 5 pm, you don’t have to worry about any of that. It was a very big temptation,” she stated. 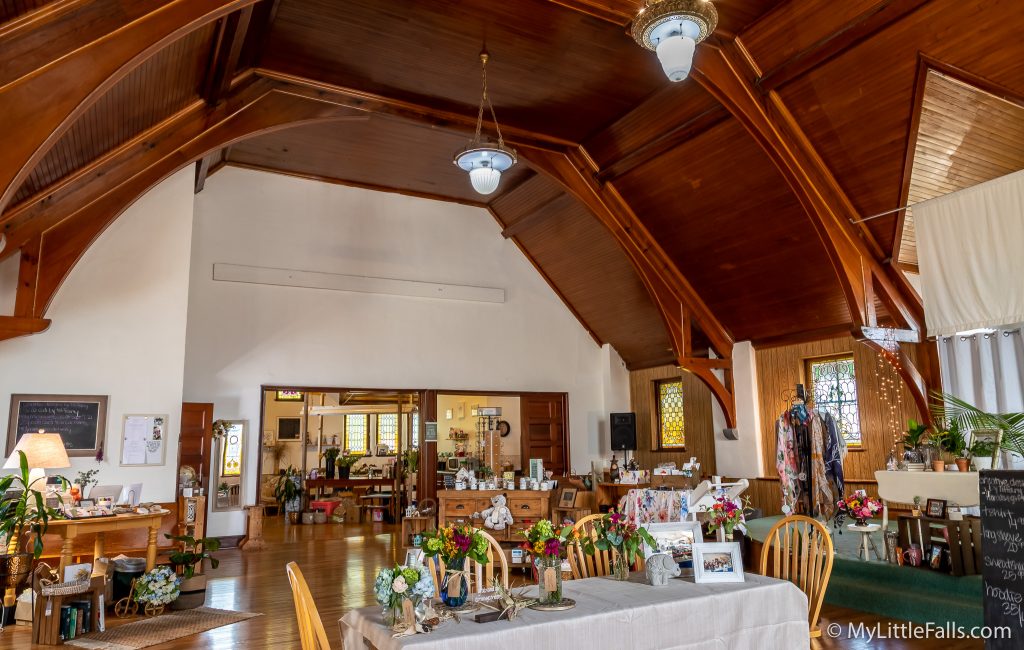 Things moved very quickly for her though as a core group of her friends was giving her advice on what to do. She said that it worked out that she wanted to keep the store going.

“I had taken out a small loan to get the store going in the beginning, but that loan is almost paid off. So I decided I wanted to keep the business going until that loan was paid off.”

Rutkowski felt that with the COVID restrictions mostly lifted, that foot traffic to her shop was really important. Bringing it up to her garage and just doing deliveries would probably cause her to take significantly longer to pay off that loan, so she started looking for a new location.

“We looked at every single spot available in Dolgeville but it’s a small town, and there were only four spots available.”

She said the first spot was an old barbershop and there was an option to buy the entire building. It was a good location but lacked enough parking. “For my businesses, people would have had to park across the street and there was no handicap parking. For deliveries, there was no way for them to do that easily.”

Rutkowski said she also had to consider the idea of staying where she was and hoping that things would work out. There was also an opportunity to buy out another business and have their storefront, plus her flower shop. “That worked out to not be an option.”

The fourth option is what worked for her. “This wonderful woman named Barb walked in to talk with me and she said – I heard you are looking for a new spot. It was an old church at 78 North Main Street, a beautiful location. I was a little bit hesitant because it didn’t look like a storefront and all the others did. You had to think a lot about how this could work, and that’s where all the friends came to the rescue.”

She said that a lot of people are locked into what a storefront should look like and a church, doesn’t fit that model. “A lot of people who were from out of the area could see it and said do it. People here said you want that window so people can see in,” she said. “Even I got stuck on that idea.”

In the end, with a lot of thinking and input from her friends, she decided to take the chance. “It’s good to take advice from people who have been there before,” she stated. 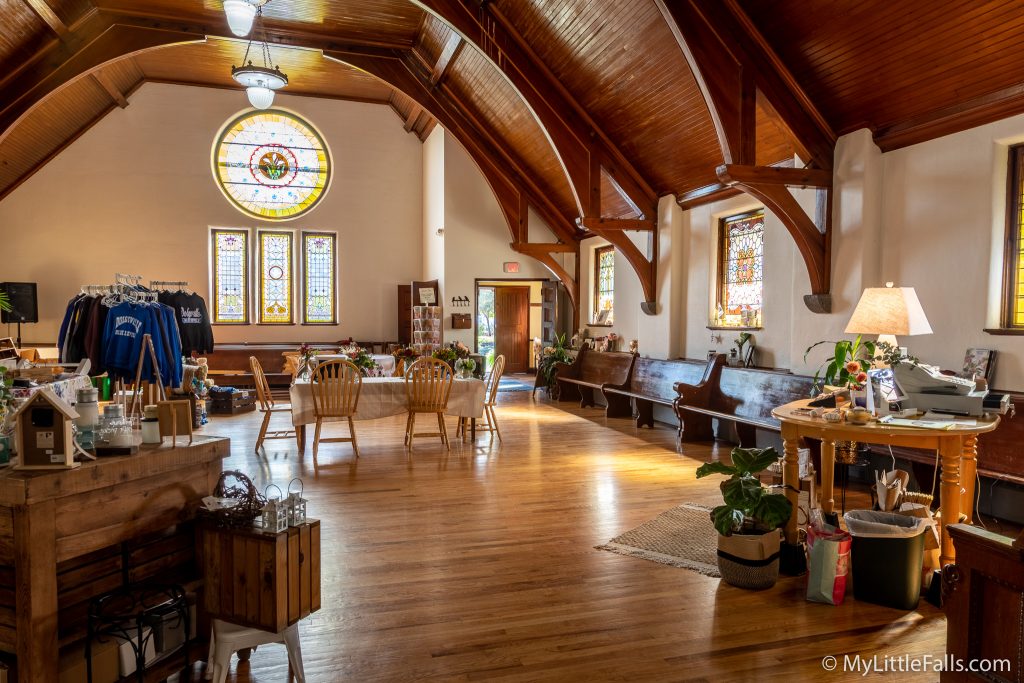 “It’s a beautiful structure and once we started moving in, it felt right. It ended up working out.”

She says that it’s a lot bigger than her previous store. “I really like it on the overcast dreary days because you have these little Christmas tree lights in there and it looks so homey.”

Rutkowski said that having the extra space is going to allow her to expand her gift offerings and that on the flower side, she might be able to get into silk flowers a bit more, as well as outdoor plants when the weather permits.

“We’re officially telling people now that we are also going to have a tea room in November, which will open on the 9th. So that will be a fun thing as well. It screams for something elegant where you can just sit and enjoy your time in there,” she stated.

“Right now it will be self-service until we can get all the permits that are required. Maybe if it takes off, we’ll add even more to it. We want to be able to grow the business and see where it goes.”

Rutkowski says that it’s just a really comforting space, and she’s even thinking about having a piano in one of the corners. “It’s not going to be like a concert location, it will just be off to the side. It will be a nice little place where you can just go in and play for a couple of hours if you’d like to.” 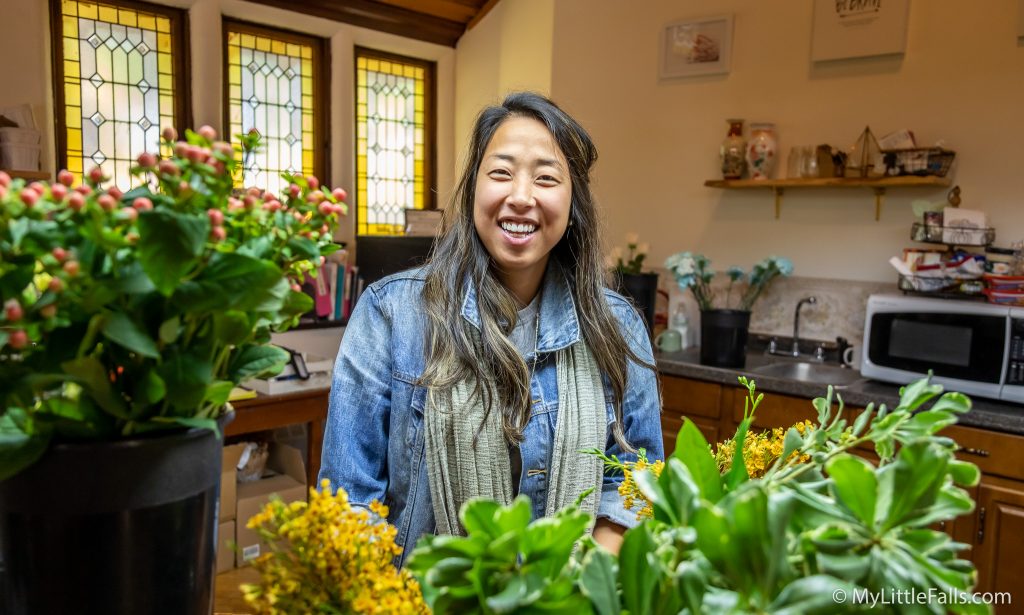 “We’re just going to do it and I hope everyone comes up and visits. Sometimes, you feel like you just can’t fail. In a small town, it’s amazing to hear how many people didn’t want this business to fail and every idea they had they’d bring to me. It was a community event to figure out where Tiffany is going to go,” she said.

Rutkowski said they plan on a big grand re-opening ceremony the day after Thanksgiving. “We’ll have Santa, and a huge Christmas tree, but don’t wait until then to stop in.”

You can find out more by visiting https://www.facebook.com/c.d.bytiffany