Cyclist rides through Little Falls on way around the country

So, what do you do when you pull up to your commercial property and find someone camped out on it? Well, Mark Regan went ahead and bought cyclist Tom Helbig a beer and then asked him what his story was. Turns out, it was a pretty good one.

Helbig is busy cycling around the perimeter of the country and is on his last leg going from the most northwestern corner of the United States to the most northeastern corner, which will complete his trip. He calls it, the Tomfoolery Good Vibes Tour.

He said that he grew up riding his bike as a kid and that it was always just freedom for him. “I lived out in the country and could ride to the neighbor’s house, ride around in the woods and backyard, so I just loved to ride a bike. It just makes me smile.”

In his adult life, he discovered that riding a bike, allowed him to travel relatively inexpensively and to explore places. “It’s a fun way to experience the country. I wouldn’t meet people if I was driving through in a car like I do on a bike.”

Helbig is from Ohio, so to start the trip, he flew into Seattle in July and started biking from Neah Bay Washington on his trip east. He stated, “I have a lifestyle based around adventure and this is leg number four of a quest to cycle the perimeter of the U.S.”

In 2016 he cycled from San Diego to Key West Florida, then in 2018 he did Key West to Canada up the eastern seaboard, and in 2019 did the Pacific coast from Canada to Mexico.

Stopping in Little Falls, meant that he had about 450 miles left to complete the entire loop around America.

The trip is helping to promote his small outdoor adventure business called Tomfoolery Outdoors, so he documents his journey and blogs about it, and shares the stories of people, places, and organizations.

“The business is a brand for my identity. I do events, paddle boarding, fly fishing, bike trips, mostly in Ohio, North Carolina, and Virginia,” he stated. “I live my brand, and my brand is my life.”

Helbig said, “I find people that I call ‘good vibes leaders’ that are making the world a happier, more accepting, and loving place.”

He stated that one of the things he has found throughout the entire trip is that people are basically good, accepting, and welcoming. “I think people just want to be welcoming and friendly. So, I see the best in humanity, which isn’t a surprise for me, because I’m in it.”

Helbig feels that the news would have you think otherwise and that it wouldn’t be the case. “I think the worst in humanity is not as dominant as the news tells us.”

He was following the Erie Canal Trail from Buffalo to Albany, which is how he landed in Little Falls. “I gravitate to the little towns along the way. They’re charming and amazing. A friend of a friend told me about a local climbing guy named Carlton Maricle that I was here and I wanted to reach out to him.”

As an outdoor adventure enthusiast, he felt that he had to see Moss Island, and that’s why he camped out in Little Falls. “Because of COVID, I’m now thinking about smaller, boutique-style excursions that I can offer, and now that I’ve been on the Eric Canal Trail, I’m in love with the idea of hosting a multi-sport week on the Canal.”

After his experience in Little Falls, he is now considering it a scouting mission, embedded into his overall trip and hopes that the City can become one of his destinations for those boutique-style excursions.

“Little Falls is charming, and I love the river, so a town that has moving water, always catches my attention. The fact that there’s a brewery, a coffee shop, and just that whole scene down here intrigues me. And on top of that, it’s a trail town,” he stated. 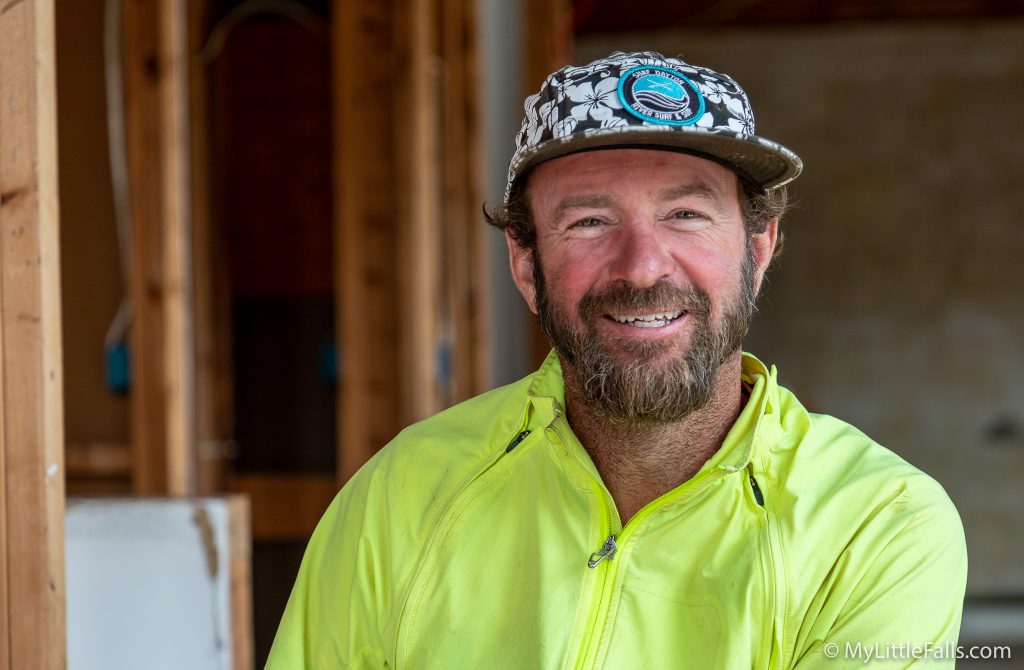 Photo by Dave Warner – Tom Helbig sits in the old hydro station and tells his story about riding around the entire United States.