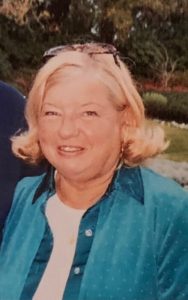 Dawn Ann Strait, age 72, formerly of Newark, New York, went to be with the Lord on Thursday morning, February 11, 2021, in the Lake Norman Regional Medical Center, Mooresville, North Carolina. She was surrounded by many family members and Fr. Mark Lawlor of the St. Therese Catholic Church at the moment of her passing.

Dawn Ann (Pruner) Strait was born on November 7, 1948, in Newark, New York to Laverne and Thelma Pruner. She was a 1967 graduate of Newark High School.

On May 9th, 1970, Dawn was united in marriage to John Strait, of Dolgeville, New York at the St. Michael’s Catholic Church in Newark. The couple had recently celebrated their 50th wedding anniversary.

She worked at the Newark Central School District for 18 years as the head of the paraprofessional staff and touched many ESL students’ lives with her passionate heart. Dawn was very involved in the Newark community for many years.

Dawn was a longtime member of St. Michael’s Parish in Newark, New York. She also served as president of the Newark chamber of commerce and was a member of committees with the Newark-Wayne Community Hospital.

To Dawn, family and friends were everything. Her greatest passion was raising her children and watching her family grow alongside her husband, John. Dawn was a treasured friend to many. Her welcoming and warm presence will be greatly missed. She was also a proud Catholic and often would pray to Saints for others to sell a house, find a lost piece of jewelry, pray for the sick, and protect her family. She was a very loving and involved mother, a devoted wife, and loved her social life.

Dawn and John moved to Mooresville, North Carolina in May of 2015 to be closer to their youngest grandchildren after supporting and being involved with their older grandchildren in Webster, NY.

A service will be held at St. Joseph’s Cemetery in the spring at a time to be announced. The family is being cared for by Miller-Plonka Funeral Home, 30 Wolf Street, Dolgeville, New York 13329.

To leave a message of sympathy for the Strait Family, please visit www.millerplonkafuneralhome.com and sign the tribute wall.