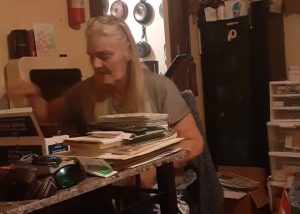 Delisa was born in Little Falls on November 20, 1965, the daughter of the late Laverne and Leon Seymour. She was the oldest of five children. Delisa graduated high school in Michigan City, Indiana. She moved back to New York to be closer to her family. She was at one time united in marriage with Erik Carlsen. She was married to David S. Anderson, who passed away on June 8, 2019, and the couple resided in Herkimer. Delisa was employed with the Little Falls YMCA as a cleaner. In her spare time, Delisa enjoyed doing puzzles, shopping, and spending time with her sister, Catherine.

She is survived by her children, Carolejilene Goodwin and husband Casey Goodwin of Rochester, NH, and Erik Carlsen II and wife Bryana Carlsen of Milton Mills, NH; two grandchildren, William Hussey of Farmington, NH, and Alissa Goodwin of Rochester, NH. Brothers Jason Seymour of Mohawk and Leland Seymour of Little falls; sisters Catherine Seymour of Herkimer and Kellie View of Mohawk. Several nieces, nephews, aunts, and uncles. She is predeceased by her first husband, Erik Carlsen of Rochester, NH, in 2021 and her second husband, David Anderson of Herkimer, in 2019.

A Celebration of Life will be held at a later time convenient to the family. Arrangements are under the direction and care of Mohawk Valley Funerals and Cremations, 7507 State Route 5, Little Falls (corner of Bidleman Road), Little Falls, 315-508-5131. Please visit www.mohawkvalelyfunerals.com to offer an online note of sympathy.