Thoroughly Modern Millie, a show that was canceled a year and a half ago finally had its moment in the spotlight. Actors had eagerly awaited this night for three weeks wondering, “Will it happen?” With the rise of the delta variant, fear arose in the auditorium thinking about another potential missed opportunity. Thoughts wandered about that perhaps the show was cursed, but triumphantly the curtain opened to a brilliant audience on Friday night.

Thoroughly Modern Millie opened and closed with little drama and was a huge success. Audiences arrived filled with joy to finally be back in the theatre. Actors waited in the wings with a thrill to perform again. For so many people of Little Falls, this was their first time back to live theatre, and oh what a good way to return.

Talent filled the stage on August 6th and 7th as actors came back with something to prove. ‘Millie’ showcased its original cast, LFHS Alumni, and even performers from neighboring schools. With only three weeks of rehearsals, the actors knew every word, every dance move, and every harmony. Proving that they had pure dedication, and talent the actors of Little Falls came, and they conquered.

The musical itself transports audiences back in time to the Roaring 20s. Flapper dresses, tap dancing, and prohibition were all the jazz of this musical. It is the story of a young innocent girl who moves to the city with hopes to marry rich.

Millie’s plan goes awry when she meets one Jimmy Smith, a not-so-wealthy man, that gives her the address to a hotel in town. The Hotel Priscilla is owned by Mrs. Meers, a not-so-kind woman who kidnaps aspiring actresses and sells them off into slave trading.

Through twists and turns, young Millie finds herself falling in love, in jail, and even in a laundry basket. Though evil attempts to darken Millie’s new life she stops the twisted Mrs. Meers, who turns out to be a bitter man, jealous that he never got his moment in the spotlight.

“It really is so nice to see it all come together again. So many people don’t know how much it takes to really tell a story.” Natalie Nolan, who is portraying the title role, stated. “It takes more than just the actors. It takes an entire crew to build a set, put together costumes, and really make everyone look like they are from a certain era. So much goes on backstage that not even us actors know about.”

Dylan Harrer, who played the evil Mrs. Meers stated, “It is so nice to return to the stage, with such a talented cast. Some people came into this show brand new, with so much to learn, and they did. I have made so many friends from this experience, and am just in awe of what we all were able to do in three short weeks.”

Photos from the audience by Dave Warner – backstage photos by Jamie Oord. 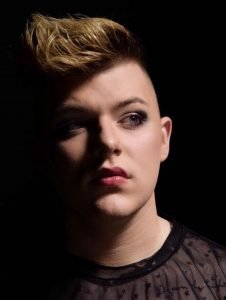 Jamie Oord is a young aspiring writer, raised in Little Falls; a town that he says has always had life, and culture in it. He’s always had a deep connection with the arts, and the beauty of everything that is under the artistic umbrella.

He hopes that he can bring more attention to the arts in this area. The town has always been an exciting place with events all over town year-round. In recent years, however, the arts have become more relevant in Little Falls. Jamie hopes to be able to tell the story of those in Little Falls who have created art here, and those that come from all over to share their abilities with the town.

Jamie has always strived to create stories whether it be through performance or words. From an extremely young age, he has been performing in musicals, plays, and concerts all around the state. As he got older he realized that sharing his artistic mind with the world was his calling.

You’ve probably seen Jamie on almost any and every stage in town from the high school, the old Happy Waffle stage, and even the gazebo in Burke Park.

Jamie is covering Arts and Entertainment for My Little Falls and if you have feedback on one of his articles or an idea for a story, please feel free to reach out to him at jamieoord@gmail.com. He would love to hear from you.