Mr. Edward J. Werenczak, age 90, a lifelong resident of his family home on Mason Road, Mohawk, passed away peacefully on Monday morning, November 29, 2021, at his home. At the time of his passing, he was surrounded by the love and support of his cherished family. 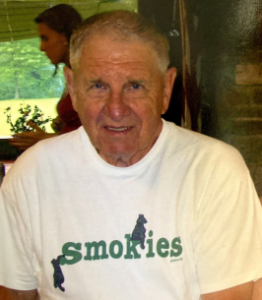 Ed was born on January 15, 1931, in Mohawk, son of the late Paul and Mary (Kasprowicz) Werenczak, and educated in Mohawk schools. Ed was united in marriage with the former Joan Wade on April 16, 1955, at Sacred Heart of Jesus, New York Mills; a loving and devoted union of 61 years filled with many happy memories, until Mrs. Werenczak’s passing on July 27, 2016. Ed and Joan were members of St. Francis De Sales Church, Herkimer. Ed was last employed with the New York State Thruway Authority maintenance department. Prior to working at the Thruway Authority, he and his brother, Ted, operated the family dairy farm. He truly loved spending time in the hayfield and on his tractor.

In his leisure time, Ed loved being with his family, especially grandchildren always attending events they took part in. He enjoyed watching the St. Louis Cardinals, Syracuse Orangemen, and the NY Giants.

In keeping with Ed’s wishes, there are no calling hours. Relatives and friends are respectfully invited to a memorial Mass of Christian Burial commencing at 10:00 am, on Friday, December 3, 2021, from the Church of Sts. Anthony and Joseph, South Main Street, Herkimer with the Rev. Terence Healy, officiating, assisted by Deacon James Bowers. Spring burial will take place in Mohawk Cemetery, Annex. Kindly consider and send memorial contributions in Ed’s memory to Hospice and Palliative Care, Inc. Ed and his family’s care has been placed in the trust of Mohawk Valley Funerals and Cremations, 7507 State Route 5, between Little Falls and St. Johnsville, 315-508-5131.  To offer an online note of condolence or share a memory, please visit www.mohawkvalleyfunerals.com