After the election, people headed over to the Elks Lodge on Ann Street for a feast, but sitting out front selling his wares, was David Dardzinski with Preserve Our Past. The goal was to raise funds for the restoration of City Hall.

In order to find out the costs for the project, an initial assessment report was completed on the building in 2014 by an architectural firm. The next step is to hire an architectural engineer and testing services to put together the drawings and specifications so that contractors can bid on the project. 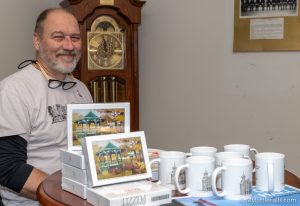 So right now, according to Dardzinski “We are raising funds to pay for that – the architectural services and testing, which there is very little grant money for. What money there is, comes in small amounts.”

The architectural portion of the project could reach $30,000 and the Preservation League has only identified a grant for $3,000 of that. “What we’re trying to do, is some of the work ourselves. We’re trying to get some volunteers from an architectural school to help with surveying what’s existing and trying to have some testing done of the materials that are questionable,” stated Dardzinski.

When it comes to the testing, contractors have to know what kind of materials they will be dealing with before they can bid on the project. Dardzinski stated “If it’s just the removal of floor tiles and dumping them in a dumpster, it’s one price, but if it’s hazardous, they have to do it in another manner and dispose of it differently.”

The testing, drawings, and measurements are all required before the project can move forward so that the community knows what the cost would be and whether there are any grants available to complete the project.

Right now, the group is attempting to raise anywhere between $30,000 and $50,000 to move the project forward. “What we hope to do as we move forward, a big chunk of that, maybe $8-10,000 is documenting the existing building,” said Dardzinski.

Only part of the blueprints of the building are available, and they are dated 1917. There have been a lot of changes and additions to the building since then, so they must be updated. Dardzinski said “The whole building has to be re-measured and redrawn for what is existing.”

The group is looking at any way to save money and move the project forward. If you’d like to help, or find out more, visit http://preserveourpast.org/.