If you would like to submit an event to the calendar, email the details to dave@mylittlefalls.com., or you can click on the button below and enter the information yourself.

Your entry will be reviewed before it goes live for accuracy.

Holy Family Church, also known as the “cathedral to the west” within the Albany Roman Catholic Diocese, is located at  763 E. Main Street in Little Falls, NY.

Immaculée Ilibagiza is best known for her book, Left to Tell. The triumphant story of this remarkable woman’s journey through the darkness of genocide will inspire anyone whose life has been touched by fear, suffering, and loss. Today, she is regarded as one of the world’s leading speakers on faith, hope, and forgiveness. She has shared this universal message with world leaders, school children, multinational corporations, churches, and at events and conferences around the world.

Immaculée grew up in a country she loved, surrounded by a family she cherished. But in 1994 her idyllic world was ripped apart as Rwanda descended into a bloody genocide. Immaculée’s family was brutally murdered during a killing spree that lasted three months and claimed the lives of nearly a million Rwandans.   -more-
HOLY FAMILY/2-2-2

Incredibly, Immaculée survived the slaughter. For 91 days, she and seven other women huddled silently together in the cramped bathroom of a local pastor while hundreds of machete-wielding killers hunted for them. It was during those endless hours of unspeakable terror that Immaculée discovered the power of prayer, eventually shedding her fear of death and forging a profound and lasting relationship with God. She emerged from her bathroom hideout having discovered the meaning of truly unconditional love-a love so strong she was able to seek out and forgive her family’s killers.

Immaculée has written six additional books in recent years: Led by Faith: Rising from the Ashes of the Rwandan Genocide, Our Lady of Kibeho, If Only We Had Listened, Visit from Heaven, and The Boy Who Met Jesus, and The Rosary. She has received honorary doctoral degrees from the University of Notre Dame, Saint John’s University, Seton Hall University, Siena College, Walsh University, and the Catholic University of America. She has been recognized and honored with numerous humanitarian awards, including The Mahatma Gandhi International Award for Reconciliation and Peace, the American Legacy’s Women of Strength & Courage Award, and the 2015 National Speaker’s Association’s Master of Influence Award. 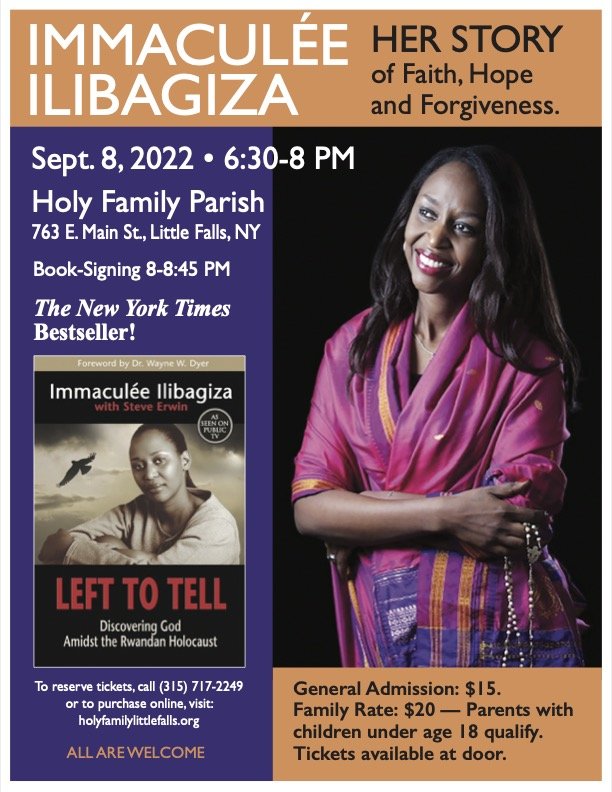