Alex Stone (left) and Daniel Preston make adjustments to the electric motor settings prior to the first static ground tests for the Luminati VTOL electric helicopter being built in Little Falls.

The first of eleven helicopters to be built in Little Falls is getting ready for static ground testing this week. Ten of those will be gas-powered, while the eleventh will be an all-electric version. The electric version is the same as a military gas-powered model, where 95 were produced for the Navy.

Luminati Aerospace was awarded the contract by a major company in the field that was so impressed with what was going on that they decided that they’d box their factory up and ship it to Little Falls as well, letting Luminati do all of their manufacturing.

The motor is being fine-tuned on the electric version, as electric motors are similar to the gas versions in that they can be fine-tuned.

Once the full-scale ground tests are complete, they will start flight testing of the helicopter.

Right now the prototype electric model is being assembled at PEMS on Southern Ave, while construction continues at the former Redco site at Hansen Island. All of the machined helicopter components, including the electric motors, are being produced in Little Falls.

The two-story segment of the building on the east side of Hansen has been rebuilt with double-height ceilings to accommodate the composite production line-up that will produce the aircraft wings and fuselages for the craft. That area that produces the composites has to basically be a ‘clean room’ in order to produce the shells.

Once completed with the body and blades on them, all of the helicopters will look the same from the outside.

All of the equipment to produce the composite shells is onsite at Hansen Island and just has to be moved into the new area and hooked up.

Just one of the machines took eight tractor-trailer loads to move it to its new location. In total, there were twelve truckloads that were dropped off at the new factory site.

A team from Germany will be arriving before the end of the year to hook all of the equipment up and make the first run. 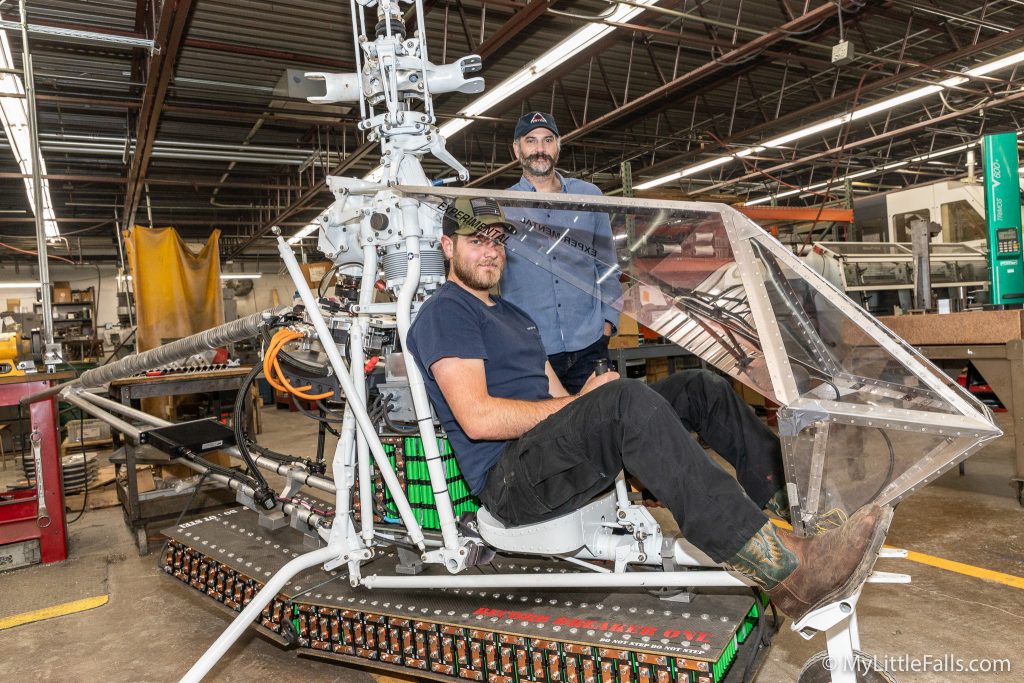 Photo by Dave Warner – The batteries have been installed and connected, the electric motor is attached, and final preparations are being made for static testing of the first electric helicopter to be manufactured in Little Falls.