The immediate and extended family of Mr. and Mrs, Frank J. Matus, Jr. gathered together at the Canal Side Inn to celebrate 60 years of marriage between Frank and Marie Matus following a mass and blessing by Fr. Slezak of the couple at a mass at the Holy Family Parish. 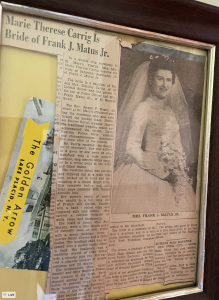 Photo submitted – The Little Falls Evening Times published an account of the wedding in October 1961 that recounted the day painting the picture of the altar dressed with white gladiolas and chrysanthemums and Marie being walked down the aisle by her father as she was attired in a gown of silk peau de sole fashioned with wide portrait neckline, long sleeves which tapered to a bridal point at the wrist and fitted bodice.

Frank and Marie were engaged and married in 1961. While not love at first sight, the couple met at Lablaw’s grocery store in Little Falls where Marie was shopping with her mother and Frank was working as a butcher behind the meat counter. They later engaged when Frank proposed to her at Moreland Park. Marie accepted his proposal and they were married at St. Mary’s Church on September 30, 1961.

The happy couple recounted how it was not love at first sight but that as time went on, they grew closer together and gave advice to their family to recognize that a strong, lasting marriage is predicated on never going to bed mad at each other, always be united in public and work through the difficult times together. They have demonstrated true love, friendship and are exemplary role models for married couples.

Both Marie and Frank grew up in Little Falls and, if only not for a brief time away, have lived their entire lives in the City of Little Falls. Marie was committed to raising their family of five sons while Frank enjoyed a career at General Electric in Utica for over 30 years. They retired in Little Falls in 1994 and moved from Diamond St to Top Notch Drive in 1998. Marie and Frank’s five sons returned to Little Falls with their families for the event (Joseph & Kathleen; Robert and Ann; James and Barbara; Richard & Janine and Frank & Paula). Their nephews and niece (Timothy & Jane Carrig; James Carrig and John & Kathryn Dingman) also attended the event.

Marie and Frank expressed their appreciation of their Diamond Anniversary celebration by getting together with their family following a long absence during the COVID-19 pandemic. The absence made the celebration all the better for the family and celebrating 60 years of a love story together was fitting.

The family would like to extend a thank you to the management and staff at the Canal Side Inn, especially Katie and Chef John, and Fr. Slezak for the special blessing.