Governor Kathy Hochul today announced that Little Falls will receive $10 million in funding as one of the Mohawk Valley region winners of the fifth round of the Downtown Revitalization Initiative (DRI). As part of DRI Round 5, each of the state’s 10 regional economic development regions is being awarded $20 million, to make for a total state commitment of $200 million in funding and investments to help communities boost their post-COVID-19 economies by transforming downtowns into vibrant neighborhoods. 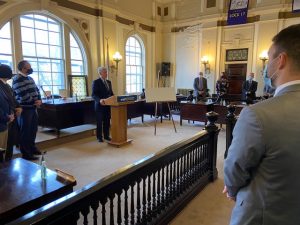 “All New Yorkers deserve access to a lively downtown area where they can find a well-paying job and an affordable place to live, and the Downtown Revitalization Initiative helps make this a reality,” Governor Hochul said. “The revitalization of Little Falls’ Waterfront District will be yet another success story of this project, as all who live and work there will enjoy continued economic prosperity and a pristine community environment.”

Lieutenant Governor Brian Benjamin said, “New Yorkers deserve easy access to not only a vibrant downtown but good-paying jobs and affordable living. This grant will ensure more economic revenue and job creation in Little Falls and will help put New York on the road to build back better than ever.”

Led by the Department of State, the DRI serves as a cornerstone of the State’s economic development policy by transforming downtown neighborhoods into vibrant centers of activity that offer a high quality of life and attract redevelopment, businesses, jobs, and economic and housing diversity.  In this round, Governor Hochul doubled funding from $100 million to $200 million and allowed each Regional Economic Development Council to decide whether to nominate two $10 million awardees or one $20 million awardee for transformative and catalytic downtown redevelopment projects. Like past DRI rounds, each selected community will develop a strategic plan through a bottom-up, community-based planning process that articulates a vision for the revitalization of its downtown and identifies a list of signature projects that have the potential to transform the downtown and leverage further private and public investments. DRI funds will then be awarded for selected projects that have the greatest potential to jumpstart revitalization and realize the community’s vision for the downtown. Through the DRI, the New York State Energy Research and Development Authority (NYSERDA) will provide technical support to the awardees to assist them with including carbon-neutral principles in support of the state’s goal to reduce greenhouse gas emissions by 85 percent by 2050. 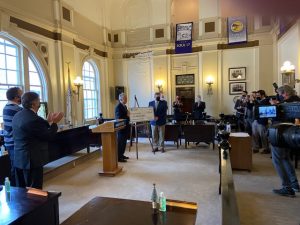 Little Falls‘ DRI will focus on the Waterfront District. As the only city in Herkimer County, Little Falls wants to become the most desirable residential community in the region by reconnecting isolated parts of the city to create a single downtown waterfront district. The city has seen approximately $11.6 million in recent and ongoing investments and anticipates another $76.8 million in the future. These investments include new apartment housing, a bourbon distilling site, and a proposed new train station providing passenger service. Building on this momentum, Little Falls aims to increase housing opportunities, expand pedestrian/bike connectivity, and increase bike/pedestrian safety within the downtown area.

The Mohawk Valley Regional Economic Development Council conducted a thorough and competitive review process of proposals submitted from communities throughout the region and considered all seven criteria below before recommending Little Falls as one of the nominees:

Little Falls will now begin the process of developing a Strategic Investment Plan to revitalize its downtown with up to $300,000 in planning funds from the $10 million DRI grant. A Local Planning Committee made up of municipal representatives, community leaders, and other stakeholders will lead the effort, supported by a team of private-sector experts and state planners. The Strategic Investment Plan will examine local assets and opportunities and identify economic development, transportation, housing, and community projects that align with the community’s vision for downtown revitalization and that are poised for implementation. The Strategic Investment Plan will guide the investment of DRI grant funds in revitalization projects that will advance the community’s vision for its downtown and that can leverage and expand upon the state’s $10 million investment. Plans for the DRI’s fifth round will be complete in 2022.

Acting Secretary of State Brendan C. Hughes said, “The Downtown Revitalization Initiative is helping to transform downtowns across the state into thriving hubs of activity. Little Falls is the latest community to benefit from this program, which will help build upon recent investments to connect to its waterfront along the Erie Canal. This $10 million award will go a long way toward increasing opportunities for residents, businesses and visitors to Little Falls and the Department of State looks forward to working with the city to bring its vision to life.”

New York State Homes and Community Renewal Commissioner RuthAnne Visnauskas said, “The DRI program is driving the renovation and restoration of important downtown resources in every region of the state. Little Falls is set to put this $10 million investment to work for its residents and to activate its historic downtown with commerce and new visitors. Thanks to Governor Hochul and our visionary local leaders in Little Falls, we’ll keep the momentum building in the Mohawk Valley.” 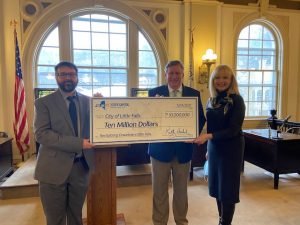 NYSERDA President and CEO Doreen M. Harris said, “We congratulate Little Falls on this award and look forward to working with them as they create a vision for their waterfront that includes carbon-neutral principles. As we transition to a clean energy economy, downtown revitalization efforts across the state will create opportunities and enhance the quality of life of residents while at the same time reducing harmful emissions in support of our climate goals.”

New York State Canal Corporation Director Brian U. Stratton said, “Today, we celebrate the City of Little Falls along the iconic Erie Canal as it joins nearly 20 other Canal corridor communities in receiving strategic funding through the State’s Downtown Revitalization Initiative program. Governor Hochul knows the key to effective downtown revitalization is a strong partnership between local government and the State. The City of Little Falls has clearly demonstrated a commitment to ensuring their canalside community continues to prosper by activating a connected downtown waterfront district. For nearly 200 years, the Erie Canal and the Canal system have been drivers of economic development, allowing a necklace of communities to grow and thrive, and this investment ensures Little Falls will continue to flourish.”

Senator Peter Oberacker said, “Little Falls won New York State DRI funding thanks to a plan that exhibited a compelling vision for economic development and community growth centered on the downtown hub. Natural waterfront resources, a rich cultural heritage, and innovative ideas from local stakeholders made for an unbeatable application. Little Falls has a storied history, and this transformational initiative will help lead to a successful future for the city and the entire Mohawk Valley region.”

Assemblymember Brian Miller said, “I am thrilled that Little Falls is receiving this funding as part of the Downtown Revitalization Initiative, this will be a huge and much-needed boost to the region. With this money, we will be able to create a unified waterfront district in downtown Little Falls. I look forward to seeing this project break ground and hope we will be able to get construction done in a swift and timely manner.”

Little Falls Mayor Mark Blask said, “While the City of Little Falls has an impressive history, our best days are still ahead of us. This strategic and historic investment of $10 million from the State of New York will leverage our existing assets with new and cutting-edge technology that will take our small city into the next generation. Our bold agenda to Rethink, Rebuild, and Reconnect the heart of the City has now been made possible under the leadership of Governor Kathy Hochul. I applaud her efforts to continue to advocate on behalf of communities like ours in the Mohawk Valley.”

MVREDC Co-Chairs Lawrence T. Gilroy III, President of Gilroy, Kernan & Gilroy, Inc., and Dr. Marion Terenzio, SUNY Cobleskill President said, “The MVREDC is excited about the possibilities created by this DRI investment. A more connected Little Falls community will add to the city’s desirability as a Herkimer County destination, and we look forward to working on plans that will make this vision a reality.”

About the Downtown Revitalization Initiative

The Downtown Revitalization Initiative launched in 2016 to accelerate and expand the revitalization of downtowns and neighborhoods in all ten regions of the state to serve as centers of activity and catalysts for investment. Led by the Department of State, the initiative represents an unprecedented and innovative plan-to-act strategy that couples strategic planning with immediate implementation, bringing with it an interagency team of state experts to support local government capacity in realizing their community’s vision.

In the first four years of the program, the state committed $400 million to invest in downtowns that are ripe for revitalization and have the potential to become magnets for redevelopment, business, job creation, greater economic and housing diversity, and opportunity. The fifth round of the DRI will have an additional $200 million commitment. Participating communities are nominated by the state’s 10 Regional Economic Development Councils based on the downtown’s potential for transformation. Each community is awarded at least $10 million to develop a downtown strategic investment plan and implement key catalytic projects that advance the community’s vision for revitalization and leverage additional private and public investments.

The initiative is headed by the New York State Department of State. Communities receive support from private sector experts and a team of state agency staff led by the Department of State in close partnership with Empire State Development, and state Homes and Community Renewal.

The Little Falls Downtown Revitalization Initiative (DRI) is about rethinking the heart of Little Falls as an integrated district and seeking bold, innovative opportunities to propel the City into the most desirable residential community in the region…attracting a diverse population supported with commercial and residential development, quality-of-life amenities, redevelopment of historic properties, and a tax base that provides sustainable prosperity for future generations. For more information visit:  https://littlefallsdri.com.