A view of Green Acres restaurant in Dolgeville New York during their opening week, 2021.

Green Acres Drive-In in Dolgeville has been an area staple for more than 66 years now, but it’s getting ready for another generational change in management, with a younger family member being trained to take over the business.

Darin Darling is one that you’ll now find working the business and being more and more involved in the direction of the restaurant and what you’ll find on the menu.

Darling stated, “My grandmother, who owns it now, took it over about 33 years ago from her father. We’re like a derivative of the classic diner/drive-in style American cuisine.”

If you have not been there, they do burgers, fried dinners, and sides and sandwiches, and they have a full-time ice cream parlor as well.

“We’re trying to branch out a little bit into more ‘culinary’ things, and do some more exploratory things. Last year, we started doing specialty burgers and that was part of this exploration as well,” he stated.

Darling has been there ten years now and said, “If you were in our family, you were kind of expected to work here. You really didn’t have a choice. So that’s how I started, but over time, and through college, I knew that I wanted to be in business, but I just fell in love with food service and the culinary world.”

So for him, he thought what better opportunity than the one in front of him in his hometown, working with his own family. “For the last three years or so, we’ve really been working that transition to get me into the management role and prepare for the future.”

Darling said that he never set out to be in the culinary world, or in the families business, but that he’d probably end up in finance or some of the more traditional sectors. “I got close to graduation and just thought, I love Dolgeville and I love Green Acres and I love our family, and if not me, then who’s going to do it?”

He thought about it, and then called his grandmother Ruth to talk with her about it and she said, OK, but you have to know what you are getting into, “So, we just dove right in,” he said. 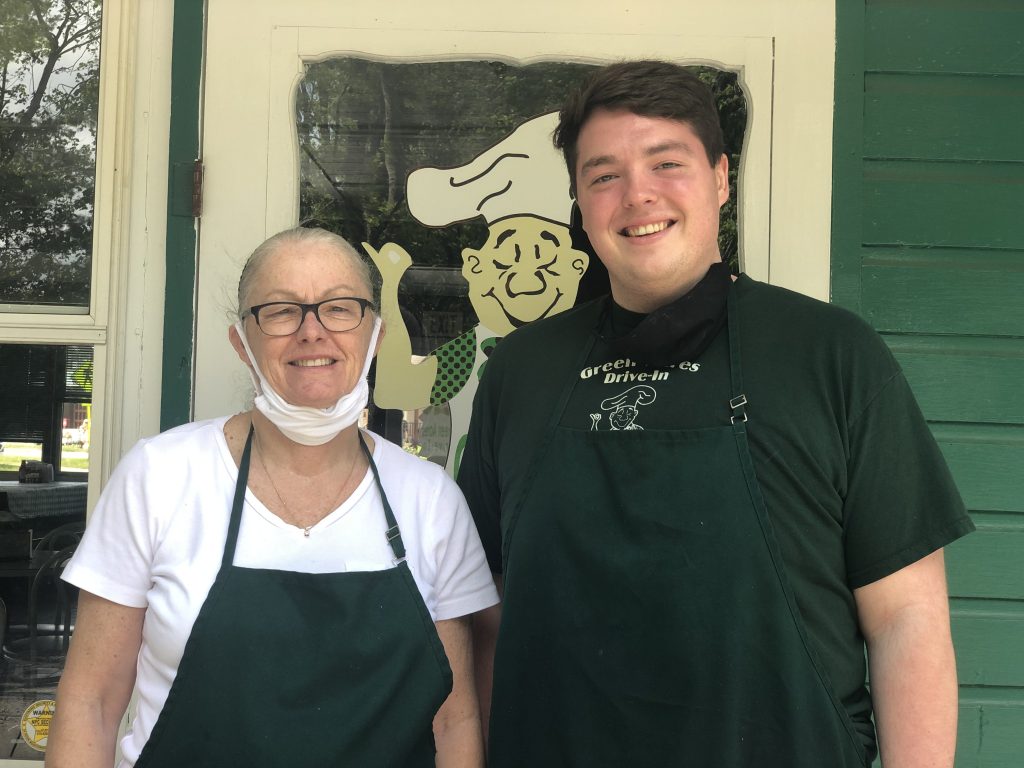 She told him that it was 100 hour work weeks and every day from the start of March until the end of September. Darling said, “I love the 100 hour weeks and I love the hot kitchen. Our rule is that whatever the temperature is outdoors, it’s at least 15 degrees hotter in the kitchen.”

Jaikin said, “I think this is great because it relieved me of a lot of pressure. My daughter didn’t want to take it over, so this is awesome to have it stay in the family.”

She said that she’s given Darling a few years timeline at the most to figure the business out. “I just turned 63 so it’s getting harder.”

Jaikin said that he is already having an impact on the business. “He’s the one that came up with the specialty burgers and he’s here every day, almost as much as I am.”

“He’s also doing the hiring now and I’m starting to teach him the ordering. I’d like to say he’s about halfway through his learning curve. The hardest part is employees and staffing. The rest of it just falls into place,” she stated.

Darling said that if you go all the way back to their beginning, it just started as a shack doing hot dogs and hamburgers. In the late ’80s, they bought their first soft-serve ice cream machine and turned it into more of a full restaurant.

“If you walk through the back, you can see the different sections as they were added over time. It’s gone from a two-person shack to a full restaurant with a dining room.  We pushed out the ice cream section of the building four feet this year, which doesn’t sound like much, but I can’t tell you what a difference that has made. We used to bump into each other in the ice cream section,” he said. “Right now, it’s almost bigger than our kitchen in there.”

Darling says that ice cream is always everyone’s favorite, but he thinks their Mexican hot is probably the top seller for the older crowd. “They come at the end of our season and buy pints of the sauce. I hate to admit it, but I only had my first Mexican last year. It’s so simple, but it’s delicious.”

Darling said, “You wouldn’t believe the people that come in on a Sunday afternoon and say, yeah, we came from Saratoga or Albany. It blows my mind sometimes.”

They have had everything from car shows to concerts and DJs at the location. “Little mini things where DJs will come or we’ll have a small band out on our lawn. These two years have been pretty crazy, but hopefully, we can get back into doing things like that next year,” he stated.

Green Acres employs between 12 and 16 people a year, depending on the season. You can find more information about them on Facebook or on their website.