In the 1950s and 1960s, Little Falls was a bustling blue-collar mill town of about 9,000 people with many hard-working citizens employed in its numerous factories.
Most of the factories were on Mill Street which ran parallel to the railroad tracks on the southern side with a few factories on the other side of the tracks. My parents, and most of the parents of my friends, worked in the mills. None wore a tie to work.

The South Side is separated from the North Side by the New York Central Railroad, Mohawk River, and the Erie (Barge) Canal. Over the canal was a lift bridge that went up to let the large freight-carrying barges pass underneath and caused the cars to wait until it was lowered so that traffic could go back and forth from the North Side to the South Side. The old slow-moving West Shore Railroad ran along the southern edge of the South Side so that residents would hear the rumbling of the freight cars day and night as they ran through the neighborhood. Flint Avenue and Casler Street were backed right up to a large mountain that people called “Ochies” that bordered the southern side of Little Falls. 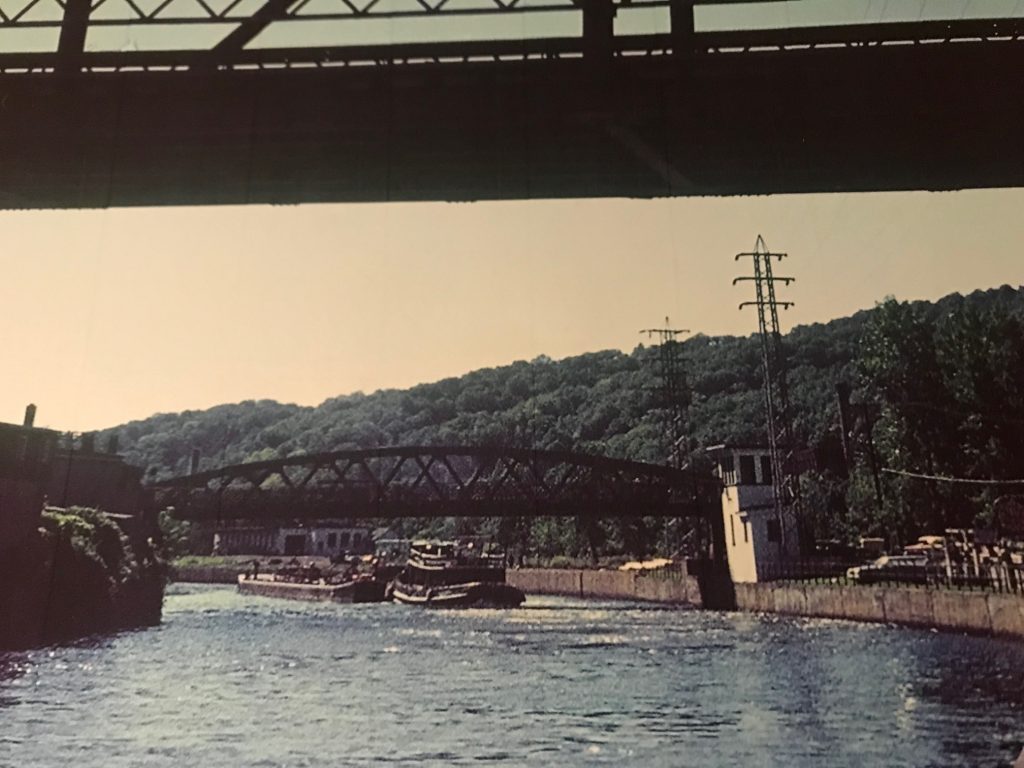 The experiences and perceptions of growing up on the South Side of Little Falls vary from generation to generation. Although much is the same, there are clear differences. When the arterial was developed in the mid-1960s it wiped out West Jefferson Street which was much of the “heart” of what my generation referred to as the South Side. It also contributed to a marked change in the culture and spirit that once characterized the South Side, at least the South Side as my generation knew it and remember it.

During the 1950s and 1960s, the South Side flourished with small family-owned stores and businesses that made the community pretty self-sufficient. There was Lamanna’s Grocery Store, two grocery stores owned by the extended Scarano family, Zambri’s Bakery, and Gaspers Grocery Store. There was also Angie Colangelo’s candy store, Josie Lamanna’s novelty shop, Staffo’s Cigar Store, Becker’s Garage, Lamanna’s barbershop, Ruffo’s appliances, Restante’s Dairy and ice cream parlor, the National Grill and Czech Tavern. Columbus Park, where everyone congregated to play sports, was on what was West Jefferson Street next to the canal. It had a ball field, playground, wading pool, and a bandstand where in earlier times band concerts used to be held. Before my time, the St. Rocco’s Day festival was celebrated at Columbus Park. 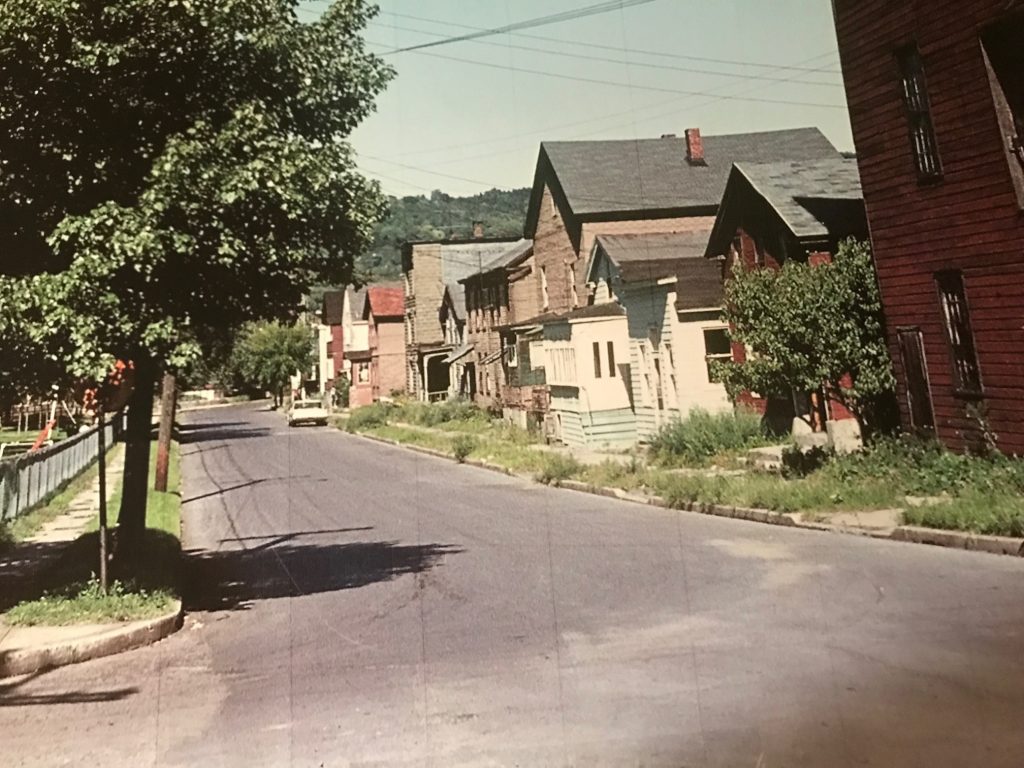 Little Falls Little League started in the early 1950s on a field on Southern Avenue next to Bill Filipski’s Lumber Yard. In the 1960s, Filipski opened a bowling alley called The Golden Pin. Viola’s, technically named The Coffee Cup but really known for its pizza, was right across the river. There was also the ice-cold spring water that came down from the mountain in front of the Staffo house that many people from throughout the Mohawk Valley came to fill up their jugs with and take home. We had pretty much everything that we needed.

The South Side at that time and for many years before that was populated predominately with close-knit Italian families who lived mostly on West Jefferson Street, West Shore Street, Flint Avenue and Casler Street, with some Slovenians and Slovaks on Southern Avenue and up on Danube Street. 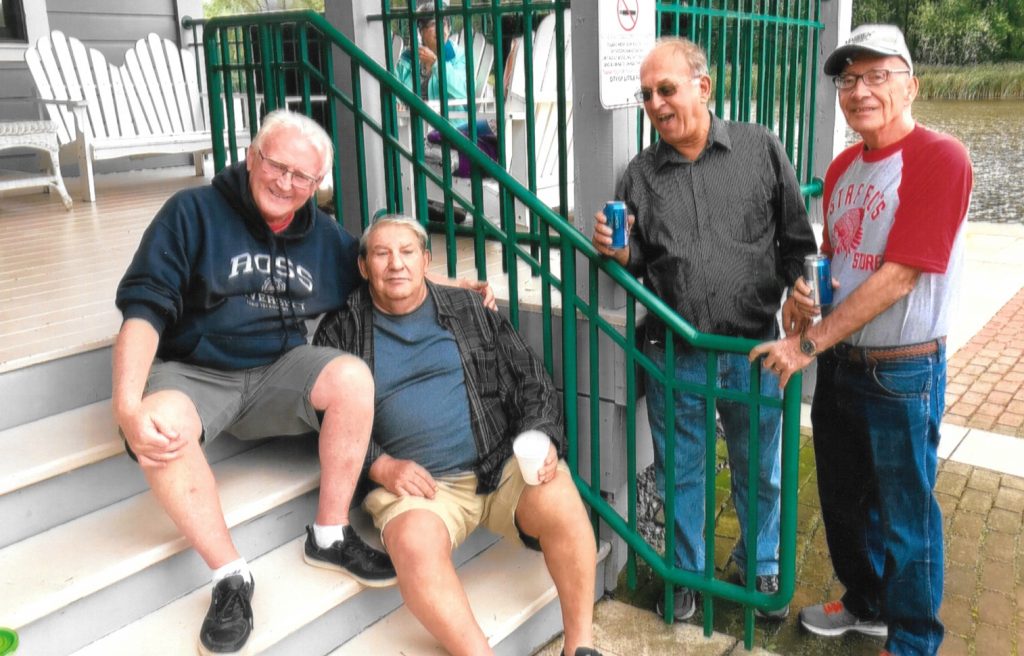 Pre-teens and teenagers on the South Side in the 1950s and 1960s, the group that I grew up with, had names like Lamanna, Ciletti, Staffo, Paparella, DePiazza, Chizzonetti, DeRosa, Barone, Ciano, and Diodati. The age group just ahead had names like Moracco, Papaleo, Mastamateo, Colangelo, Lanza, Fantera, Battisti, Terzi, Visconti, Checci, Minarchi, Lorenzoni, and Restante. The age group just behind my group had names like Ruffo, Rovetto, Verri, Orsini, Carracane, Tomei, Healey, and Green. There was and remains a lot of pride about growing up Italian on the South Side. For many of us, it was our identity and how we were identified by most North Siders.

There were about 15 or so boys in my age group from around 1952 through 1966 who grew up and hung around together before going on our own life journeys after high school. Most of us loved sports. As preteens and teenagers, most of us were pretty athletic, with many of us making the Little League and Babe Ruth League All-Star teams and several later on moving on to play on varsity teams in high school. Therefore, virtually every day during the summer we congregated at Columbus Park where we played- mostly sports- almost all day long.

Regardless of the sport, we picked captains and chose teams, settled all our disagreements by throwing fingers odds and evens, and played continuously until it was time to eat, which occurred when we could hear our parents walk to the edge of the park to yell for us to come home. After eating, we went back, chose up new teams, and continued playing. Whenever there were only two or three guys there, we frequently “hit ‘em out,” meaning a fungo hitter hitting fly balls to two or three guys. 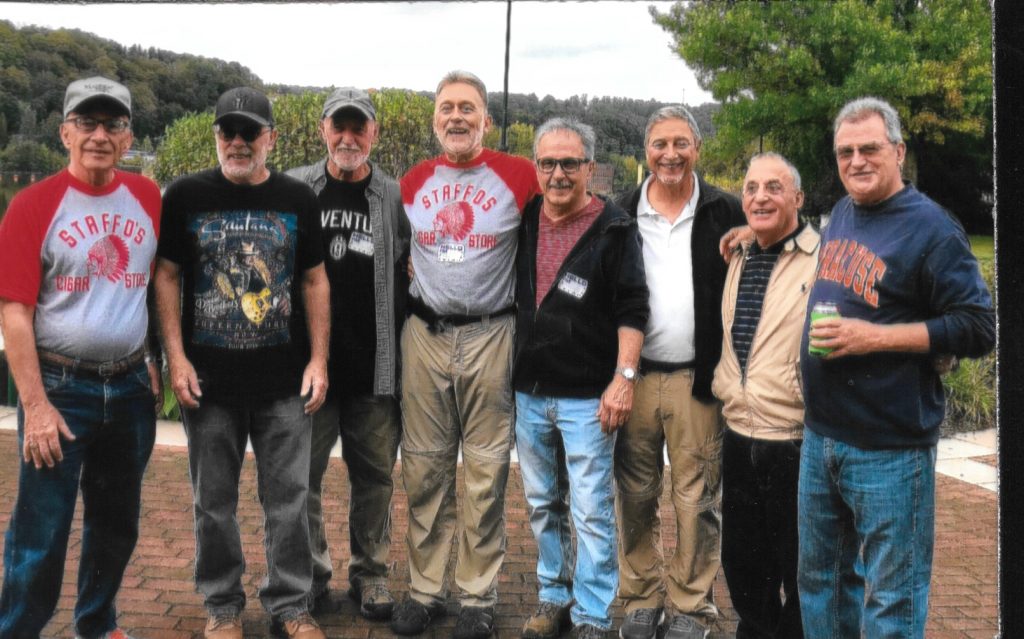 We played basketball on the outdoor courts at Jefferson Street school. Besides baseball and hard tackle football, we competed in various sports-related activities like wiffle ball and pee wee football in the streets, stoop ball against the steps in front of the Paparella residence, and all kinds of games like steal the flag among many others. We lined up along the edge of the park next to the canal and, using broomsticks for bats, had “home run” contests by seeing who could hit the most stones across the canal. We paired up in the street next to Angie’s and threw ground balls to each other. Three successful catches signified a half-inning then the other person threw ground balls. A mishandled ball (error) resulted in a “run” for the other person.

Another frequent hangout was Lamanna’s Store where we also played stoop ball, marbles, and Tops with baseball cards, and flipped baseball cards to see who could get their card closest to the wall. It was always friendly competition no matter the activity. We occasionally challenged our friends from the North Side to sports contests. As fifth and sixth graders representing Jefferson Street School, in competition organized by elementary physical teacher and high school coach Wilbur Crisp, we played against our peers in the other elementary schools scattered throughout the North Side.

When we weren’t playing sports, it seemed like every summer day we discussed the results of the previous day’s Major League baseball results, debating the merits of our favorite teams and players. It seemed like we were consumed with sports.

It was a different time. There was only one television station, WKTV out of Utica, so we rarely watched TV. Therefore, we were outdoors and active all the time. We regularly walked up Casler Street to the top of “Ochies,” or down the tracks to the old stone crusher to go BB gun hunting. We fished for suckers, carp, and bullhead in the Mohawk River. We had overnight sleepouts and roasted potatoes and marshmallows by the West Shore tracks. We rode our bicycles all over town, sometimes to Burwell Street to play baseball on the Little League field. In the winter we walked to the Monroe Street skating rink.

When we became teenagers, we congregated at Masle’s Pool Hall, a kind of “right of passage” for young guys growing up on the South Side. On Friday nights. we sometimes walked as a group up to Kandyland, the city hangout for most of Little Falls’ teenagers during this time. When we walked in sometimes North Siders would kiddingly quip, “Here come ‘the Wops.’ The same when we went “up street,” meaning the North Side, to school or city dances or band concerts.

It was a great childhood and to this day my friends and I fondly reminisce about those great times. Great memories.

Donald Staffo is a member of the Little Falls Historical Society.