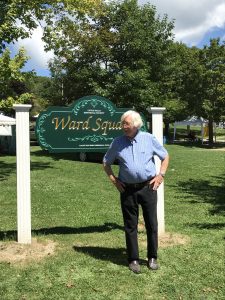 Back in the 1980s, Hector Allen took the time to interview World War II veterans from Little Falls about what their experience was like. The videos are similar to those that we put together with Ralph Renzulli and his Through My Eyes series, which focused on Little Falls Vietnam Veterans. So, who was Hector Allen? Louis Baum wrote just a short piece below to set up the videos that follow.

Hector Allen, a St. Johnsville native, was a history teacher for over thirty years at Little Falls High School and is the longtime historian for the Town of Oppenheim. He is the author of the two-volume set “Oppenheim Chronicles” along with “Oppenheim in the War of the Rebellion.” He was the founder, and many years president, of the Galpin Civil War Roundtable, a group of area Civil War enthusiasts who traveled to many southern battlefields and cataloged Herkimer County’s role in the war. Hector, along with fellow teachers Ralph Van Horn and Joe Loiacono, over a three-year period, filmed the iconic “Walking Tour of Little Falls History.”

Hector has lectured extensively throughout the Mohawk Valley on various topics of our rich valley history.

These interviews of World War II veterans were conducted in the 1980s by Hector to capture the personal memories of many teachers and staff members of the Little Falls school system and other community residents who had well served our nation. Most of them have since passed away, but the interviews remain an important part of local lore.

Thank you Little Falls Historical Society for loaning the DVDs to be viewed.