It’s a little bit out of the way, but worth the few minutes it takes to get there

Kelly Daukontas takes down the information on a new member for the Live Well Fitness Health & Wellness Center at 661 County Road 120.

There seem to be a lot of fitness options out there, but the dream facility that Kelly Daukontas built has to be seen in person in order to realize how special the location and what she has built is.

Daukontas grew up right at the bottom of the hill where she built the Live Well Fitness Health & Wellness Center at 661 County Road 120. That gives it a St Johnsville address, but it’s really only minutes from Dolgeville or Little Falls.

“I was born in the house that my husband and I now own. I lived there until I was three and my dad purchased the farm from my grandfather. I was a dairy farmer’s daughter,” she said.

She went to college to become a vet tech and worked for the Little Falls Veterinary Clinic and Dr. Spaulding for thirteen years. “I loved it there and had a great job.”

Daukontas has two children and her husband teaches in Dolgeville. “We were high school sweethearts and both from the area.”

“It was after the birth of my second child when I really got into fitness as most people do. I had a baby and I was ready to shed some pounds. I think historically speaking, most women tend to start running, eat lots of salads and do plenty of cardio,” she stated.

Her sister had heard that if women lift weights, it was better for them and for fat and weight loss. “I started going to the local Y in Little Falls and I just fell in love with resistance training and training with weights. I felt like it was the only thing I’d tried in my life that I could stick with that gave me results.” 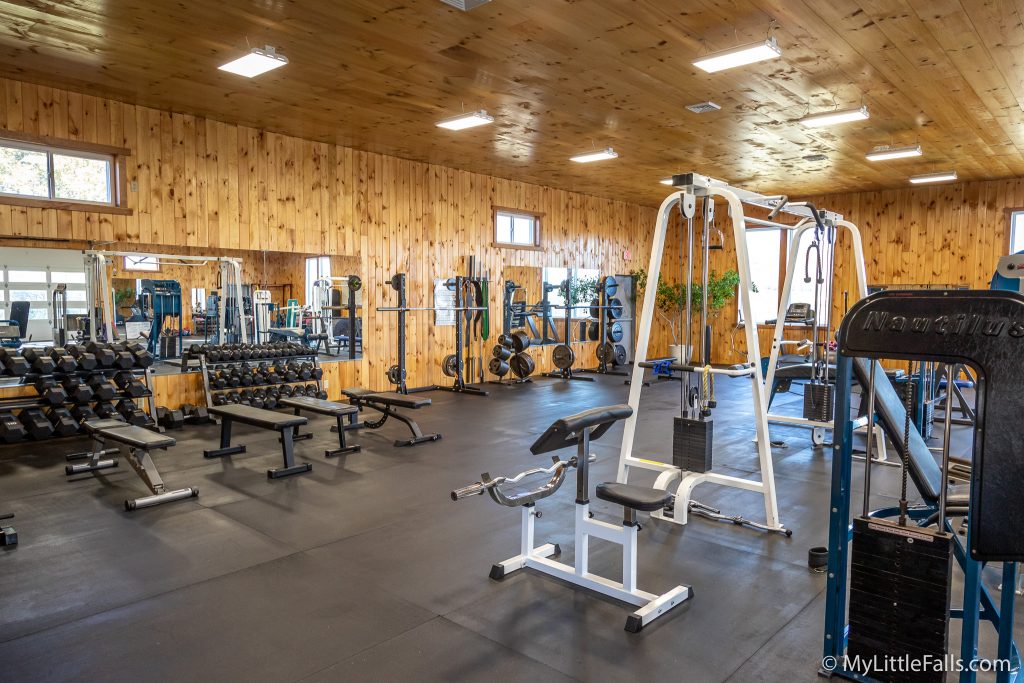 She said that nutrition is always a problem for women because of the number of fad diets that are out there. “There are all these different things, and what should you do? That’s what led me to get certified in nutrition almost four years ago now. At first, it was purely for my own interest, but then there were a lot of women that reached out to me and asked for help.”

Daukontas found out that there was a real need for that kind of help and education, and she started helping other women as a ‘side hustle’ while still working as a vet tech and mom.

“I would see women at my house and we’d go through weight training, their food journal I’d help them with healthier alternatives and what they’re eating and how to read a food label. You’d think most people would know these things, but the way marketing is so confusing now – when they say low sugar or low fat you think it’s healthier. But, when you turn it over and read the ingredients and understand what you’re eating, you might think differently,” she stated.

While she was doing all of this, she realized that a lot of women wanted to know what she did and to be able to exercise the same way. “I really couldn’t give them training or a plan because I wasn’t certified. So, a year after I finished my nutrition certification, I impulsively purchased the personal training certification, which took me six months to complete.”

At this point, two and a half years ago, they converted the one-car garage at her house to hold classes. “I was training a lot of people one on one in the garage and it was a very basic setup. Very Simplistic. You don’t need a ton of equipment, you just need to know how to use it in the right way.”

Then she thought that during the summer, she could extend what she was doing by opening the garage door and using the driveway to allow more women to participate. “So, I started a class called ‘build and burn’ which was teaching women how to confidently lift weights. It was kind of like circuit training. We got the best of both worlds.”

Through all of that, she says that she grew a really nice base of her ‘build and burn’ girls that allowed her to expand. “When I really started to get busy, my husband said I think you need to choose. You’re working almost full time at this and as a vet tech.” 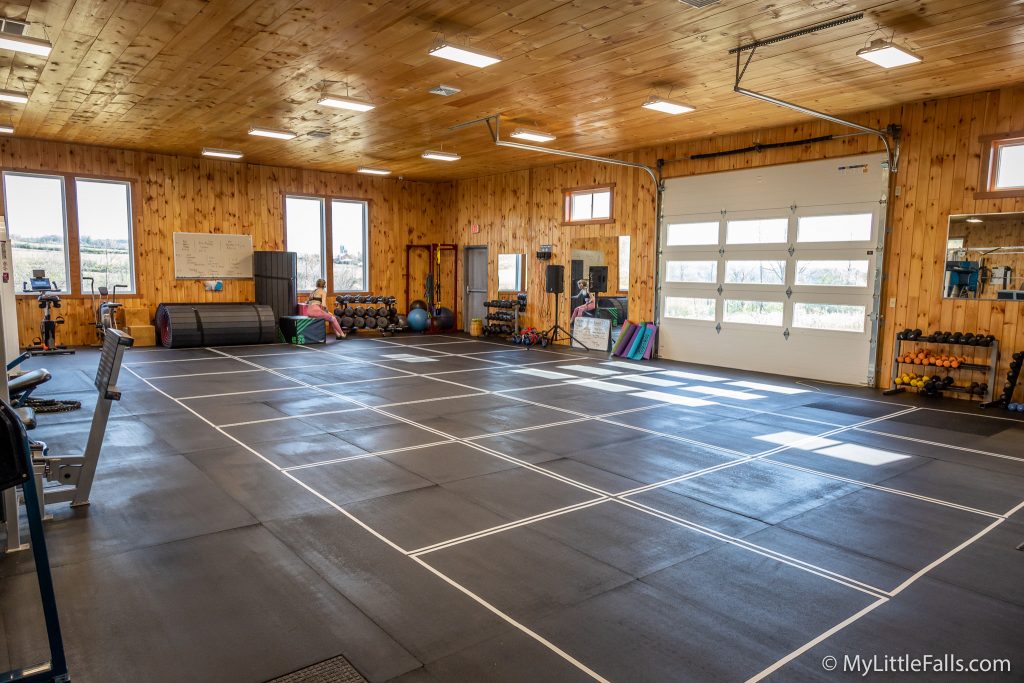 “It got hard to manage, but it was hard to leave a secure job that I’ve had for thirteen years that I really enjoyed. It was probably the toughest decision that I’ve ever had to make. Handing in that resignation letter was just the hardest thing to do. I was holding back tears because I didn’t want to disappoint Dr. Spalding because I admired him a lot,” she stated.

That was in June of 2019 and then COVID happened. “I’d just given up a job that I’d had for thirteen years and all the gyms were closed,” she said.

They had not started building the new facility, but they had looked at the land at that point. The couple had also looked at some old buildings in Dolgeville and other potential locations.

“We were getting nowhere with finding a location to build a gym. We thought that building from scratch would be way too expensive and not manageable,” she said.

However, she contacted a Mennonite that owned the four-acre plot of land where their facility is now located and he sold it to them. “He gave us a great deal that we couldn’t ignore and we decided that we were going to build.”

Daukontas felt that there was some risk, but that she had a good following that would make it work. “I would regret it if I had never tried.”

They bought the land last May and started building the 3,600 square foot facility in June, and they’ve been officially open since January 1st, and since then, she feels that they’ve really built an awesome community.

For services, they have a members-only open gym with 24-hour access. “Our members have a little key fob and they can come any time they want,” she stated.

They offer personal training, group classes, nutrition counseling, two bathrooms with showers, central air and heat, and a stellar view. “It was beautiful when the trees had their full foliage. We have just about everything you need to get strong and healthy here,” she said. 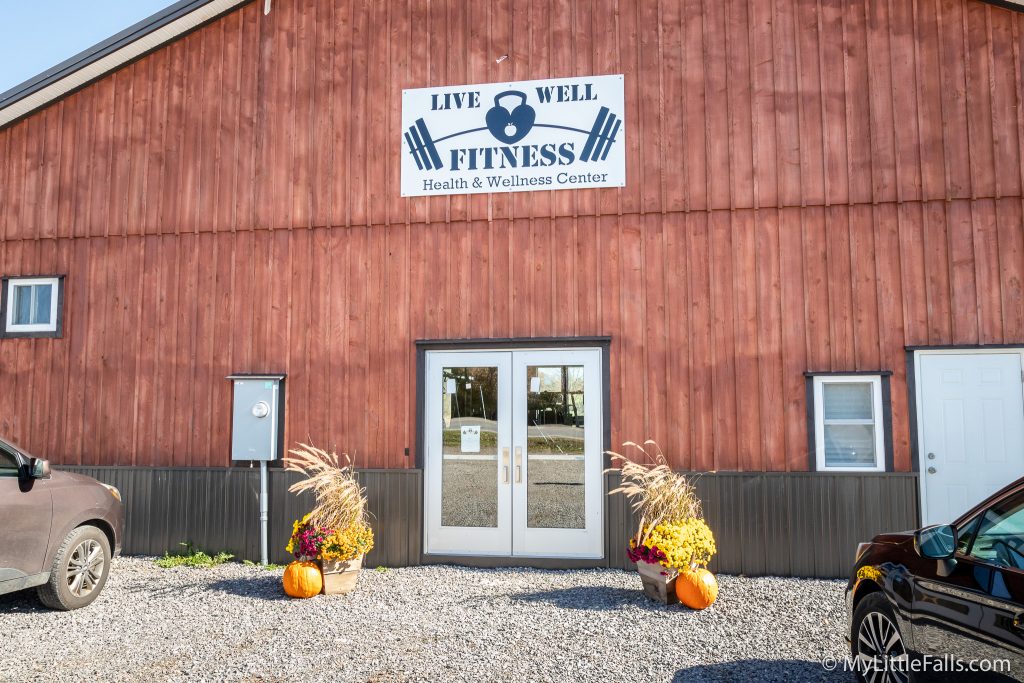