You know you’re in the middle of summer when you find out that the Burns Sweet Corn is ready to be harvested, and this year, it looks like it will be ready the first weekend in August according to owner Tom “Burnsy” Burns.

His daughter, Sharon Ward says, “Sweet corn season has always been the sweetest season of all. What can I say? Not only does Burnsy have the sweetest corn in the valley, but that is where I met my husband, in the cornfield picking corn, and to this day it is truly the best sweet corn.”

Ward continued, saying “Growing up on a farm has been one of my life’s greatest blessings. I wouldn’t trade it for the world. We did not get the chance to travel or go on vacation as kids, but we had so much more available to us than most people did, right in our own backyard. With over 100 acres as our playground, I knew every bit of that land like the back of my hand by the time I was in high school.”

Burnsy’s great grandfather emigrated from Ireland and bought the farm somewhere around 1860, and the Burns family has owned and operated the land for four generations.

Burnsy said, “I was the only one of five kids that were actually born on the farm in this house. My mother never got to the doctor in time, so Dr. Santry from Little Falls delivered me and he got here in time I guess.”

“Burnsy has always been a farmer at heart. He was raised on a farm and then bought his own dairy farm shortly out of high school after he married my mom. They raised us four kids on the family farm until they could no longer keep up with the demands of the hard work and the low prices they received for milk. He sold the farm around the time we all went off to college, and eventually moved into his childhood family farm,” she stated. 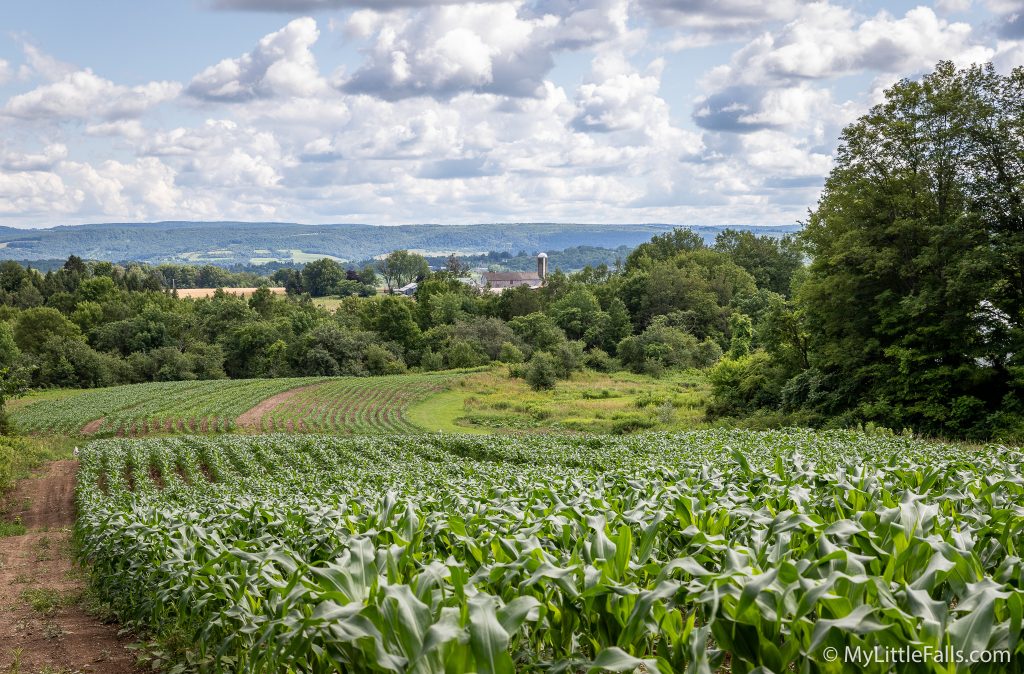 Photo by Dave Warner – The Burns farm corn fields have some of the best views in the Mohawk Valley.

Burnsy said, “Nobody was around, so I started running this farm in 1994.”

They were making hay on the farm, but also sweet corn, with the kids and his wife picking it each season. “I’ve done my share of corn picking, but not just that. We had an acre of a garden, and I pushed the lawnmower back then, kept the house, and raised four kids,” said Tom’s wife of almost 60 years, Janet.

Janet said that he reads all kinds of books to stay up on the trends in corn.

It started because a neighbor came over and suggested that they both start growing sweet corn. “I started out with Seneca Chief, which was the best corn ever in 1970, but then one came along called Silver Queen. That was a white corn, and that was the best corn ever. We grew that for like 20 years, and then all of a sudden, a couple of people came into my farm and said ‘you have to start growing Candy Store’, and that was a super sweet,” he said.

He said that the Candy Store didn’t have the longevity that he had been used to. “The old saying goes that you want to be picking corn while you’ve got the water boiling because once you pick it, you’ve got about one day before it turns to starch.”

All of a sudden, he said that the companies that make seed started making corn that had no starch in them whatsoever. “It’s all sugar with a shrunken kernel and when you put that in the ground, you only have one week for it to go. Every kernel of corn has to die, decay, and shoot the spout. If you don’t have the right weather conditions and 65-degree soil, it will fail. If it’s 64, I go.”

Burnsy says that he plants nine different times, one week apart each time. “You can’t just grow one crop and expect it to last six weeks,” he said.

The best part of growing corn, according to Burnsy is watching people eat it raw and then seeing the look in their eyes.

Janet said that there are different ways that people cook corn. “Some do a microwave type of deal, putting an ear of corn in with the husk on for a minute and a half and then turn it and do another minute and a half.” 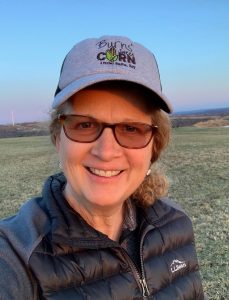 Burnsy said that he loves corn cooked in water. “One of the best ways to cook corn is to take cold water, turn the burner on full blast, put the corn in cold, and when it comes to a boil, take it out. Most people wait until the water boils, and then cook it for ten minutes. That’s too long. Five or six minutes is enough if you are boiling.”

He said that other people soak it in a bucket of water for three hours and then put it on the grill. “That’s a nice way to do it,” he said. “We don’t do it that way because we only eat a couple of ears a day.”

Burnsy said that Roger Morocco down the road used to eat eleven ears in one sitting. “I think he’s backed off a bit from that with his age, but he’s probably still good for eight or nine. That’s a lot of corn.”

Janet said, “There’s a lot of stories out there about how many people eat in one day.”

“Our objective is to keep the product as high quality as possible and sell it. We sold it last year for $6 per dozen and nobody complained about the price because of the quality,” he stated.

He said that back when there were no super sweets, you would start out at $3 per dozen and by the time it was a week after Labor Day, it would be down to 50 cents per dozen. “With super sweets though, they want that quality and they’re willing to pay for it right up until the 1st of October.”

Rumor has it, that Burnsy has even received a medal for his corn. It’s something you’ll have to ask him about next time you stop up for a visit.

Burnsy is going to be 84 this year, but he said that at this point, “I’m not going to be giving up planting corn. I’ve gotta go for it. I love to do it.”

Burnsy said that one of them is so good that he can pick 500 ears of corn in half an hour.

When asked how he knows when the corn is ready to be picked, he stated, “You just look at it and it speaks to you. It really does.”

His daughters stated that Burnsy’s passion for farming started at a very young age and that his passion for the business and life-long stewardship of the land is something to be admired. “Unfortunately, many family farms these days end up being sold and the land divided for profit and new construction. We hope that he’ll be able to live out the rest of his life on the farm, doing what he loves.”

You can find Burns Sweet Corn in the Co-Op in Little Falls, or you can make a trip out to the farm at 357 Cole Rd, Little Falls, and ‘chew the corn’ with Burnsy and buy a few dozen at the same time.

More information can be found at https://www.facebook.com/burnscornlittlefalls