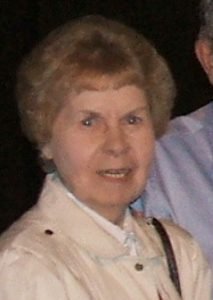 On July 2, 1950, Katy was united in marriage to Sam J. Caiola at the Lutheran Church in Herkimer, New York. The couple shared a union of 48 years where they raised their son, Robert in a loving home. Mr. Caiola passed away on December 14, 1998.

Katy was formerly employed as an Administrative Assistant with Daniel Green Shoe Company in Dolgeville, New York, retiring in 1954. She also spent the majority of her life as a dedicated homemaker.

She was of the Lutheran faith. Katy was an avid reader as well.

She was predeceased by her husband, Sam J. Caiola, a son, Robert J. Caiola, a brother, Oswald Kopp, and his wife, Marie, and a sister-in-law, Ruth Kopp.

Katy’s family would like to thank family friend, Sharon Thomas as well as all of her home healthcare givers for their care, support, and compassion throughout Katy’s life. They made it possible for her to live in the comfort of her home until her passing and her family will be forever grateful for all their dedication.

To leave a message of sympathy for the Caiola family, please visit www.robertsfuneralcare.com and sign the tribute wall.