Emma Dooley’s dad Jim kisses her on the head after Congressman Anthony Brindisi tells her she is the 2020 winner of the Congressional Art Competition, while her brother Ryan, and mom Leeann react.

The Congressional Art Competition is an annual event hosted by the House of Representatives, allowing high school students from across the country to showcase their artistic talents. The winning piece from each Congressional District is displayed in the U.S. Capitol for a full year. Due to the coronavirus outbreak, submissions were collected digitally.

“All of the submissions we received highlight the immense talent and creativity of the young people in our district,” Brindisi said. “The judges agreed that Emma’s piece shows passion and an artist’s eye that will serve her well in the future. It will be an honor to bring this piece to the hallowed halls of Congress for lawmakers and visitors to see.”

“The range and depth of these artists’ responses to current events and classic prompts is inspiring evidence of the deep resources of creativity that New York-22 has in its youth population, which was very inspiring,” said Kristina Boylan, a SUNY Poly professor and judge for the competition. “Congratulations to the winners and much appreciation to all the artists who contributed their work.”

Brindisi said that the Congressional Institute is working on a plan to fly the winner and a guest down to Washington D.C. in September for a reception with other winners, that will follow CDC guidelines.

He stated, “Your art will be seen by every member of Congress, every day.”

While listening to the names of the winners being announced, Emma stated, “the suspense is real!”

When her name was announced, there were tears and smiles and her mom Leeann stated, “I’m so proud of you!”

Her art teacher Kara Milianta called immediately after the announcement and said, “can you believe it? Awesome job…I am so proud of you. I wish I could be your plus one to go down to D.C.”

Milianta went on to say, “she is so bright and so talented! She is one of the most thoughtful, hardest working students I have ever had.”

Emma stated, “it’s actually me in the picture, my silhouette. We took a light and we flashed it and then traced it, and then I painted over it. I named it Quaranteen because it’s supposed to represent teens in this crazy time, which is why it’s so chaotic with all the different colors and lines coming in. I was trying to show what’s going on in our heads because it’s so new and different.” 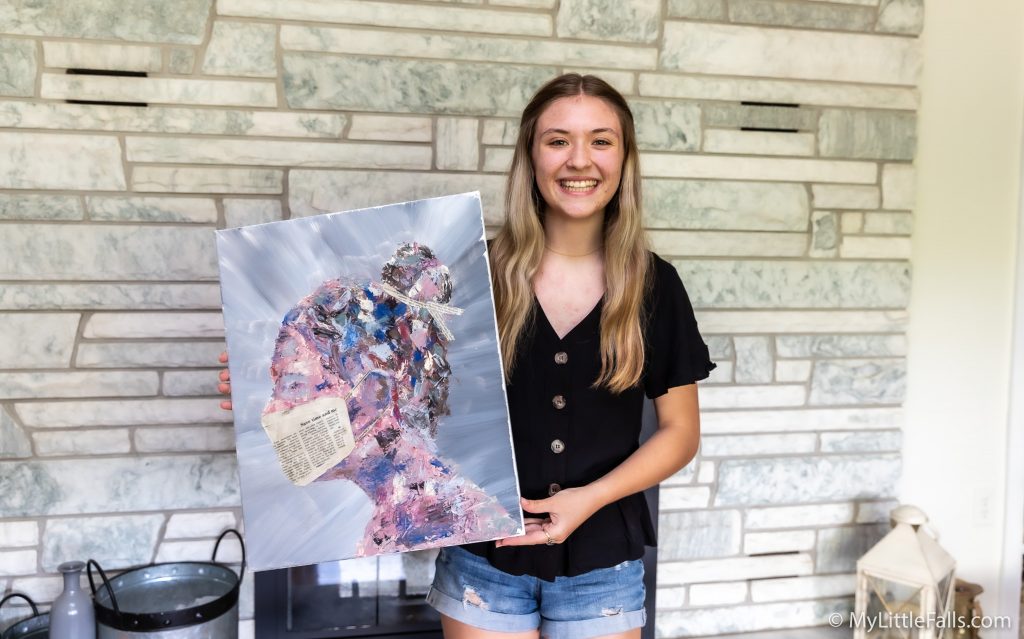 Photo by Dave Warner – Emma Dooley holds her artwork after hearing that she had won the 2020 Congressional Art Competition.