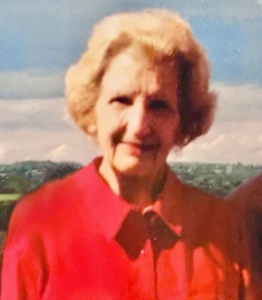 She was born on March 14, 1930, in Little Falls, the daughter of the late Albert Dupont Sr. and Milley Holdridge Mosher. She attended St. Mary’s Academy, graduating with the “Class of 1948.” She was also a graduate of Rider College, Trenton, New Jersey, with the “Class of 1952.” Margaret was united in marriage on August 25, 1951, with the late Walter M. Hodge Sr. in St. Patrick’s Church, St. Johnsville, New York, by the late Rev. Michael T. Scully. Along with her husband, they owned and operated Walt’s Sports Shop in Little Falls for 27 years, retiring in 1989. She was a member of Holy Family Parish.

Margaret was a loving and devoted mother, grandmother, and great-grandmother who will be dearly missed by her family.

She is survived by her children, John Hodge of Little Falls, Karen Hodge-Ehlinger of Little Falls, and Barbara (Rodney) Futrell of Choctaw, OK; her grandchildren, Adam Ehlinger, Danielle Flandreau, Dennis (Katie) Ehlinger, Emily Futrell, and Eric (Allison) Futrell. She is also survived by great-grandchildren Wesley and Chase Ehlinger, Penelope and Audrey Flandreau, and Hallie Futrell. Besides her parents and husband, she was preceded in death by her brother, Albert Dupont Jr., two sons, Gary Hodge and Walter Hodge Jr., and a grandson, William Hodge.

Burial will take place in the family plot at St. Mary’s Cemetery, Town of Herkimer, at the convenience of the family. There are no calling hours. Funeral arrangements are under the direction and care of Mohawk Valley Funerals and Cremations, 7507 State Route 5 (corner of Bidleman Road), Little Falls, NY, 315-508-5131. The family will say their final goodbyes privately at the funeral home. To offer an online note of condolence for the Hodge family, please visit www.mohawkvalleyfunerals.com on the Internet.