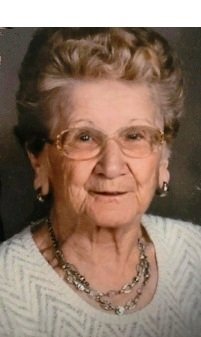 LITTLE FALLS – Mrs. Mary Bronson, age 96, who resided on Loomis Street, in Little Falls, New York for many years, passed away with her loving family at her side on Monday evening, January 11, 2021, at The Grand in Ilion.

She was born on February 28, 1924, in Emmonsburg, New York, a daughter of the late George and Pauleen (DeVost) Adamko, and was educated in Stratford schools.

Her marriage to Cecil C. Bronson took place on April 11, 1942, at Holy Trinity Lutheran Church when it was located on Jefferson Street in Little Falls. Their marriage nearly spanned 80 years together, a true love story. Her beloved husband passed away on December 12, 2020.

Mary worked with P & K Dress Factory, Little Falls, for 25 years. She retired in 1986. She was a devoted member of the Holy Family Parish Church, having been a past president of the Rosary Society and carried memberships with the Little Falls VFW Auxiliary, and the AARP.

Funeral services will be held on Tuesday, January 19, 2021, at 11:00 AM, at the Holy Family Parish Church, corner of East Main & John Streets, in Little Falls, where her Mass of Christian Burial will be celebrated by Father Brian Slezak, Pastor. Spring interment with full military honors will take place in Church Street Cemetery, Little Falls, with her husband, Cecil. A calling hour (FOR FAMILY ONLY) will be held at the Enea Family Funeral Home, 24 West Monroe Street, Little Falls, NY. If you plan to attend the calling hour or funeral services, a face mask will be required. Thank you.

The family would like to thank the staff at the Grand, Ilion, for their compassionate care.

There is an online memorial page created at www.eneafamily.com on the Internet.