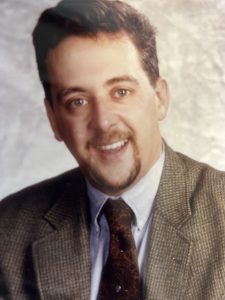 Michael Thomas Guidice, who resided on West Monroe Street, Little Falls, New York, passed away on Monday morning, April 4, 2022, at home, surrounded by his friends and loved ones.

Michael was born October 10, 1961, in Oneonta, New York. He graduated from Franklin Central School where he was very involved behind the scenes of the Drama Club and played a large role in taking and developing pictures for the school yearbook. Michael began the tradition at Franklin Central School by creating and sharing memorable slideshows of the Graduating Seniors that are still utilized to create lasting memories for all students and their families. Michael spent his summers lifeguarding at the Franklin town pool where he saved money for his first Canon camera that began his lifetime passion for photography.

He earned his degree in Radio, and TV broadcasting at Herkimer Community College. His many accomplishments as a student there led to a lifetime career at the college. Among Michael’s accomplishments, he began maximizing the campus theatre. Michael engaged the students in productions of plays, musicals, lectures, films, and eventually concerts with nationally known performers. Among his many talents, Michael also had expertise in technical areas such as production, lighting, and projection, as well as a skill for highlighting his students’ strengths with a hands-on approach. His incredible knowledge of music led Michael to create the college Radio Station still known today as WVHC. Michael originated this student-powered radio station that still to this day, highlights jazz and the blues. Michael was known for his dedication and support to his students which led to many of their careers in radio and television, both on-air and behind the scenes.

Michael volunteered and helped organize many fundraisers and galleries which highlight his hobbies and passions. Among these are his involvement with Mohawk Valley Center for Arts in Little Falls as well as the Oneonta Theatre. His love for film even included learning and operating projection equipment that still remains in his home today. Michael’s many other interests include cooking, genealogy, collecting vinyl records and jukeboxes as well as collecting and restoring antiques including record players.

He is survived by his life partner Tim Rieman, who remained by his side through his finals days; close friends, Dan Keating and Scott Dennis; his Mother, Mary Guidice; sister Linda Hotaling (Allen); niece Stephanie Shaw; and nephew Mark Rathbun.  Michael was preceded in death by his father, Nicholas Guidice.  At his request, no service will be held.  In lieu of flowers, donations may be made to Hospice & Palliative Care, 4277 Middle Settlement Rd., New Hartford, NY 13413.

Michael’s funeral arrangements are under the direction and care of Mohawk Valley Funerals and Cremations, 7507 State Route 5, between Little Falls and St. Johnsville, 315-508-5131. Please visit www.mohawkvalleyfunerals.com to add to his online memorial.