My Little Falls adds new podcast to its lineup

Michele Hummel, Executive Director of the Herkimer County Chamber of Commerce sets up in the studio for her first podcast.

‘Hello Herkimer County‘ is a bi-monthly show from the Chamber, hosted by Executive Director Michele Hummel. Twice a month she talks about area issues, interviews the people in the know, and trys to keep you informed on what is happening in the County.

What is a podcast? Well, the idea has morphed significantly from its beginning. Initially, a podcast was a collection or series of audio files that were made available for downloading or listening via the Internet. Each individual audio recording was known as a podcast episode, and typically had one or more hosts that guided the conversation.

Today, the term has morphed a bit with podcast being used to describe an audio program, that may contain video AND be streamed live on many different platforms.

A podcast can have many purposes, but the main one is to entertain its audience. Podcast listeners might have one of several reasons to subscribe to a podcast, such as listening to current events, hearing about a new topic or industry, or finding out more about their favorite sports team.

Hummel stated, “This is something that I’ve been thinking about for quite a while. I just didn’t know how to get it done to be quite honest.”

She first went on another podcast produced by My Little Falls, called ‘Tiffany Talk‘. Hummel was a guest on the show because Tiffany Rutkowski, the host, had just joined the Chamber and had a ribbon-cutting for her new facility in Dolgeville.

“I really enjoyed it. Tiffany was great, and so were you. I found out that I wasn’t afraid to speak. I was nervous that I wouldn’t have anything to talk about and I realized that it was just so casual and easy to do. You had all of the means right there. The room was all set up and ready to go and all we needed to do was come in and provide some content,” she stated.

Hummel figured out that she could do her own show and that the Chamber should be involved. “I want to keep the show on current topics. I want to stay away from politics, but dispel rumors that are going around about economic development. Once you see some construction, you see everyone on social media and in public hypothesizing about what is going in.”

“I think there hasn’t been a really good way to spread the word of what’s going on. There’s less media here than there was at one point, so if our podcast can be a place for people to turn to to dispel rumors or to find out good news like jobs are coming or things of that nature, I feel good about it,” she stated. 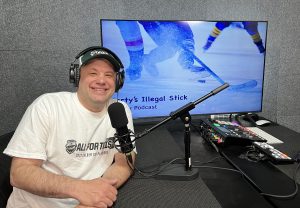 Scott Kinville has been doing a show on Mohawk Valley hockey called ‘Marty’s Illegal Stick‘ for two seasons now, and his show has become extremely popular.

“There are a ton of hockey podcasts out there, but to differentiate ourselves, I spotlight local hockey players in the Mohawk Valley and people that have connections to the NHL. That’s our thing,” he stated.

Rob Drumm also does a podcast called ‘Sportsbeat with Rob Drumm‘. He said, “I needed a hobby kind of thing, and I don’t mind having conversations with people. I know enough people in the sports community I think to at least put together some kind of show, so I thought, why not give it a shot.”

He says that he works on getting local coaches on the show, amazing athletes, and the player that they’re doing a Go-Fund-Me for. “We’re a community here and from field hockey, bowling, football, to baseball, soccer, and even badminton, we intend to cover it.” 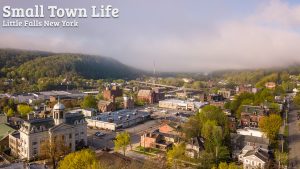 Finally, My Little Falls has started producing its own show with Dave Warner as host, called ‘Small Town Life’. The idea is to gather up some of the interesting people in the area and find out what they are up to.

The first full show will air on Tuesday, May 17, 2022. It features Lynne Haynes, who hails from the Aspen Colorado area. She has fallen in love with Little Falls and has come up with a unique idea about how to better connect the Empire State Trail to the City.

Many of the different shows are now going to a ‘live’ format where they can be viewed on Facebook, Twitter, Twitch TV, YouTube, and others. Once live, you can interact via live chat, or even call into a show if a number is provided.

If you want to find and subscribe to the shows that are being produced by My Little Falls, search your favorite podcasting platform for ‘My Little Falls’, or visit our YouTube or Twitch TV channel and subscribe. You can also visit our Radio/Podcast page on the website and find a list of shows there.

If you have been thinking about doing your own podcast, but don’t know how to begin, email dave@mylittlefalls.com. There’s no cost involved for doing a show, and you can get a tour of the studio.