Not a vacation trip

Photo provided by Dan Enea – Local resident Dan Enea, right, takes his place with other American Red Cross volunteers at the disaster response center in Boulder County as they prepare to meet with and assist Colorado residents who were evacuated during the Marshall Fire.

On Dec. 31, when most area residents were getting ready to celebrate the New Year, Dan Enea was preparing for a trip to Colorado.

It wasn’t a vacation trip.

Enea, who, in addition to being the owner of Mohawk Valley Funerals & Cremations on State Route 5, Little Falls, serves as disaster program manager for Territory 3 of the American Red Cross’s Eastern New York Region, was going to help with the organization’s efforts to assist victims of the Colorado wildfires.

He had thought he’d be heading for Kentucky to assist victims of the tornadoes that had torn through that state, “but they switched me to Colorado.”

Enea initially wondered what was going on in Colorado. Then he turned on the news and saw the footage of the wildfires that were forcing thousands of people to flee their homes.

He flew to Colorado, where he spent the first two weeks of 2022. He was initially assigned to help provide shelter for evacuees, but most had someplace to stay, so the shelters were closed. Enea spent most of his deployment in the Red Cross disaster response center in Lafayette, Colorado, in Boulder County. Red Cross volunteers set up tables and computers and began welcoming those impacted by the fire. The center was prepared to offer spiritual and mental support as well as financial assistance, he said.

The Salvation Army and local United Way were also on hand to assist and the county’s Department of Motor Vehicles and tax department stationed representatives in the space to help residents replace documents they had lost to the fast-moving fire. 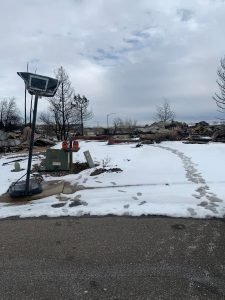 Photo provided by Dan Enea – The Marshall Fire destroyed nearly 1,000 homes and burned some 6,000 acres. Homes were reduced to ashes, but a basketball pole and hoop remained standing on this property.

“The first day was pretty quiet, but we were busy once people knew we were there,” said Enea.

While this wasn’t the first time he had been deployed to assist at a disaster – he was a team member and team leader for Kenyon International Emergency Services, assisting with rescue and recovery efforts in New Orleans in 2005, in Haiti after the 2010 earthquake – this one had a different feel.

Instead of working in an area where many residents had limited financial means, Enea was assisting people who “had beautiful homes and had built a nice life” and suddenly lost everything they owned.

“Some said they donated to the Red Cross in the past and can’t believe they’re here asking for help,” he recalled.

Enea heard stories from people who had looked out their windows to see thick smoke from the wind-driven fire all around. “They had no warning. They just picked up and left.”

He and other volunteers listened and checked to determine what financial assistance each household could receive from the Red Cross. The goal was to get people back on their feet again so they could explore their options and move forward.

In a Jan. 4 Facebook post, he wrote, “Red Crossers from all over the states have gathered in Colorado to offer comfort and assistance to those hurting. Just today, we provided assistance to hundreds at Boulder County HQ. Nature’s worst brings out the best in our fellow human beings, that’s for sure. Let’s continue to pray for Colorado and all displaced from any disaster, along [with] those who want to help make this world a better place.”

On a day off, Enea had the opportunity to go out and see some of the impact of the fires firsthand. Houses had been destroyed. In one case a basketball pole and hoop stood next to a pile of ashes where a house had once stood.

The Marshall Fire, which was described as Colorado’s most destructive wildfire in history, burned more than 6,000 acres, destroyed nearly 1,000 homes, and forced the evacuation of some 35,000 people, according to the Red Cross. 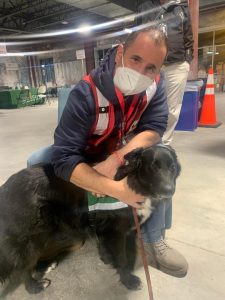 Photo provided by Dan Enea – Dan Enea says goodbye to one of the two therapy dogs that were brought in to support volunteers throughout their deployment.

“They had quite a time putting out that fire,” said Enea. “Finally some snow came and that helped put out the fires.”

He received a nice surprise when a group of former Little Falls residents who now live in Colorado contacted him as a result of his Facebook postings and took him out to dinner. The Miller and Mocko families live north of the area directly impacted by the fires, he said and added that the invitation was typical of people from Little Falls and Herkimer County.

Much of his time was spent with other Red Cross volunteers with whom he worked and was housed. “It’s a great group. I’ve met some of my closest, best friends during deployments,” he said.
By the time he left Colorado, the Red Cross had assisted 85% of the victims of the Marshall Fire, he said. “I was sad to be leaving. You don’t want to leave when there’s still work to be done.” The deployment was for two weeks, however, and there is a debriefing session before volunteers return home.

Enea said he enjoys responding to these events and each deployment is different. “I get personal satisfaction from helping people,” he said. The fact that he is single with no children gives him the freedom to travel when called. He added that he also has people who work with him who can take over at the funeral home and make sure families receive the same level of service and compassionate care they would if he were there.

“You need the right people in place,” he said, adding. “I made sure I was in contact with the families.” 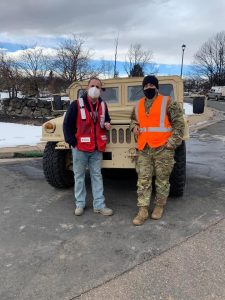 Photo provided by Dan Enea – Response to the Colorado wildfire included military personnel. Here, Enea, left, is shown with a military jeep and one of the members sent to assist.

Enea has a long history of responding to disasters. He was a team member and team leader for Kenyon International Services from 2005 to 2021 and was involved with the COVID-19 response in 2020.

He has been a volunteer with the Red Cross since 2018 when he was deployed to North Carolina for two weeks to assess damages after Hurricane Florence struck the area in September of that year. Last year, he agreed to take on the role of disaster program manager for Territory 3 in the Eastern New York Region.

“It’s a great organization,” he said. “I don’t think people realize what they do.”

Volunteers are always needed, Enea said. Anyone interested in volunteering or learning more is encouraged to call 1-800-733-2767.

The Red Cross provided financial assistance to nearly 1,600 people impacted by the Marshall Fire, distributed relief items and provided more than 1,500 individual care contacts to help with medical or disability needs, and provided emotional and spiritual support, as well as working with government agencies, community groups, and others to coordinate emergency relief and recovery efforts. The financial support is intended to be a bridge to cover emergency needs until survivors can access other resources, such as insurance, community services, or other forms of federal disaster assistance, according to a statement issued by the Red Cross.