Nothing to do during the Canal Celebration? Try ‘The Southside Death March’

For the past several years, Gary Staffo has headed back to Little Falls during the Canal Celebration to conduct a history and storytelling tour “Growing Up on The Southside 1957 – 1970.” The tour covers 3.5 to 4.5 miles of moderate to vigorous physical activity, including unpaved dirt paths, uneven surfaces, climbing up and down open stair gratings at heights, and other challenges, which has earned it the nickname “The Southside Death March.”

And yes, there’s a t-shirt for that. Staffo said “This started because I told stories when I was away in college and people who were not from Little Falls were just kind of amazed. I come from a family of storytellers – Italian on my father’s side and Slovenian. So we grew up with this and we picked it up.”

When Staffo came home from college, his friends were also interested in those stories. “The amazing thing is that when this idea came up, it was primarily because people said ‘you really did this stuff?’ And I said yeah.”

He says that it’s a great opportunity to share those experiences and to let people know why the Southside is such a special place. “I’ve been doing this for six years now and the good news is that I didn’t know anything about giving a tour, so initially I thought I’d have to do everything myself. However, the great news is that my tour is different every year because I only have to start something and more Southsiders are joining in and adding their own stories.” 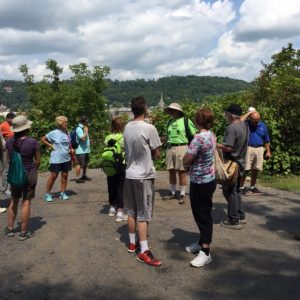 Staffo says that he is learning things about the Southside that he never knew before on his own tours. “The best compliment that I received I think is from the wife of another person I knew from my class in Little Falls who attended and she said ‘this is the best experience because know I understand the way you are.”

He says that there are a lot of laughs on the tour, but some seriousness as well as he tries to make it entertaining, yet contain historical information as well. “It’s hard to believe that my period of youth is in many ways the same for each generation after that, but there are aspects that have disappeared.  People are really nostalgic about that.”

The biggest lesson that he has learned is that when he first put it together, he didn’t realize that the tour goes only as fast as the slowest person or the last person in the group. “That’s part of the reason my tour has been renamed by one of my best friends as The Southside Death March,” he said.

“I try to make it memorable and enjoyable so that people will recognize the value of these stories and how they relate to the Little Falls Historical Society,” said Staffo.

For a long period of time, Staffo said the Southside felt like one continuous family. A different era where everyone looked out for each other. “A lot of my stories are based upon that fact.”

“My mother could make four or five phone calls and people could see you. We spent almost all of our days trying to find places to hide. It’s why we built forts, it’s why we went down to the railroad tracks to hide, it’s why we spent time at Beckers junkyard, hidden in cars and smoking during the winter,” he said.

Staffo said that kids lived day to day outdoors, everybody looked out for everyone else, and the primary time we went home was to eat. “Our activities were centered around that and this one big family.”

“It was nice to get away and the fact is, that’s part of my story. We couldn’t wait to get out of Little Falls and it took those years of college and being in the outside world to understand how precious those years of growing up on the Southside were,” said Staffo. “Everybody cared about each other and we created lifelong friendships.”