On the Prowl for an Owl 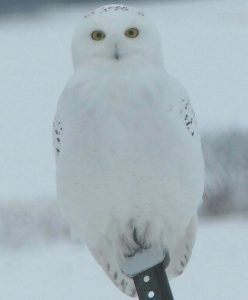 I am often asked when and where to look for a certain species of owls. There are several websites that track the arrival of migrating owls, especially those that winter over in our area that are from the Arctic regions. You can make an inquiry on your favorite search engine as to whether Great Gray Owls or Snowy Owls are being observed in nearby locations. Also, Audubon, Cornell Merlin App, and Snowy Owl Alert eBird are a few of the ones I use throughout the winter season. In addition to the Great Gray or the Snowy owls, there is always a possibility of seeing a Short-eared or a Long-eared owl in our area too. The tiny Northern Saw-whet Owl leaves for the winter and it migrates from our area, but it will return in early spring. What we are most apt to see year-round in our area are the Great Horned Owl, the Eastern Screech-owl (both gray and red morphs), and the Barred Owl.

Most owls are crepuscular hunters, which means that their hunting time is most often at dusk and dawn; and the prey that it seeks are most active during those hours. Owls can see as well as we can in daylight and a least a hundred times better in dim light. Most birds’ eyes are positioned on the side of their head while the owl’s large eyes are positioned on the front of their face. This eye placement gives a great advantage as it allows the owl to have an overlapping field of view and much greater perception. Their eyes are immobile, however, to see from side to side is not a problem because their head can rotate two hundred and seventy degrees in both directions. The extra vertebra in their neck permits this unusual neck rotation. Owls also have astounding hearing. Their ears are positioned asymmetrically on their head. One ear is positioned higher than the other ear, and they have flattened facial disks which also reflect sound. I actually had an occasion to watch a snowy owl as it became alert to the sound of a vole moving under the snow. It triangulated the prey’s position and flew to the spot, and then dropped down and reached into the snow with its feet and grasped the prey in its talons. Its flight was soundless because of its velvety feathers which absorbed the sound and its serrated primary feathers also muffled sound as its wings passed through the air.  Even its legs and feet and are feathered and it has a movable outer toe that keeps wiggly prey from escaping its grip.

Once the snowy owl returned to its perch, on the top of a telephone pole, I watched as it ingested the vole by swallowing it whole. Owls have a stomach that has two chambers instead of a crop like most birds. The prey first goes into a chamber of the stomach known as the proventriculus, which produces acids, enzymes, and mucus that begin the first stage of digestion. The acids in the proventriculus are weak and only digest the soft tissue of the prey. Digestion continues in the second chamber known as the ventriculus of the gizzard. The gizzard works like a filter and keeps the hair, fur, feathers, bones, and teeth, all the indigestible parts, and compresses them into a pellet that is the same shape as the gizzard. The prey’s hair forms the compact pellet surrounding the bones and other sharp parts so when the owl regurgitates it (coughs it up) it own organs will not be damaged by jagged or pointed edges. The more that you learn about an owl’s habits and habitat the more likely you will be to observe and or photograph them.

In our area, great horned owls begin their courtship in mid to late December with loud hoots nightly for about four to six weeks. After courting and mating the female will select a nest. She doesn’t make her own nest but will select a previously used nest of a hawk, eagle, or even a great blue heron. Once she has laid her eggs she will remain in the nest incubating them and the male great horned owl will bring her food. If the prey is small she will swallow it whole. If it is large she will eat what she needs and cache the leftovers. The leftovers will probably freeze, but then she will sit on the remains to thaw them out when she is ready to consume them. The great horned owl has enormous talons and can seize very large prey which may include a rabbit, skunk, opossum, muskrat, and even a gray fox.

I had an opportunity a few years ago to spend time observing and photographing an immature great horned owlet. A friend had called me concerned about an owlet that had been found on the ground. I went to see if it may be injured and had the phone number of a wildlife rehabilitator if it was necessary. Many birds that are found on the ground in late spring may have been pushed from the nest or are in the process of fledging. The great horned owlet wasn’t injured and I could hear blue jays and crows scolding nearby. The birds will mob or scold when they see a predator in their territory. I assumed the predator was probably the adult great horned owls watching the owlet from a nearby tree. The owlet’s talons were enormous and it was big enough to easily defend itself. If a predator approached, it would lie on its back with the large talons extended and use them and its snapping beak to fend off an attack. Owlets also have the ability to climb a tree back into their nest. They grasp the tree bark with its talons and with outstretched wings they use a hopping motion to travel up the tree trunk. Owls have unique feet. Passerine (perching birds) like chickadees have three toes pointing forward and one toe pointing backward. Owls have four toes, two pointing forward and one toe pointing backward, the fourth toe is reversible. Their talons are very large, curved, and have very sharp nails. Owlets grow rapidly and may gain as much as an ounce a day. They are able to fly within seven weeks.

Step outside any cold, clear night and perhaps you will hear the mating hoots of a great horned owl and check the websites for the migrating arctic owls.