It’s not often that someone comes to Little Falls to make an attempt at a Guinness World Record, but that’s just what two ‘foodies’ are going to try to do at Veterans Memorial Field on September 19, 2021.

The event had originally been scheduled for last month on the 13th, but the Coronavirus restrictions killed that opportunity.

Preston Moore and Mike Cassella hail from Herkimer but have set their sites on Little Falls for pulling off a World Record Charcuterie.

Charcuterie (pronounced “shahr-ku-tuh-ree”) is the art of preparing and assembling cured meats and other meat products. But, many people use the term charcuterie to refer to an assortment of meats that are paired with different accompaniments, such as toast, fruit, cheese, and sauces.

The word originated in France, and it translates to a “pork-butcher shop.” While the original French translation refers to pork, modern charcuterie boards can include other types of food, such as duck, goose, chicken, cheese, toast, fruit, or other options.

Moore, who grew up in what he calls no-mans-land between Little Falls, Herkimer, and Middleville said that both he and Mike love Little Falls, and that’s why they chose the City for their record attempt. “Both of us have said that if we were to move back to the Valley, that it would be to Little Falls.”

“We like the feel of the City and the fact that you have a lot going on there in Little Falls and we like that,” he said.

Moore is a Chief Information Officer for a charter school in Albany (and is 42 years old), while Cassella sells insurance to businesses (and is 45 years old).

The pair grew up as friends in Herkimer and have always had an interest in food. Moore said, “My family is Polish and we grew up around all those kinds of foods, and Mike’s Italian and he has the connection to the real old-world Italian food. A lot of his relatives are immigrants.”

He says that’s kind of the reason they came up with the idea for the 315 Foodies group on Facebook. Both of them loved food and they believed that there was a rich heritage of food and cooking in the Mohawk Valley.

Moore says that he lived in Tennessee for ten years and that Cassella has been all over the world as well, and he says the food wasn’t the same. “We talk to people out here about Albany food and they mention those little mini hotdogs. There’s nothing out there that they can really talk about.”

But, when you mention Utica, “It’s chicken riggies, greens, tomato pie, half-moons and things like that. The staples,” he stated.

He said that they would get together regularly to talk and they’d throw a bunch of food together. Usually cold cuts, cheese, crackers and things like that. “We’d joke around and call it bar foodery. The whole idea was to be creative and not have to have this perfect plate. That’s how we got into the Charcuterie stuff.”

315 Foodies got started because they were members of a food group out of Albany and Moore said that it seemed to be the same reviews about the same places. “It just got boring, and with so many people, we just wanted to see what people were cooking and I asked if anyone ever shared those stories.”

“People got really offended by that and we kind of got into what a foodie really was. A foodie to me was somebody who was into food in general, not just reviewing restaurants,” he said.

Out of the disagreement with the Albany group, the 315 Foodies were born. “That happened on November 6th and on November 15th I got a notification on Facebook that Mike had created 315 Foodies and that I was an administrator, so that’s how it all got started,” stated Moore.

“It kind of stuck and I think we hit something.” The group now boasts over 11,500 members. “The niche that we have is the 315. There are all kinds of other foodie sites out there, but it’s that pride in the 315 area, even though I don’t think Watertown is killing it with Italian food,” said Moore.

He says that people in this area take pride in what they make and how long it takes to create it. “Everyone’s always taking pictures of what they’ve made, so we’re just scooping all that up and putting it in one spot.”

The Facebook group has been so successful, that they’ve created a company around it called Upstate VIP, LLC, and 315 Foodies is a division of the company. As soon as COVID rules allow it, they’re going to have some big events scheduled throughout the year. 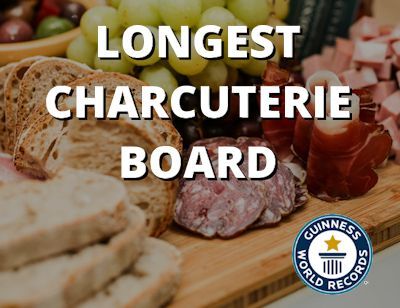 Moore said that he’s not much of a reader, but the kind of books he did get into when he was growing up were The Guinness Book of Records, baseball stats books, and others. “The Guinness is always something that I’ve been interested in and I was trying to figure out something that would build excitement about the group and give us momentum.”

He looked at the current record and thought that they could crush it, so he asked around if there were folks that could help them accomplish it. “The idea gained some real steam, so I put our application in, and they got back to us in four weeks and approved it,” he stated.

They will spend the whole day before the event setting up. “According to Guinness, it has to be a scaled-up model of a Charcuterie board that is available commercially.” Then they will have tents, bounce houses, and other things going on at the park.

Moore says that they already have a lot of volunteers signed up to help. “I picture the day as one where there is a lot going on and there are a lot of people at Vets Field. We have 150 members that are taking part in building the board, plus 50 restaurants with all of their stands, and all the restaurants are welcome to set up a booth.”

“I want it to look like a festival, but it’s mainly going to be about eating and the board,” he said.