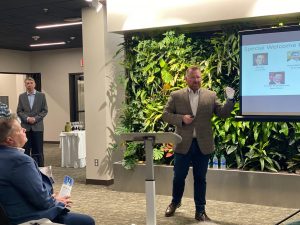 Dunn began by giving some background about the organization.  Unite NY is not a political party, but a non-partisan movement of Democrats, Republicans, and Independents.  Their slogan is “People Over Party” and they believe that by working together we can foster a more representative and functional government and ultimately bring about more positive change to New York State.

What do all these facts mean?  That only a tiny fraction of voters decides who should run New York State, unlike the other 41 states that have a version of an open primary.

Unite NY proposes that Democratic and Republican parties open up their primaries to unaffiliated voters (i.e. the other 3.5 million people who currently can’t vote in the primary elections).

Arguably, wouldn’t this allow better, stronger candidates to actually make it through a primary and onto the ballot for Election Day?

Interestingly enough, that’s exactly how the recent poll was done by internationally acclaimed (and Utica) based Zogby Strategies suggests NYS residents are feeling.

John Zogby and his son Jeremy presented the results of the recent Zogby Strategies.  The poll asked about open primaries as a solution to the state’s dysfunctional political system- here’s how they replied.

Zogby added, “As sick and dysfunctional as people think this system is, they are not throwing the baby out with the bathwater.  There is still a sense that this can change and be reformed for the better.  As a pollster, I take encouragement from that.” 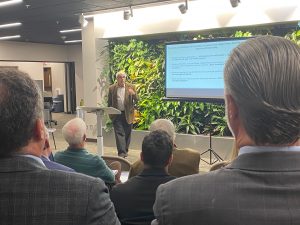 The poll was given to 1,505 likely voters in the state of NY, commissioned by Unite NY in September of 2021 with only a +/-2.6 percentage margin of sampling error.  It was really interesting to hear Zogby explain the methodology in detail.  The poll included an inclusive and comparable makeup of voters from NYC, Suburban NY, and Upstate. 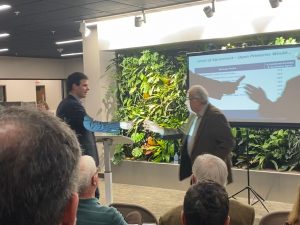 John Zogby, in his light and meaningful way, made an important announcement about the future of their company.  Zogby said “One more thing regarding the future, we Zogby’s are making a transition.  I couldn’t be prouder, that Jeremy is taking over much of the business and I am welcoming the opportunity to be the old guy who merely has to do the thumbs up and thumbs down.”

The crowd’s engagement level was demonstrated with many strong follow-up questions to the Zogbys’ presentation.

Martin Babinec said, “I am really excited.  We had an incredible turnout tonight with a sellout performance.  What’s exciting for me is the enthusiasm that people have for understanding the depth of the problem and to help bring about some change.   Too often, in NYS, we as citizens feel that if the government is not meeting our needs, that there is nothing we can do about it.  And the idea that our system of how we do elections is what ultimately determines who are the people in the legislature and our executive offices, it’s our election process that determines how our laws are done.  Citizens think there’s nothing we can do, but in fact, there are things we can do.  Because all politics is local.”

If you are interested in learning more about Unite NY, how to become involved or how you can make a difference, you can visit their website at https://UniteNY.org

Rock City Centre is the new building located across from City Hall in Little Falls.  It is a community co-working office space with a tiered membership model for small teams, remote professionals, freelancers, and corporate/community organizations.   Members can utilize the different workspaces on-demand, (much like a gym membership).  You can learn more at www.RockCityCentre.com 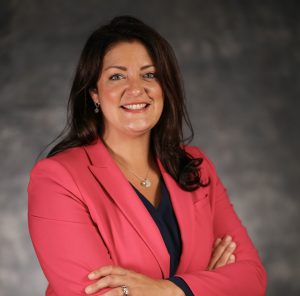