Robotham selected as Elk of the Year 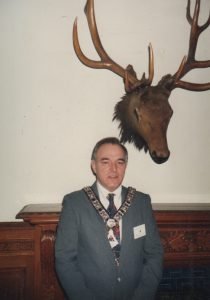 Photo submitted – Jim Robotham while he was Exalted Ruler.

Jim Robotham has been selected as Elk of the Year for 2022 by the Little Falls Elks Lodge No. 42. There is going to be a ceremony honoring Robotham on May 7th at the Lodge, with cocktails starting at 6, and a family-style dinner at 7.

Robotham is originally from Ilion and went to school there, but spent most of his time in Dolgeville, and owned Arthurs Restaurant on Main Street for 31 of those years.

He joined the Elks because “Two guys talked me into it. I was in three to four years after that and went into the chairs, and I was Exalted Ruler two years in a row.”

The Exalted Ruler, also known as the E.R., is the President and Executive Officer of the Lodge. The E.R. is responsible for all operations, programs, and social quarter activities of the Lodge and presides at each Lodge session.

Robotham said that the most exciting thing he’s done as an Elk is going to three conventions. One in California, one in Chicago, and one in the Catskills. “It’s where everybody meets and as an Exalted Ruler, you bring your own Lodge’s materials into your hospitality room and talk about your group.”

“The Little Falls Elks Lodge is really known for their chicken BBQ during Canal Celebration. We do around 500 chickens and 300 rib dinners,” he said. “We start at noon and usually sell out by 3 or 4 o’clock.”

He said that the Elks started growing once they began accepting women into the group. “We had never had that. We’ve had some super buildup from that.”

Robotham said that one of his friends asked him how he knew so many people. “Well, I had the bar and restaurant in Dolgeville and I belong to the Elks, the VFW, and the American Legion. You meet all kinds of people.”

One of his friends in Dolgeville wanted to join, but couldn’t drive, so Robotham made sure that he had a ride each time. “I used to pick him up and bring him down. You just have to bring members in, and when you get in the chairs, you have to stay in the line.”

When asked about how he felt about the award he stated, “I feel good about it. I really do.”

Tickets can be purchased Wednesday – Saturday for the dinner.