Rotary has full weekend of work

Members of the Little Falls Rotary Club work on restoring a floating dock.

Members of the Little Falls Rotary were busy on Saturday with two big projects. The first one was repairing floating docks that are normally at the entrance to the Mohawk River at the end of Industrial Boulevard, and the second was painting a room at the Marina and getting it ready for a historical display of the water-based activity in Little Falls.

Mike Potter a member of the Harbor Commission had approached Rotary to ask them if they would be interested in repairing the docks. Mike Evans, President of the group said, “I went down and looked and told him we could do that. The sign down there said that Rotary had originally provided them,” and Evans said the group didn’t even know it.

There are two sets of the docks, and the City had already repaired one set a few years ago.

Evans said that the City kicked in a little money, along with Rotary and that they think they’ll be finished with the project within a week.

Over at the Marina, another group of Rotarians was getting a room cleaned up and painted for a display they intend to hang soon. Allison Maricle said, “We’re doing a project for the Marina in Little Falls to highlight the history of the Little Falls canals starting with the carry which was a portage, before the canals.”

A portage or portaging is the practice of carrying watercraft or cargo over land, either around an obstacle in a river or between two bodies of water.

She said that the Mohawk Indians used that process long before the canals existed.

“There was a lot of controversy surrounding the Erie Canal when it was going in, so the state had to step in and fund it,” she said.

In the backroom that the Rotarians are cleaning up, they are going to hang banners on the wall depicting that history and more modern imagery.

“We’re going to start from the ice age and the formation of the rocks in the Mohawk River and continue through the history of the canals through Little Falls,” said Maricle.

She said it’s the perfect spot for the display because of the number of boaters and cyclists that come through the building. “It’s always nice to show them what the Rotary Club has done to the front of the building to make this into a great stop for people.”

The Marina building is over 100 years old and was originally used for cargo coming in and out of the City. “The barges would come in, offload on one side, and material would come in locally from the street side,” she stated. 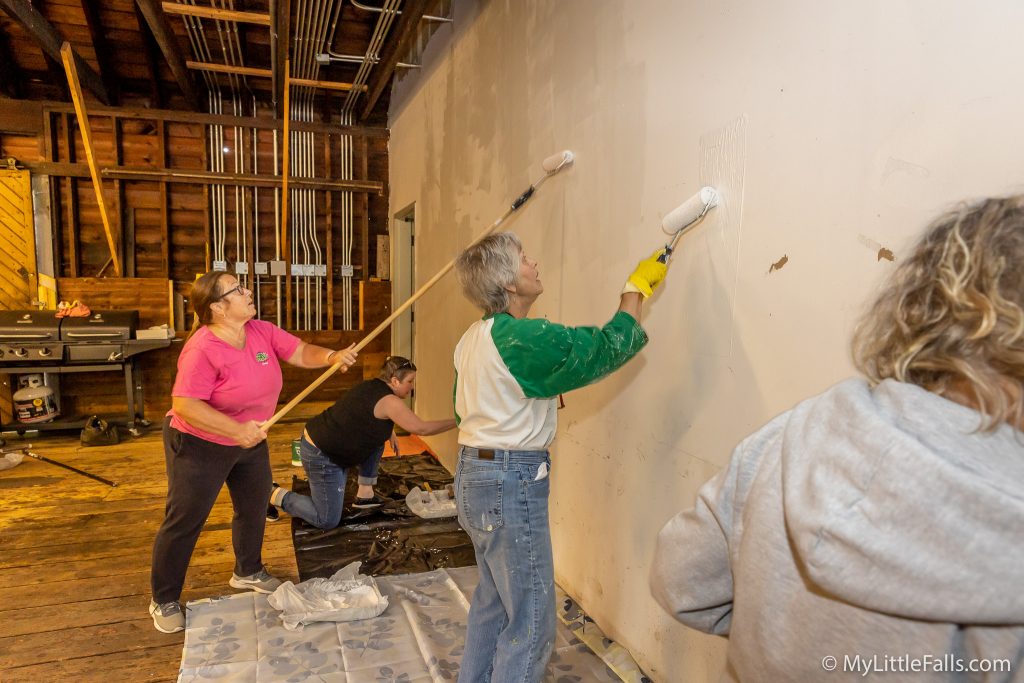 Photo by Dave Warner – Members of the Little Falls Rotary Club work on painting one of the rooms at the Marina.