Heath Williams, the owner of Rustic Ties in Dolgeville, takes a short break while setting up the venue for a Friday night concert with Jake Dodds.

Heath Williams has created one of the most unique event venues in upstate New York, right here in Herkimer County.

Williams is from the area came up with the idea while he was in Orlando, contemplating retirement. “Every time I heard of someone going to a wedding, they were going to some place I’d never heard of one or two hours away.

He started asking people why they were having to go so far, and they told him that there weren’t any venues that could hold 175-200 people, that they were all booked, or not what the couple was looking for.

That caused him to start researching wedding venues in Florida and then the ones that were in this area, sort of on the rustic side, just to get an idea of what was around. “I visited multiple venues, got feedback from people up here and down in Florida, and kind of picked their brains on what they liked and what they didn’t.”

From all of that research, he said he tried to design something without the negatives, but will all of the positives.

“The problem with most rustic venues is that they start with an old barn. So the place was really built for cattle, not for weddings. So while it’s got the rustic look, a lot of times it doesn’t have the functionality that you really need,” he stated.

Typically in those types of facilities, bathrooms and other facilities would be downstairs in the former basement area and the main floor would be the dance area, causing ADA and other issues. In upstate New York, when it rained, you’d get pushed into the barn and be locked in there pretty much from when you arrived until you left.

“That’s what gave me the idea of having the attached pavilion and a lot of outdoor space that is covered so that if it is raining, you can still get out feel the air, breathe and not get wet,” he said.

Williams decided that coming back to Dolgeville to be closer to family and friends, was the best place to break ground. “I was the only one who had moved away. I decided to make it seasonal, so I could still be retired six months out of the year.”

When speaking about the facility, Williams said, “From the time that you pull into the paved portion of the parking lot, which is really a handicapped and drop off area, it’s all one level. Anyone who is handicapped will never have to take a step.”

People thought he was crazy when he built what he calls the utility building, right in front of the barn and pavilion. “It was really by design. What it does is, once you come in, that blocks off your view of the parking lot and the street. It also prevents the noise and light from bothering the neighbors on that side.”

He says once you get in there, your other view is pretty much nature. “There’s nothing else going on, and that’s part of the design.”

Williams said that was something that he had learned about in his research.

He also said that he’s made it picturesque to help the photographers get pictures of the bride and groom getting ready.

Even the placement of the pond was something that he spent a lot of time thinking about. “It’s really pretty when you get out here and it’s peaceful. Depending on the time of the season, you can have corn growing out there, soybeans, and in the fall there are different spots where you can see the foliage.”

The parking lot can accommodate about 200 cars, and there is even room for him to develop an overflow parking area.

Williams initially started with weddings, friends, and family who hadn’t seen the venue, but now he’s on a mission to bring in some good quality musicians, and example being up and coming country star Jake Dodds, who performed on July 16th.

“I had all these open dates, so I just brought in a local band and people came up and they were amazed at how different it was. They said ‘it doesn’t have that bar feeling that we’re used to’.”

He said that most bars in the area where you would listen to music are small and long, which leads to a very crowded environment where you can’t really spread out and enjoy the experience.

“Up here, people can just sit outside, talk, and go from one table to the next, or go inside and move around. If you’re outside, the music is in the background and it’s not blasting you and you can talk, enjoy the scenery and have a drink,” he said.

During COVID, he said that the guidelines seemed to be tougher for weddings than they were for live music, so it got him thinking about booking more music.

That led to someone telling him that they could bring nationally touring artists out of Nashville to his venue, “So we booked a few of those. Little by little, we’re improving that experience. I bought a nice professional stage and curtains to draw your eyes to the center of the stage.” 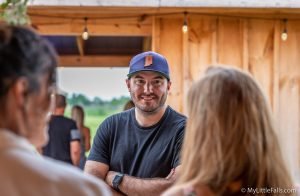 Photo by Dave Warner – Country start Jake Todds listens to a couple of his fans at Rustic Ties in Dolgeville.

Williams has also installed acoustic panels to improve the sound. “Several of the artists have told me how good it sounds in here and how just how beautiful the place is.”

The Nashville artists have caused people to come from much further away. “People have stayed in rooms in Little Falls, and have eaten in the area. I’m appreciative of the people who have bought up property along the canal and are reinvesting in the community, even here in Dolgeville.”

At some time, he’d like to bring major artists to the area. “That takes a lot of money, so I’d have to make sure that I have people coming to shows now to know that I have enough interest to sell tickets to cover the costs.”

“I want something for the local people, but it’s crazy how much interest we’ve gotten from outside the area. I think people can be proud of what we have going on,” he said.

In the future, he wants to add another outdoor pavilion area that could hold larger events without any walls. “I’m leaning towards having every Friday for live music and my Saturday and Sundays just for weddings so that people can know there’s something going on here each weekend.”

“I would love to be known for a place that people can just come to and just have a good time. Whether to mingle or listen to good music, or a little bit of both,” Williams said.

To find out more about the facility, visit them on Facebook at facebook.com/rustictiesllc