Julie Izzo one of the owners of the Southern Girl Food Truck serves up an early dinner during a Local Fresh Thursday event at Burke Park.

After three successful years in the food truck business, Heather Lamphere and Julie Izzo have decided to plant permanent roots in the former Alfie’s Diner location at 83 North Main Street in Dolgeville.

Lamphere is from the area, living in Salisbury and going to Dolgeville schools. She’s a teacher in Richfield Springs, teaching high school English.

She said, “I always thought this would be what I did in retirement, but I guess we’re getting there a little earlier than that.”

Lamphere and Izzo started with the Southern Girl Food Truck about four years ago and they were working hard with it, but having fun at the same time.

Izzo is from Ashville North Carolina, and she’s been in New York for about 21 years but hasn’t lost a bit of her accent. “I’ve been in the Dolgeville area for 18 or 19 years now.”

She has been in the restaurant business for 32 years. “I’ve probably worked in at least 30 restaurants in my life.”

The idea for the food truck came up while she was home with the kids, thinking about what she wanted to do when she went back to work.

“My sister passed away four years ago, and she was a wonderful cook, and she inspired me to just go after it after I had dropped that idea on her. She said follow your dreams, you can totally do it,” Izzo stated.

She started thinking about all the people who had inspired her over the years with that feeling of home, roots, and family recipes that had been passed down. “I decided that I wanted to cook, and I wanted it to be good for people, and something that kids would enjoy.”

Izzo loves festivals and events and she thought “People need something different to eat when they go to a festival. So, that’s where these different ideas for food came from, getting fancier, and fancier.”

“It just kind of took off – it was a wild and crazy idea,” she said.

Lamphere said that Izzo was babysitting her kids one day and she had told her about the idea. “One day I pulled into the driveway and here is this giant pink food trailer in the driveway, and I was ‘what is that?’”

Izzo had bought it just three weeks prior to the Violet Festival, and that was going to be her first time out in public with the idea. Lamphere said, “You’re going to get all this ready by then?”

Lamphere watched the daily progress and felt that she wanted to be part of it as well. “So, it was the week of the Violet Festival and she was going crazy getting ready and I said, Who’s helping you?”

“Who is going to be with you the whole time because you cannot do this by yourself,” she said.

Izzo said, “Well I don’t have anybody,” so Lamphere said she’d be there. 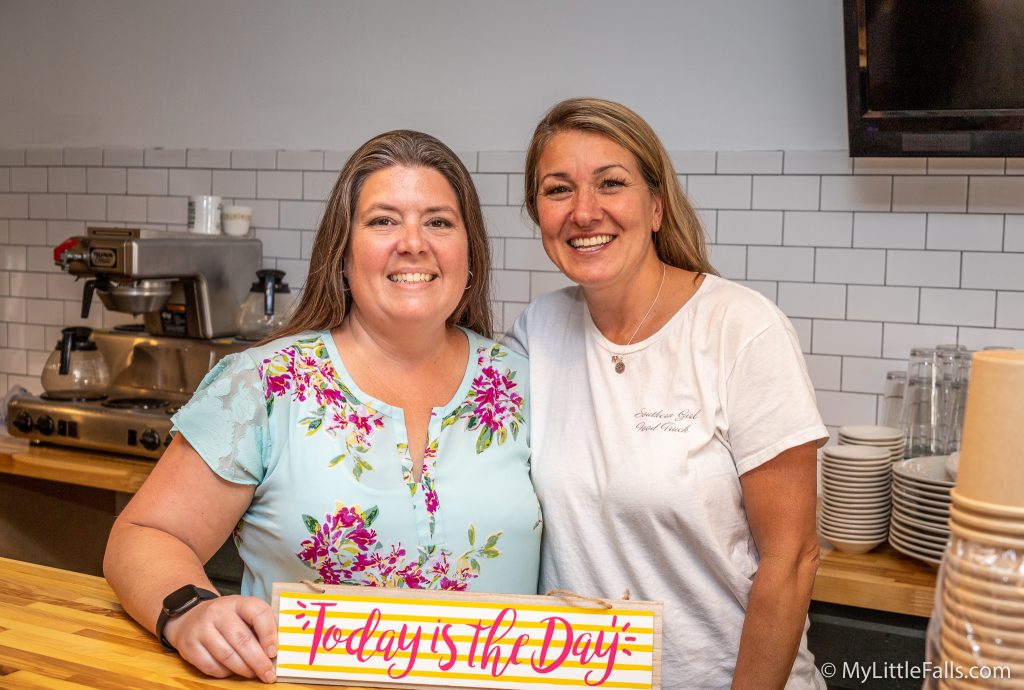 From that day forward, the two have worked together on making the Southern Girl Food Truck a success. Izzo said, “We’ve been like Gouda and Blackberry since then, which is one of our favorite sandwiches.”

They did two years of the food truck business, starting out with smaller shows the first year, and then bigger ones in year two. “That first year was a real learning year for us,” stated Lamphere.

“You kind of have to be invited to the bigger shows,” Izzo stated.

They had their first big surprise at the Remsen Barn Festival’s 40th-anniversary event. “We won first place for food truck vendors,” said Izzo. “We were beside ourselves.”

“It was a great second year, but our third year was COVID and we didn’t open up at all. So, this is our fourth year, but the third one in business,” she said.

Izzo said that even though they’re planning on opening up the restaurant in Dolgeville the first week of September, they are going to continue with the last scheduled events that they have for the year with the truck.

“Sometimes opportunity just shows up and you have to jump at it,” said Izzo. “This was friends and followers of our food truck and people that have supported us from day one making connections, and wanting their diner back,” Lamphere said.

“We’re still going to do the Cheese Festival in Little Falls because those Little Falls festivals and the Dolgeville events were really the springboard for us. People know us and follow us on Facebook and we want to keep that following,” she stated.

They also plan on having the food truck at the 315 Foodies event on September 26, 2021, as that group goes after the world record for the longest Charcuterie board. “We’re pretty excited about that too,” said Lamphere.

The food truck for both of them was like a part-time fun thing during the summer. “A hard workin’ girls day out,” Izzo said.

Izzo is quitting her full-time job to open the diner. “It’s going to be a lot easier for me, I’ll be right here in my hometown. I don’t have to travel and my kids are right here in school.”

Lamphere says that she’s going to help as much as she can while continuing to teach for the next 12 years. “Whether it’s early in the morning, after work, or on the weekends, I’ll be here, but my life will definitely be different.”

The two said that they’re planning on opening from 7 – 2 Tuesday through Sunday. “We plan on bringing our food truck sandwiches here and incorporating those into the menu, but also some typical diner fare,” stated Izzo.

Soups sandwiches, burgers, pulled pork, and all of the traditional breakfast items will be on the menu, but you will also see a little bit of a Southern twist to things.

“There’s going to be some grits and home fries in there. And, for lunch, I’m also going to do some shrimp and grits, which is also one of my favorites,” said Izzo.

You can expect their many different kinds of teas and a lot of homemade pies and desserts. “Very homey. Just kind of like down-home cooking,” she said.

“I love this whole thing because people are so happy when they have a full belly,” said Izzo.

“We’re going to add our own touches so it won’t be like every other diner. We’ll have all those old stapes, but we’ll have those that go with our brand… a little Southern cookin’,” said Izzo. “Somewhere you can take your family to eat.”