Photo by Katie Drake – The old Greek Revival style building built in 1830 on the corner of East Main Street and North William Street is now owned by Dan and Kelly Grcic.

“Are you guys crazy?” That’s what most people said to locals Dan and Kelly Grcic a few years ago when they learned that they had just purchased the old Greek Revival style building built in 1830 on the corner of East Main Street and North William Street.

The building has a cool history. According to Jeff and Pat Gressler, of the Little Falls Historical Society, research shows it was primarily a residence owned by Bessie Munson who was a Latin Teacher at the local High School from 1918 until she retired in 1965. Between the years of 1949-1956, it may have been a boarding house with at least one person on record who also resided there, Josephine Skinner.

At one point in the late ’40s, it was also a retail establishment of some kind. The building sat vacant from 1967-1968 and then in 1971 was purchased by the German Maennerchor which became a well-known watering hole, that in its hay day was a pretty fun place to beverage, play shuffleboard, pool, and darts.

It sat vacant on the market for a while before Dan and Kelly purchased the building in 2017.

Most people ask why?

My next question was probably what most people ask them next. Why? Dan said, “I always wanted to buy an old building and fix it up.” Kelly added, “I wanted to live somewhere in town where we walk to places like stores, restaurants, and bars. It is so nice for our girls to be able to walk to school.”

The bones were good, right? “Not really,” Dan replied. (Side Note: Dan and Kelly are pretty funny and straightforward.) “When we bought this place, the building was only a couple of years away from being condemned. The roof leaked and some of the brick walls were crumbling and starting to cave in.”

When asked about what they connected with, Dan’s answer was, “It was old and it was cheap, but it still had some character.” Kelly said, “We wanted a building that we could make into an upstairs living space and downstairs was a space that would allow me to open my own business, something I have always wanted to do,” she said.

“I was inspired by Chi Chi’s woman’s clothing store. As a little girl, I used to go to that shop on Main Street with my grandmother. I loved it there and I’m pretty sure that’s what sparked my dream to open up my own shop someday.” They both smiled and looked at each other before adding “It’s our way of making the community where we grew up a little better by fixing up this old building.”

And did they ever. If you can remember the dark dingy bar room at the Maennerchor, you won’t believe the transformation. For three and a half years, after working a full forty hours on the railroad for CSX, Dan would work on the Maennerchor every Friday, Saturday, and Sunday.

Where did the nickname come from?

You might wonder how the building got its nickname? Well, since it was pretty much all Dan did for several years, and he wasn’t shy about talking about all that hard work and how exhausted he was.

Someone along the line started referring to the building as the “The Dan-erchor” and it stuck. He smiled, laughed, and added, “It’s a good thing I work for zero – ‘cause it was a LOT of work!”

He started in the basement and did all the demo room by room. He said, “Working in that basement at night with no power and just a headlamp – it was about the scariest place on earth.”

Did you find anything cool during the demo? Dan said, “Under the linoleum upstairs, the floor was lined with all old newspapers from the ’40s. Car catalogs too. Everything else was pretty much garbage.”

He fixed the roof, jacked the floors, added new beams, and reinforced the old beams. The demo was no joke, a lot of hard work. True Story: One time the firefighters across the street came running over to check on Dan during the demo, to see if there was a fire because there was THAT much dust pouring out of the upstairs windows.

When I visited the place shortly after they bought it and before they really got into the project, I remember the potential. Kelly actually thanked me for being able to envision what it could be, because almost everyone else told them they were crazy.

When I asked him how many cups of Stewart’s coffee this renovation took, he said, “Oh, god, like a zillion. I drank so much coffee, I had to quit” as he sipped his tea.

This place is so very ‘them’

After years of stabilizing and putting the building back together, the upstairs renovations began. If you are lucky enough to call Dan and Kelly friends, then you’ll know what I mean when I say that this place is just so very them. It’s unique, fun, and while it looks like it could be a centerfold in a design magazine, it is still cozy and comfortable.

They used as much reclaimed wood as possible, and almost every piece has a story. Kelly says, “Everything I want is usually never something we can buy from a store, we joke that everything is custom.”

There are special touches in every single room like local artwork and family momentous. Kelly’s family, the Scarano’s, used to own a bread company and her father had an old Scarano’s Italian Bread bag blown up and framed, that they proudly display in their family room.

She has decorated the place with many finds from our local antique stores. They worked hard to keep almost all their other purchases local. Kelly picked the most beautiful, color scheme with paint from Pohlig’s. They purchased carpeting from Ed’s Carpet, the floors were refinished by Mark Mornelli, and countless trips were made to George’s Lumber and Ace Hardware.

Photos (above) by Katie Drake

They moved into the upstairs in 2018 and Kelly and Dan have made this building into a beautiful home for their family and arguably, soon to be Little Falls’ coolest shop yet.

Renovating an old building certainly has its ups and downs. For example, we were supposed to meet to talk last Friday (the 12th), but Kelly texted me at 6:30 am to ask me to reschedule, because their furnace wasn’t working. Of course, I told her no problem. Her response, “Welcome to the Daenn-erchor!”

Are you thinking of renovating an old building? This is not the first building that they have renovated. The Grcic’s have renovated a home on Ward Street and another one on Burt Road so they are super qualified to offer their advice to others thinking of doing the same thing.

Dan says, “If you are rich and you can pay someone to do all the work, this should be easy. If you are like us and doing all the work yourselves, my advice is don’t give up!” Kelly’s father gave them some great advice, “It’s only a mistake if you give up.”

Dan added, “You have to really want to do it. You can’t be half in.” Kelly said, “It was really hard. Dan was working 40-50 hours a week on the project. I was home with our girls, and it was a very stressful time. It is also hard when you both have a vision and it’s challenging to merge that into exactly what we both wanted.” 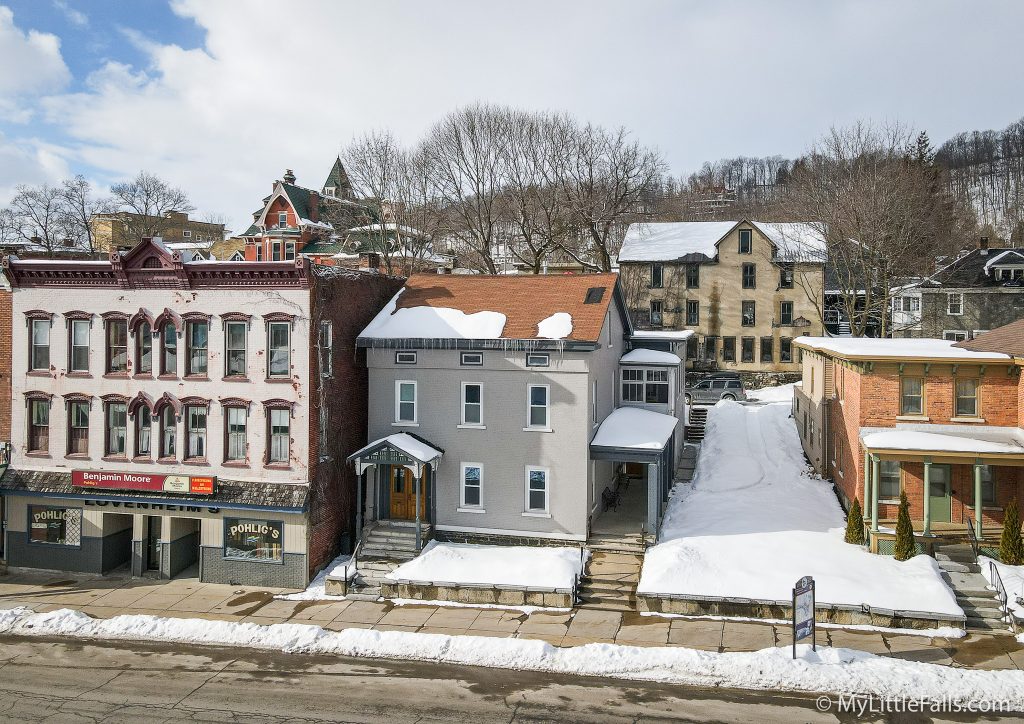 Photo by Dave Warner – The old Greek Revival style building built in 1830 on the corner of East Main Street and North William Street, now owned by Dan and Kelly Grcic.

It’s not done yet

They made it through and successfully turned their dreams and visions into reality, although they aren’t done yet…

Chickweed is the name of Kelly’s business that she started in 2015. She is best known for her handmade all-natural beauty products. Her store in the West Mill Shops features handmade teas, essential oils, diffusers, shirts, scarves, accessories, and more.

Her dream of opening her own shop downstairs in their home is close to becoming a reality. Dan put in a nice kitchen downstairs for Kelly to make her products. And her boutique space is just as beautiful as the upstairs, even if there isn’t much in there yet.

Kelly’s Chickweed mission is to create a cozy and unique shopping experience, one that gives customers a sense of pride and delight knowing their purchase supports a local family business but also that they are choosing products that are good for their bodies and kind to the Earth.

In addition to her handmade products and gifts, she plans to sell clothing, especially dresses and cool and unique gifts as well. “If you want to go out for a night on the town, to the Canal Side, or the Brewery, you will be able to find a fun, casual outfit and maybe even a pair of shoes.”

Dan built her a nice dressing room space and bathroom for the business. The sales counter is done.

The next step is to design the layout and then for Dan to build her some more custom shelving and displays. She is considering renting small spaces or selling other local handmade products. Message her on the Chickweed Facebook page if you are interested or know someone who may be interested.

Kelly is really excited about opening a small business. She said, “I envision someone walking by, seeing me drinking coffee on our screened-in porch upstairs one morning, and yelling up ‘Kelly I need a dress for tonight,’ and me running down to open the store for them.”

So, next time you see them out and about be sure to say “Thank You!” to Dan and Kelly Grcic, for not only saving their old building on Main Street but for making it beautiful again.

And definitely be sure to stop in and check out Chickweed when it opens in late spring. 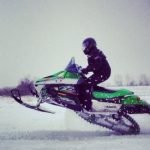 Katie Drake moved to Little Falls in 2003 and fell in love with this city. She has always had a passion for writing but doesn’t think of herself as a writer per se. The opportunity to tell some stories about the great people of Little Falls, share her personal perspectives, and some humor from time to time piqued her interest and here we are.

In 2020 Katie and her best friend Chris began their greatest adventure yet, with the birth of their sweet and sassy son Nolan who makes them laugh every day