The franchise(s) history of the Utica Comets

The Comets are one team, but one of the franchises that have made up the team goes back a long way into AHL history.

The Merriam-Webster dictionary defines a franchise as “the right or license granted to an individual or group to market a company’s goods or services in a particular territory”, and when it specifically comes to sports, it says it is “the right of membership in a professional sports league”. With those definitions in mind, the Utica Comets are a part of a lineage that goes back much longer than the team itself.

To avoid confusion, it’s important to differentiate between the terms “team” and “franchise”. In simplest terms, the team is the product you can actually see play, buy it’s merchandise, and in short, identify with. The franchise can best be thought of as the business organization that owns, operates, or leases the team itself. When a team is said to move from one location to another, it is actually the franchise that moves – they are simply taking their team with them. In the case of the Utica Comets, the New Jersey Devils own the American Hockey League franchise that currently plays in Utica, and is leased to Robert Esche, President of the Utica Comets, in the form of a ten-year affiliation agreement with the Comets.

The Utica Comets took the ice as a team for the first time in October of 2013. The team was born after the Vancouver Canucks purchased the franchise that was the Peoria Rivermen of the American Hockey League and moved it to Utica to become the Comets. This franchise would remain in Utica until 2021 before being moved to Abbottsford, British Columbia. The current Utica Comets team franchise is owned by the New Jersey Devils (more on that later).

In 1939, legendary Hockey Hall of Famer Eddie Shore purchased the Springfield Indians franchise and would proceed to forever etch it in hockey history (for a more detailed look at Shore’s time owning the franchise, visit https://funwhileitlasted.net). In 1942, the United States Government took over Springfield’s home arena to help accommodate the World War II war effort, so the franchise would be forced to temporarily go dormant. The players were loaned to the Buffalo Bisons who also played in the AHL until 1946 when the Springfield Indians franchise began operations once again in the American Hockey League.

The rule of thumb with Eddie Shore as both a player and as an owner was ‘expect the unexpected”, and in 1951, he moved the Springfield AHL franchise to Syracuse, NY to be called the Syracuse Warriors. The Springfield Indians team name still existed, as the notoriously shrewd Shore still maintained a team in Springfield known as the Indians that played lower level hockey during this time. The stay in Syracuse lasted only three years as Shore became unhappy with how things were going in Salt City and moved the AHL team back to Springfield in 1954, also taking back its team name (the lower level Springfield Indians was then folded). 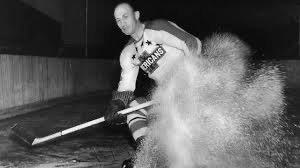 Eddie Shore at the end of his playing career wearing the uniform of the New York Americans. Photo credit: nhl.com.

Things were status quo for Springfield from 1954-1967. In 1967, Shore leased the franchise to the Los Angeles Kings to serve as the then brand new NHL team’s AHL club and became known as the Springfield Kings. This arrangement lasted until 1975 when Shore took full control back from the Kings and operated the franchise until he finally sold it in 1976 and left the game at the age of seventy-four.

The original Springfield franchise that became the IceCats, was sold again in 2005 and moved to Peoria, Illinois to become the Peoria Rivermen of the American Hockey League. As mentioned before, this franchise was moved to Utica NY in 2013 to become the Utica Comets, and in 2021 it was moved to Abbottsford British Columbia to become today’s Abbottsford Canucks. Overall, this franchise has won seven Calder Cups as champions of the American Hockey League.

The current AHL franchise that plays in Utica is owned by the New Jersey Devils, which could lead one to believe this is the franchise that was the Utica Devils – the AHL team that played in Utica from 1987 through 1993. That franchise was owned by New Jersey as well, but it was sold to the Calgary Flames in 1993 and moved to Saint John, New Brunswick after the 1992-93 season.

The current franchise that is leased to the Utica Comets began life as an AHL expansion franchise known as the Lowell Lock Monsters in 1998. Making their home in Lowell, Massachusetts, the Lock Monsters served as an AHL affiliate for five different NHL teams through 2006. In 2006, the New Jersey Devils purchased this franchise and renamed it the Lowell Devils.

In 2010, they moved the franchise to Albany, NY, where they played in the AHL for seven seasons as the Albany Devils. They were once again on the move in 2017, this time it was 140 miles down Route 88 to Binghamton, NY to become the Binghamton Devils.

After four seasons, it was announced the Devils time in Binghamton would come to a close. They moved the franchise to Utica for the 2021-22 season and beyond – the rest, as they say, is history.