Each year, the Salisbury Historical Society plans a new exhibit to be featured for their summer season, running from June to September. This year the exhibit will feature the fascinating history of the Salisbury Railroad, which was an extension of the Dolgeville and Little Falls lines. Running from 1909 to approximately 1946, this extension connected communities and created opportunities for industry to thrive.

As a member of the Salisbury Historical Society, Kevin Yatarola was an integral part in collecting photographs and articles for the exhibit. His background as a photographer made this even more interesting as he was already organizing hundreds of family history photos and a few were of the railroad. He was surprised by what he found in his research. “It wasn’t clear to me at the time but my great-great-grandfather Clark Ingersoll both worked on the railroad and was an avid photographer and photography collector” Kevin recalls.

Creating an exhibit of this size is a team effort. With the help of Historical Society members and the surrounding community, artifacts and information flowed in. Bob Schmid, Vice President of the Historical Society, was also an important player, finding assets and locating memorabilia while also lending from his own collection as a former railroad worker. The Historical Society itself has a large collection of local historical photos and archives which Catherine Barclay (President), and Sue Perkins (Secretary) sorted through. Brenda Barton, the town historian, who had recently published a book on Salisbury called “A Place to Remember – Salisbury New York”, had over 800 photos to pull from.

Generous donations and loans have been given such as copies of the blueprints from the New York Central Railroad, original stock certificates, and a timetable that would have hung in the station. The Historical Society is thrilled to have such an outpouring of support and will be listing the donors as a thank you during the exhibit. All of this information is brought together and organized by Nora Cool-Guinup, the exhibit designer, who plans the exhibit layout.

One of the key resources for this project were two books by Lucinda M. Parker, “The Little Falls & Dolgeville Railroad: 72 years of Shortline” and “Into Salisbury Country” which Kevin and Bob called “the blueprint for knowing the history and timelines.” “It was pretty amazing research for pre-internet times,” Kevin mentions. “The advantage nowadays was that I was able to get information out of smaller newspapers in NYS that are digitized. I can go online and get articles as they appeared in Potsdam, NY, or Lowville. I was able to fill in the blanks of things that Lucinda just didn’t have access to.” 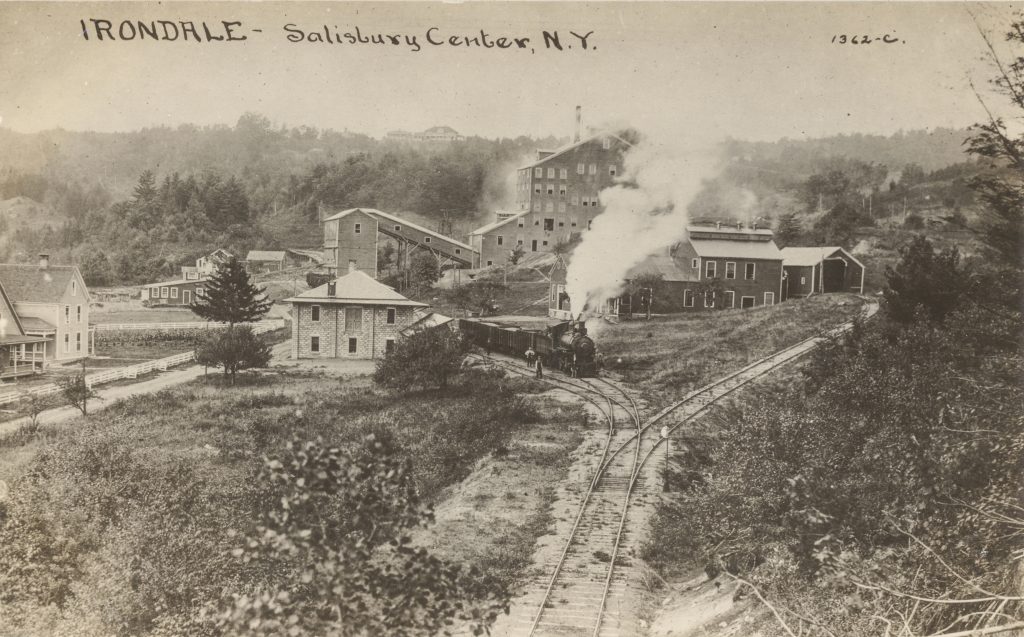 Technology has certainly made Kevin’s job easier. “Sometimes the Historical Society works on projects and there are not a lot of assets…things that go back pre-photography. But here’s a case where we have this rich collection of material, we have people that are specifically interested either from a family side or because they’re railroad fans and they collect pictures. The internet has made it so much easier to locate items.” He explained how the Salisbury Historical Society has “a unique situation where we can tell this story in pictures.”

The Pride of Salisbury

“It appears that having the train come up to Salisbury Center was a big deal. We have some pictures of people just standing on the tracks, all dressed up in their Sunday finest” Kevin says of his research. “People were really proud of it… It was a big thing to have a train come up into little Salisbury Center. And also the fact that it represented prosperity. It meant there were jobs. It meant that Salisbury did things that the rest of the world wanted.”

The railroad extensions were industry-based. “It was not driven by passenger service, although that became a part of it later…” Kevin explains. Products and materials needed to be moved down the line to Little Falls with their access to the Erie Canal. The Little Falls – Dolgeville line was driven by Alfred Dolge in his distribution efforts. The beginning of the Salisbury extension was built around the Irondale Ore Mine to move material. Next, the Jerseyfield branch was a private branch that brought the logs down to Salisbury Center and then continued to the canal.

The story of the Salisbury Railroad even features local lore and intrigue, such as the mystery of the Dolgeville Wreck. A few train cars from Salisbury were not braked and ran 3 miles, gaining steam, and crashed into the Dolgeville station. One person was hurt, although not seriously, but it caused a good deal of damage to the station and cars. The mystery, Kevin says is “there’s a question of how it happened. And we haven’t figured out the answer to that yet. The articles of the time talk about how some of the workers there moved a car off to a side branch that didn’t have its stoppage mechanism engaged on the tracks and it just started rolling. Another story that went around was that the cars were released by some mischievous youths… it could be a local tale, it could be the truth we just don’t know for sure.” Did local lore or the newspapers get it right? 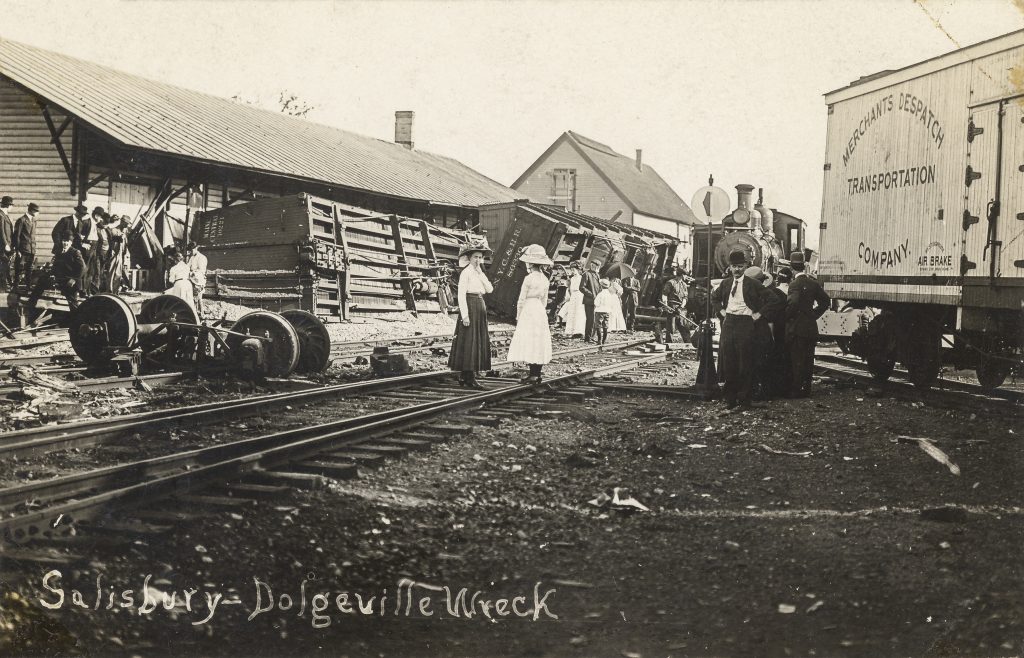 This unique exhibit has many stories to tell and interesting facts to share. Want to find out what rare piece of history was left behind in Jerseyfield? I can’t tell you here, you’ll have to visit the Salisbury Historical Society to see the exhibit!

The Salisbury Railroad Exhibit will be a hit with all ages and includes photographs, articles, and artifacts such as lanterns and a conductor’s uniform, a kid’s area with train activities, and a collection of train songs dating as far back as 1910. The Frisbie House is open for tours on Sundays from 1-3 pm, June through September, or you may call for a tour appointment. A special extended weekend of tours will be given Saturday, June 11, and Sunday, June 12th from 1-3 pm each day. 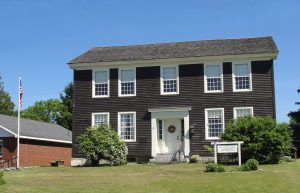 The Salisbury Historical Society is housed in The Frisbie House in Salisbury Center, NY, and is the local heritage and history Museum for the Salisbury area. Located at #109, Route 29A in Salisbury Center, NY, the Historical Society features a Summer Exhibit and standing collections of cheese making, mills along Spruce Creek, the iron mines, one-room schoolhouses, and local characters such as Nat Foster. Admission is free, and donations are appreciated. They also offer special events and talks during the season as well. You can follow them on Facebook (https://www.facebook.com/SalisburyHistoricalSociety/ ) for more information.

Author’s note: While viewing some of the photos Kevin had collected for this exhibit, I stumbled upon a photo of my Grandmother and her sister standing next to a train in Salisbury! I was so delighted and amazed, as I had never seen this photo before. I highly recommend visiting the Salisbury Historical Society’s Summer Exhibit, you never know who you will find in the photos they have collected! Oh, and don’t forget to pack a picnic to enjoy by the famous Covered Bridge – just a block away! 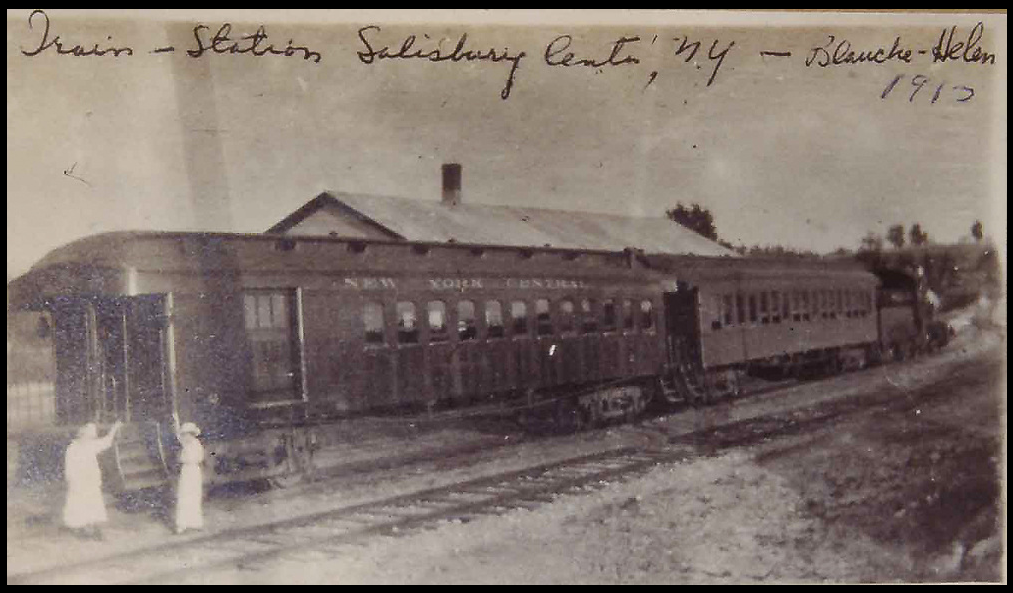