Think Local Little Falls wants to make sure that there are still safe activities going on in the City, despite the pandemic. So for December, they have several events planned. According to Jessica Kelly with Think Local, “We’ve been thinking in creative ways because everything is different this year.”

“We’re not able to do our traditional Small Business Saturday, but we are still participating and are encouraging people to shop local this season. We thought that instead of focusing on what we couldn’t do this year, we’d focus on what we could do, and American Express was still hosting the event,” she stated.

The group applied to American Express and received a small grant to help get the word out about shopping local and the promotional materials that go with it, for the Saturday after Thanksgiving. 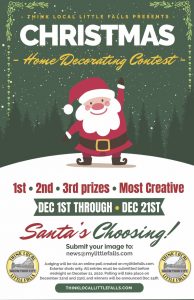 Think Local Little Falls is also going to have a Home Decorating Contest that will run from December 1st, through December 21st. Kelly said, “We hosted our first home decorating contest this fall during Halloween and people were really excited about it because it helped people get in the spirit. So, we thought we should do this again as we move into this holiday season.”

“We’re really excited to partner with My Little Falls on a second home decorating contest. People will then be able to vote on the MLF website on the 22nd and 23rd of December,” she stated.

The first prize has been donated by Daniel Preston, and it is the most interesting one. The winner will receive a free lesson in a helicopter, or just a ride around Little Falls if they are not interested in the lesson. 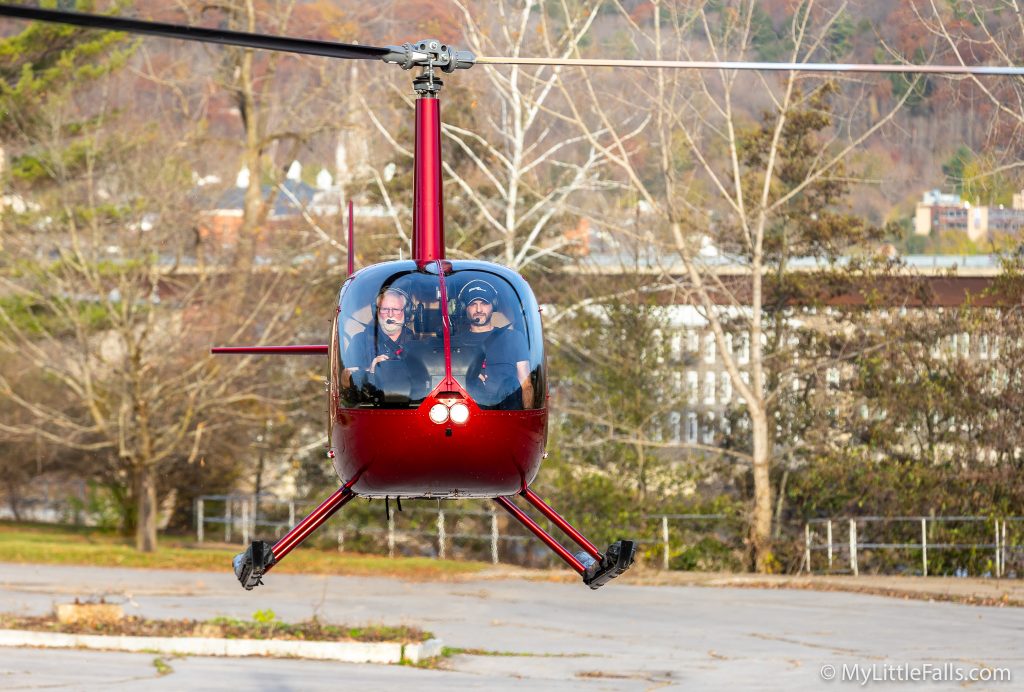 Photo by Dave Warner – Daniel Preston (to the right) and charter company pilot Greg Semendinger land in the parking lot at Hansen Island.

Preston is purchasing Republic Helicopter, a charter company with a Robinson 44 helicopter, and plans to open a new location in Little Falls and Rome. He said, “I wanted to give an experience, instead of the usual gift certificate or cash.”

To participate, please email the photograph of your house and the Christmas lights displayed on it to news@mylittlefalls.com 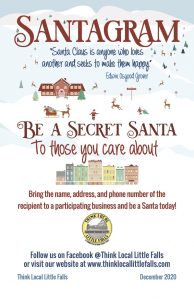 “In conjunction with Small Business Saturday, we’re going to have our own secret Santagram program starting on that Saturday and running through December 21st,” said Kelly.

The idea for the program is that you can either walk into any participating business, or call them with a friend or family member’s name, phone number, and address and buy them a gift in secret. The business will then call the recipient and let them know they have a gift waiting for them.

“Each participating business will be offering one Secret Santa gift option which will be promoted on Facebook and our website. Most of our businesses are also offering curbside pickup for those gifts for people who might be a little bit hesitant about going out and shopping or visiting the business,” she said.

Later in the month, those that have opted to have their name revealed will have a postcard sent out on their behalf notifying the recipient as to who gave them the gift. “We wanted to encourage people to spend their dollars locally in a season where traditional shopping may not be happening,” Kelly said.

“Many people said that the idea of giving a gift in secret would be really fun, and it greats some holiday cheer.”

Kelly says, “The essence of what we’re trying to do this December is to create some holiday spirit and some normalcy at a time when everything is different.”

The group also wants to mention that Small Business Saturday materials will be available at all Think Local businesses participating in the Secret Santagram initiative. Those businesses will be listed on the Think Local Facebook page and their website.