Tug Urger passes through Little Falls on its last voyage

The Tug Urger is pushed through the flood gates in Little Falls while another tug is busy cleaning up debris from the last storm (to the left).

The Tug Urger was pushed through Little Falls Wednesday afternoon on its way from the Waterford dry dock to the NYS Canal Corporation’s Lysander Maintenance Shops in Onondaga County.

At this facility, they will pull the Urger out of the water for on-land storage until the National Park Service can conduct a Historic American Engineering Survey, and the NYS Canal Corporation can assess what the future should be for the tug.

“The group’s unanimous recommendation was for the NYS Canal Corporation to make the necessary repairs in order to stop further deterioration while it considers next steps for New York’s flagship Teaching Tug,” they stated.

Charlie Chillemi (or Charlie the Tuna as he was known locally) worked on the Urger for several years and made many stops in Little Falls, even selling his Corvair to Mike Bulger.

He said, “I’ve worked all over the place and been an engineer working on different boats since 1953. I worked in the canal, on the coast, and all over.”

“There wasn’t much work around, and I heard they were looking for somebody – an engineer – to run their engine. So, I called and they said they’d check on it, and so I ended up on the Urger.”

Chillemi said he was responsible for all of the machinery on the tug while assigned to it. “It was fun. Everybody got along and we went to different places and I got the chance to see a lot of different things.”

“The crew would bring school kids on the boat and then they’d do lectures and tours. We’d explain about the canal, the history, and everything else,” he said. 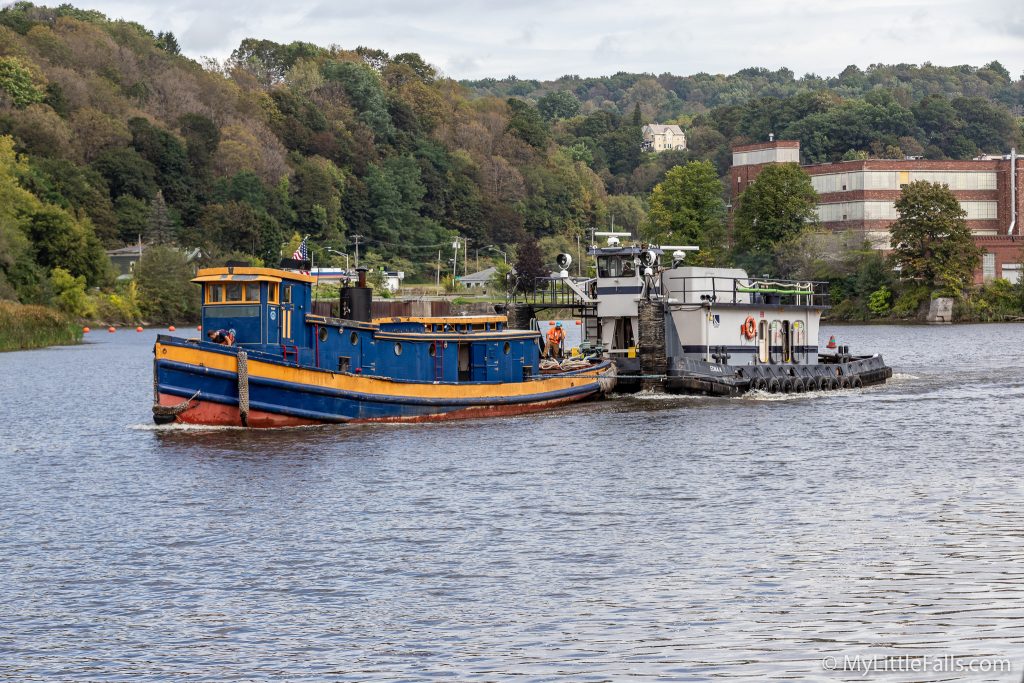 Photo by Dave Warner – The Tug Urger makes its way through the harbor area in Little Falls on its way to dry dock in Onondaga County.

He is upset with the idea of cutting it up, which is what some people have suggested. “That would be a shame. That boat was in good shape and they should restore it.”

Chillemi said that he is perfectly willing and capable, despite his age, to help with the restoration project. “I’d like to get my fingers in there so they don’t cut it up. I’ve got a lot of experience with that thing.”

He feels that people are thinking that it will cost a lot of money for the restoration but he says, “It could be restored for a lot less money. There are too many people getting their fingers in it that don’t know what the hell they’re talking about.”

Launched in 1901, the Urger entered canal service in New York in 1922. For more than 60 years, the tug was responsible for moving barges, dredges, and derrick boats on the Erie and Champlain canals.

The ship was retired in 1986 but returned to service in 1991 as an ambassador for the canal system. The Tug educated over 100,000 students on the significance and history of the NYS Canal System while in service during its last 25 years.