The Connected Community Schools team, along with educators in the Little Falls City School District, welcomed the National Education Union from Great Britain for a tour and workshop at the Little Falls Middle/High School on Tuesday.

According to Keith T. Levatino, Superindentent of the district, they were teachers, instruction specialists, and leaders from the UK. “They are the same equivalent to our American Federation of Teachers, it’s the parallel version from what I understand in England.”

The group was interested in learning about the makeup and workings of the Connected Community Schools initiative and how it worked with LFCSD.

Levatino said, “The word has spread on how successful our program has been to England.”

“We’re doing a nice little presentation for them, giving them a tour and going to have a formal luncheon,” he stated. 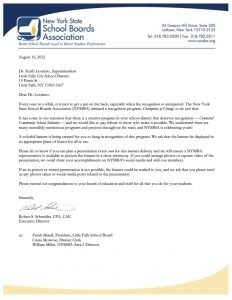 “I’m giving full credit to the Rome City School District because we’re here, only because they came out of Albany. They really should have been in Rome because it’s the district that initiated this to bring it to Central New York,” he said.

“For me personally, I’m really involved because I’ve been elected the board chair of Connected Ed. It’s the governing body for the non-profit,” Levatino stated.

He said that Connected Community Schools would get the opportunity to serve students in England. “What are we getting out of it? The opportunity to demonstrate how successful we are in supporting all the kids here in Little Falls.”

Levatino also noted that just on Tuesday, the district had received a letter from the New York State School Boards Association (NYSSBA) recognizing the district and its partnership with the Connected Community Schools by awarding them a ‘Champions of Change’ award.

A colorful banner was being created, and a presentation was planned for the near future.