by Scott Kinville, host of the Martys Illegal Stick podcast

The Utica Comets versus the Syracuse Crunch is always an intense game. Saturday night was the fourth time these two teams have met over the past two weekends, and in this game, the intensity was off the charts.

Gage Goncalves of the Crunch opened the scoring just two minutes into the opening period when he skated right down the middle of the Comets zone and snapped a shot past Nico Daws that rang off the right post and into the net to give Syracuse an early 1-0 lead. A little over a minute later the Crunch got a bit overzealous with the physicality and gave Utica the game’s first power play. It only took the Comets three seconds to convert, as Reilly Walsh sent a pass to the left circle from the point where a waiting Alexander Holtz hammered a one-timer past Syracuse goaltender Max Legace to tie the game at one.

As the Comets were heading to the bench to celebrate the Holtz goal, a skirmish broke out adding to an already tense game. It didn’t take long for tempers to boil over again as Utica’s Brian Flynn laid a hit on Jimmy Huntington leading to retaliation by the Crunch leading to a four-minute Comets powerplay. This would be a productive man advantage for Utica as they scored twice on it. First, the Holtz-Walsh duo struck again in a replay of the first goal except instead of a one-timer, Holtz fired a wrist shot into the upper left corner of the Syracuse net for a 2-1 Utica lead. Syracuse then took a tripping penalty to give Utica a five on three powerplays and Reilly Walsh got a goal of his own when Chase DeLeo fed a pass from behind the goal line to the top right circle where Walsh blasted a one-timer off the crossbar and in to give the Comets a 3-1 lead they would hold going into the first intermission. 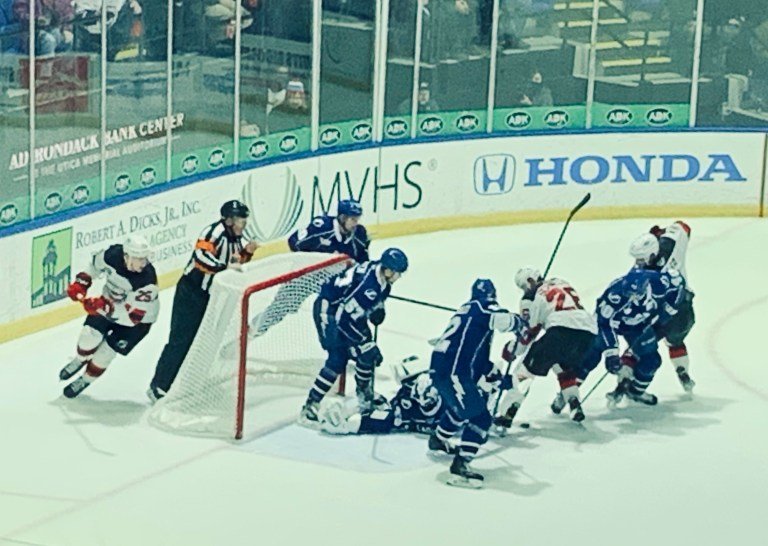 After a first period that had ten penalties between the two teams, the referees’ arms were not raised nearly as much in the second but it was no less tense. The Comets made 4-1 at the 7:51 mark when Brian Flynn, who was noticeable all night long, gained the Syracuse blue line, darted to the right side, and put a shot right between Legace’s legs for the goal. Syracuse answered back with a goal of their own by Ryan Jones when blasted a shot from the point past a screened Nico Daws to make the score 4-2.

Syracuse took the only penalty of the second period and it proved to be costly, as with eight seconds left in the frame, when Ryan Schmelzer sent a pass from the left side of the Syracuse crease to the right circle where Chase Deleo snapped the puck past Legace to the Comets into the second intermission with a 5-2 lead.

The Crunch opened the scoring three and a half minutes into the third period when Remi Elie one-timed an Antione Morand pass past Daws to make it 5-3, but that would be all they would get. The Comets defense held strong for the rest of the game and Nolan Foote capped the night for Utica with a shorthanded empty-net goal with three minutes and six seconds left to give the Utica Comets a 6-3 victory and Kevin Dineen the 400th win of his professional coaching career.

Notes: Syracuse outshot Utica 30 to 22…Utica was 4 for 5 on the powerplay, Syracuse was 0 for 3…Alexander Holtz (two goals and one assist), Chase DeLeo and Reilly Walsh (one goal and two assists each) led all Utica scorers, Syracuse had six players with one point each…Alexander Holtz is on a tear as of late, he has goals in three straight games and has points in the last six games he has played for the Comets…With a goal in this contest, Nolan Foote has a goal in two straight games and points in five straight games…The Comets lead the Empire Recycling Galaxy Cup Series against the Crunch five games to one…Utica plays again on Tuesday night at home against the Providence Bruins, Syracuse plays again on Wednesday night at home against the Cleveland Monsters.