The Utica Comets lost the winner take all game five against the Rochester Americans. Here’s a game five recap and three observations from the game.

by Scott Kinville host of the Marty’s Illegal Stick Podcast

After posting the best regular-season record in the Eastern Conference, the Utica Comets had huge expectations coming to this American Hockey League playoff season. On Thursday night, they were eliminated in stunning fashion by the Rochester Americans in the North Division semifinal at the Adirondack Bank Center by a score of 4-2.

The series was tightly contested and contentious. The Comets and Americans are bitter rivals to begin with, and facing each other in a playoff series amped up the animosity. With each team winning two games heading into game five and the teams’ fanbases debating who has the better local cuisine, the atmosphere was electric in Utica on Thursday night.

The visitors opened the scoring at the 9:10 mark of the first period when defensemen Casey Fitzgerald’s wrist shot from the blue line made it through a screen and past Utica goaltender Nico Daws and into the net. Fitzgerald’s father, New Jersey Devils General Manager Tom Fitzgerald, was in attendance to see his son score against his team’s AHL affiliate.

The Comets answered back eighty-two seconds later when Fabian Zetterlund scooped up a loose puck at the top of the left circle in the Rochester and wired a shot past Americans goaltender Aaron Dell tying the game one and sending the crowd into a frenzy. Less than a minute after that, Alexander Holtz got his first goal of the playoffs when he took a Ryan Schmelzer pass, skated in, and snapped a laser of a shot over Dell’s blocker into the top corner of the Rochester net giving the Comets a 2-1 lead they would hold for the rest of the period.

A scoreless second period led to a tense third period with the Comets holding onto a one-goal lead to start. A little over three minutes after the period’s opening faceoff, that lead disappeared as Arttu Ruotsalainen redirected a slap pass from Fitzgerald past a surprised Daws to tie the game at two (the Amerks were on the power play at the time). Three minutes later Rochester took the lead when Sean Malone drove into the Comets zone and beat Daws with a wrist shot from the slot to make the score 3-2. There were just over thirteen minutes remaining at the time of Malone’s goal, but the Comets were unable to get the tying goal. The Americans sealed the game with one minute remaining when Mark Jankowski fired the puck all the way from his own end and into the open Comets net (coach Dineen had pulled Daws for an extra skater) to make the score 4-2 and send his team into the North Division final against the Laval Rocket.

For the last time this season, here are the three observations from the game.

Greer, Zetterlund, and Russo led the way on offense for the Comets.

AJ Greer put the Comets on his back, leading the way not only on the scoresheet but also from a physical standpoint. He was a constant thorn in the American’s side, led the Comets in goals with six, and tied for the team lead in points with eight. The player he was tied in points with was Fabian Zetterlund, who himself led the Comets in assists with six. Despite not playing game four due to a suspension, Robbie Russo led all Utica defensemen in scoring with two goals and two assists for four points.

Defenseman Reilly Walsh was an offensive force to be reckoned with for the Comets all season and was the main cog in driving offense from the blue line. After posting two assists in Utica’s 6-3 game one win, Walsh missed the rest of the series with what was revealed to be an appendectomy. Without Walsh in the lineup the Comet’s ability to break out of their zone and transition to offense was seriously hindered, allowing the Rochester forecheck to be much more effective.

Frederik Gauthier had not played for the Comets since the beginning of April due to an injury. By the time of the Gauthier injury, Utica had its playoff spot assured, but it was in the playoffs where his presence was sorely missed. The hulking center was a main penalty killer and faceoff man for the team and without him, neither aspect of the game was as effective for Utica. Without Gauthier, the Comets penalty kill operated at a 58.3% success rate, which was made more difficult by the fact the Americans have had one of the top power-play units in the AHL all season long.

It was a great season anyway.

It was a heartbreaking loss for the Utica Comets and their fans, but it was a fantastic season nonetheless. No one expected them to post a record of 43-20-8-1 for 95 points, all while setting an AHL record by winning their first thirteen games to start the season. The slogan for this season was “a new era has begun” and if this season is an indication, this era is going to be a very fun one for Utica hockey fans for some time to come. 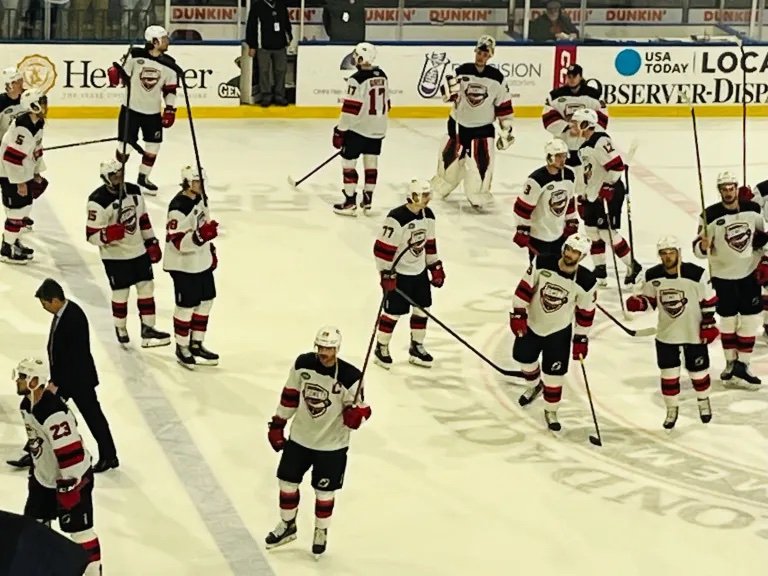